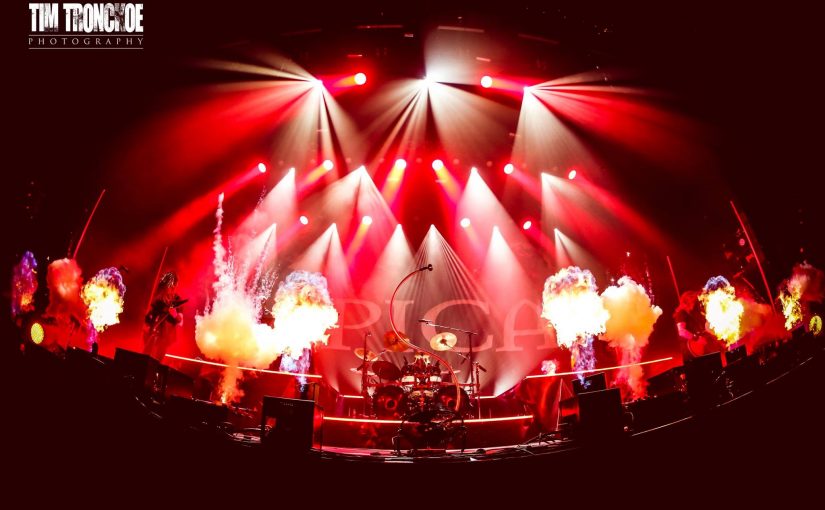 There are some excellent bands producing Symphonic Metal. Very popular and with some exceptional exponents, among them Nightwish, Within Temptation and Stream of Passion to name a few. So it is very easy for a few to slip under the radar, for me one of those has been EPICA, (which they define as Excellence. Power. Intelligence. Creativity. Ambition. on their publicity blurb). Hailing from the Netherlands and formed in 2002, “The Holographic Principle” is their seventh studio album, which they say is their heaviest to date.

As is often the case, prerequisite for the majority of these bands is a powerful/operatically voiced frontswoman and EPICA tick the box well and truly with the beautiful, flame haired Simone Simons. Guitarist Mark Jansen’s sonorous growls contrast like Beauty and the Beast, sometimes for me a little intrusive as I’m not a big fan of this sort of vocalisation. This is loud, heavy and bombastic music, with Gregorian and choral style chanting and the screaming guitar solos from Isaac Delahaye cutting a swathe through the cinematically orchestral embellishments of Coen Janssen’s keyboards. The thundering rolls of Ariën van Weesenbeek’s drums combining with Rob Van Der Loos’ bass foundations on which the arrangements are built.

The album opens with the miniature epic Eidola which is far too short for me, but a great introduction. It could have soundtracked the film ‘300’, conjuring scenes of a huge procession. Armoured elephants in gleaming gold cresting the horizon as thousands of battle hardened, marching infantry hammer the road before them, their feet smashing into the dust. Heat and sweat mingle as they haul huge war machines of mass destruction toward the enemy.

I would have liked for it to merge into Edge of the Blade, as I find the suddeness of the starting riff jars slightly with the preceding track. A small niggle soon forgotten as you are then carried along at a crashing pace with only the soothing vocals from Simone to give respite, before they reach for the stratosphere. There is a middling slow of pace before the growling hits with the guitars and you are hurtled into the maelstrom of battle again.

Plucked strings are crushed by the guitars as they issue in A Phantasmic Parade, and the war machines unleash a hail of deadly notes and choral choruses to assault your senses. A brief lull, then charging through the settling dust and smoke come the Universal Death Squad, screaming their war chants and brandishing weapons, lusting for blood and souls. Red rimmed eyes seeking foes and victims as they reap bodies like sheaves of bloodstained stalks of grain. Simone’s vocals and Isaac’s keyboards lifting the track beyond the onslaught.

A few retreating survivors fire back in the distance as orchestral swathes mix with piano before they are scattered to Divide and Conquer, Mark’s barked ululations at his marauding horde, directing their onslaught to demoralise the enemy, with the engaging Simone encouraging a memorable chorus at his side.

Exalting vocals precede celebratory instruments, orchestrated as they march Beyond the Matrix, Simone conducting the guitar verses, Mark gutterally picking off survivors on the wasted battlefield and guitars herald their affirmation to a rousing choral end.

Haunting Celtic violins bring an ease to the aggression as we wander Once Upon A Nightmare, accompanied by Simone’s voice and Coen’s piano, the orchestra and choir falling into line with the guitars and drums treading respectfully across the musical battlefield intensifying to a rousing dramatic end. Melodramatic choir, heavy riffs and driven drums crash in, with Simone adding gloss to Mark’s hard edged vocals. The layered orchestration and keyboards propelling us forward across the universe in search of answers to The Cosmic Algorithm, as the tune hurtles to it’s inevitable end.

Mr Jansen’s portents add gothic doom to the Ascension – Dream State Armaggedon, a brief verbal passage warning this is the end of everything as we know it, echoing the bands’ attempts to elevate themselves out of their comfort zone and progress their sound, morphing and fading out as drums and exotic strings bring a Middle Eastern touch to Dancing in a Hurricane. The addition of  Asian instruments like whirling dervishes dance between the band, swirling dust and sand in the heat of the music.

Lush strings and atmospheric piano soothe before you are bludgeoned by the propulsive metal of battle as the band Tear Down Your Walls, Simone and the choir flying above the destruction like avenging angels crushing all and everything in their path with their symphonic cannons.

And so we come to the grand finale, The Holographic Principle – A Profound Understanding of Reality, (even the title’s epic) and for me the band’s most adventurous track on the album. They have literally thrown everything at their disposal into this, creating a huge production. From the monastic chanted introduction, this veers from soft piano to orchestral swathes. The drama of the vocals against soaring guitar solos and pounding staccato rhythms ascending into the heavens to a headrushing climax.

I now have a confession, I had to take a break for a few days before finishing this review as the intensity of the album after five plays became a little overwhelming. There is no doubting this is an excellent example of the genre, but I would have liked to hear maybe a couple of slower tracks, even ballads to give this more balance and the faster, heavier tracks more impact. The ones that do start gently are quickly swallowed up by the band’s apparent enthusiastic attempts at progression and a slight release may have allowed the music to breathe a little.

That said it’s a cracking album and I am surprised I have not picked up on Epica before and I shall certainly be listening to the back catalogue and watching for future releases. If you like this genre and you have also passed them by I suggest you give them a listen.

All pictures by Tim Tronckoe Photography..