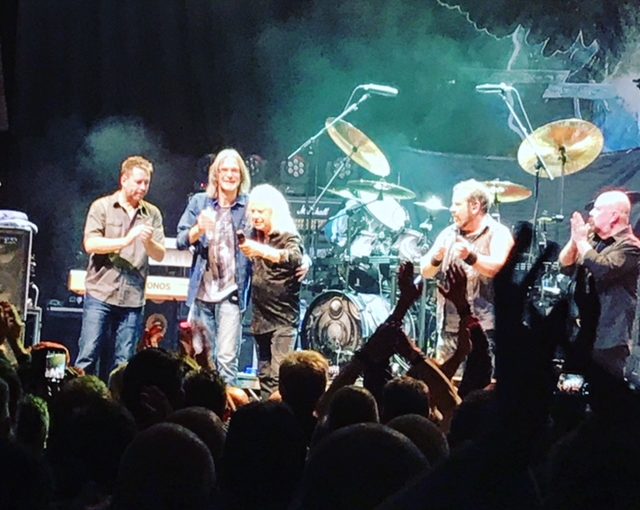 Let’s keep music alive. There have been many posts on social media about venues shutting down and sparse audiences for many live gigs but, if Magnum’s gig as guests of Saxon at Hull City Hall last Sunday is anything to go by then the older generation are happy to go out and support live music in their hundreds (if not thousands!).

Now I was there on a press pass to review the Magnum gig so you’ll not hear too much about the other artists here but, suffice to say, it was varied enough to suit all rock music tastes and while Rock Goddess sounded good from the bar (I was in the bar, not the band), Diamond Head were consummate performers with a drummer who was a dead ringer for Matt Sorum of Guns n’ Roses fame. However the vocalist just didn’t gel for me, not to say he didn’t have a good voice, it just wasn’t one for me. As for Saxon well, they put on a hell of a show, a very LOUD show which the packed crowd absolutely loved. There was a bit of argy bargy in the mosh pit at the front but a few well aimed expletives from a resplendently attired Biff Byford soon calmed that down. What a voice he has got too, you’d never guess he was nearly 70, he hit every note with power and glory. For me it was a shame that new material from ‘Thunderbolt’ just seemed to blend into one but the classic tracks like 747 (Strangers In The Night) actually threatened to bring the house down! For me Magnum were the definite highlight of the evening and put on one hell of a live show, Bob Catley wanders the stage like your favourite uncle nowadays but, boy, does he still have one hell of a voice. Opening the set with crowd pleaser When We Were Younger from ‘Princess Alice and the Broken Arrow’, the band never hit a duff note and silent assassin Tony Clarkin showed just what a genius he is on the guitar, orchestrating the band’s every move with precision.  A powerful version of Sacred Blood, Divine Lies (from the album of the same name) had the crowd in rapture as Bob’s partner in crime Al Barrow provided a bassline powerful enough to knock over mountains. It has to be said that Hull City Hall doesn’t have the best acoustics but the guys were on top form so it hardly seemed to matter, Tony firing off a wicked solo and the applause threatening to drown out the sound.

Next came the first (and title) track from the new album and Rick Benton’s first chance to really shine on the keyboards, I have a feeling Lost on the Road to Eternity is going to become a firm fan favourite at live gigs and seemed to fit the setlist perfectly. A wild rock ride with Bob leading the way, there were middle-aged (and older) people rocking away in front of me and it was great to see more than a smattering of young faces joining the fun. The slow burning intro of Crazy Old Mothers ramps up the anticipation of this anthemic track. Bob had the crowd in the palm of his hand on the emotive verse before Lee Morris leads in the mighty chorus with his thunderous drums. A song and atmosphere that just had you riding the crest of a wave with a ridiculous grin on  your face. We return to the new album for the balls out rocker Peaches and Cream with Tony’s hard rocking riffing and the energetic drumming from Lee leading the way. It’s hard to believe Bob and Tony are both over 70 as they can rock with the rest of them and, boy, can they write a banging tune! The crowd are starting to jump and wave in the air and the energy can be felt throughout the hall, Mr Catley still has huge lungs, his vocal power is amazing and his voice has lost none of its whiskey soaked edge. We head back to the 1980’s and the wonderfully evocative Les Mortes Dansant from the band’s classic album ‘On A Storyteller’s Night’ and what a spine tingling version it is, Bob’s voice and Rick’s keyboards have the hairs on the back of your neck rising. I’m surprised there were no lighters lifted up (or is it iPhones nowadays?). An emotional and truly stirring rendition with a compelling vocal and mighty guitar, wonderful stuff!

The new album has some excellent rock standards on it, as well as the already played Peaches and Cream there’s the excellent Show Me Your Hands where guitar and keyboard lead us on a rollercoaster ride of hard rock and Bob has virtually the whole audience raising their hands and swinging them from  side to side. I swear the applause, cheering and whistling gets louder after each song. Another classic from On A Storyteller’s Night’ follows and it’s a track I’ve not heard much, the hard rocking All England’s Eyes is accorded a great welcome from the knowledgeable crowd and the band proceed to give us a dynamic and forceful version of the song that, once again, has us all dancing and singing along. To my eyes (and ears) the guys are really enjoying themselves and are on top form tonight. Just when you thought things couldn’t get any better the band launched into a rocking version of the classic Vigilante (from the album of the same name) and it gets the audience bouncing even more, as soon as the highly recognisable riff begins they are off. Just like Bob actually, he is really on it tonight, his voice and presence commanding the stage and hall, everyone in the crowd are in the zone and enjoying every note. The mountain crushing rhythm section of Lee and Al go into overdrive on this song and you can feel it right in your solar plexus, I’m singing along to the chorus as if I was 19 again! Too soon it is time for the show to come to an end but Magnum go out with a bang with one of my favourite tracks of theirs. ‘Wings of Heaven’ was the band’s biggest album, released in the late 1980’s and spawned a few hit songs but it also contained the lengthy Don’t Wake The Lion (Too Old To Die Young), ten minutes of almost progressive tinged hard rock and we are treated to a superb version this night. Bob prowls the stage like the leader of the pride and the crowd are in rapt attention as Rick delivers the slow burning keyboard section. You can feel the tension rising in the hall as the music plays, Bob’s vocal building up to the compelling chorus and the crowd finally bursts out along with Bob to sing, “Too old to die young, too big to cry, too old to die young, say goodbye…”. I went along with some friends who didn’t really know much about Magnum and they were absolutely blown away, especially by this track and it surely took me back many a decade but that’s what music does, isn’t it? When a night is as good as this, it’s always a shame for it to come to a close but the guys finished to rapturous applause, cheers and whistles and a see of happy faces.

A fantastic evening of music and a wonderful performance from one of my favourite bands, music, for me, is fantastic and life affirming and live, like tonight, it just doesn’t get any better.