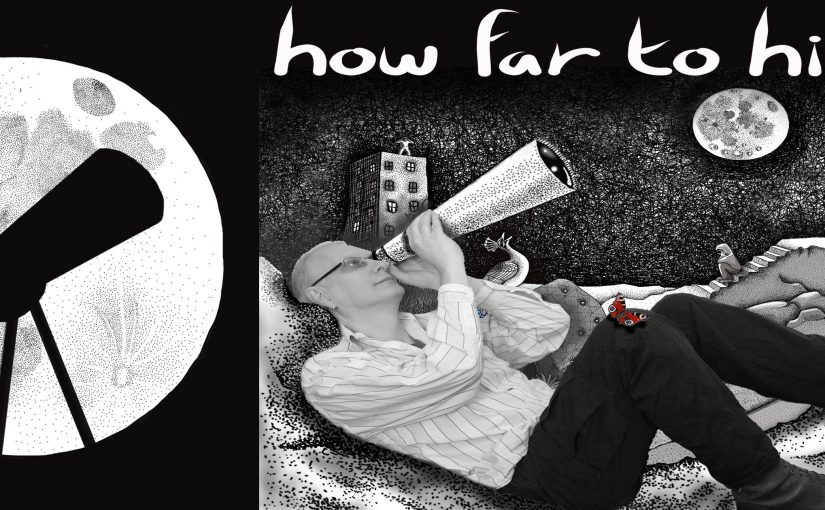 Here at Progradar Towers we are pleased to welcome Scott Evans of Encircled into the reviewing chair as he writes about How Far To Hitchin’s 2016 debut release ‘Easy Targets’.

How Far To Hitchin’s debut album ‘Easy Targets’ ,the music project of Paul Dews, is my current musical surprise and is enriched with that wonder of a new find. My route to discovery was the lazy scrolling of Facebook and then a sudden stop as an album cover liked by a couple of my like minded Facebook friends popped out , demanding attention, as many of my teenage album covers often did. The ‘Easy Target’ cover is a piece of art in itself that ticks that box of wanting to revisit and finding something new each time. Paul Dews himself did the artwork which gives you a hint of the genius that lies within the album itself.

Whilst this is not the first musical outing of Paul Dews, the blurb on his website would suggest this is the first album where production and composition were as important as each other , and you can tell. The production is first class, a constant of each song is how production is used as an additional instrument, it really is tremendous. The project is currently studio based and I can anticipate the difficulty of putting this into a live show (although I would love to see that) but, as The Beatles found out on ‘Sgt Peppers’, not thinking about how to perform something live gives you absolute freedom in the studio, Paul Dews has nailed this ethos.

Whilst mentioning the famous Beatles album, a comparison can be made in the very ‘Englishness’ of the ‘Easy Targets’ album. As each song unfolds so do the influences and lyrical content and it is so quintessentially English that again it fills you with a warm feeling and the temptation to accompany the album with a luke warm pint of cider. Other musicians credited on the album include E P Dulsaw on guitar, Wes Ladpu on Bass, Ade W Puls on Drums and Saul Pewd on keyboards; unless Paul spent a huge amount of time scouring the country for musicians whose names were made up of particular letters , I suspect this is very much a solo outing!

So onto the tracks. The album starts as it means to go on using great production techniques to grab your attention and ensure that you are listening as a voice spins around your head demanding you listen, Resistance Is Futile is a haunting track that wouldn’t have sounded out of place on one of Bowie’s latest offerings, Paul Dews’ vocal phrasing is very Bowie like throughout the album. Lyrically it’s a call to arms to get off your backside and don’t accept the status quo.  Our Friend Is In The Meadow is a beautiful follow up to the opener ,an almost childlike refrain builds to a memorable chorus and a gorgeous ebow guitar underpins a female spoken word section.

And then straight into Gladhander and 3 songs in you realise that pinning this album down to a particular genre is going to be difficult, and why even try, let’s enjoy its uniqueness. Like Mansun crashed a late 90s trance club, the lyrics attack persons unknown, the accompanying booklet art shows a five fingered snake and you get the impression of deceit and someone with style over substance. The lyrics throughout the album are quite scathing in places, in a very English way, sometimes hidden by beautiful melodies. The Peacocks Of Birkby is a gentle song that sees Paul wishing “he could be like them, rising above it all”. Whilst Collateral goes straight for the jugular lyrically like a post-apocalyptic rant , but ending with a wry smile of “at least the computer graphics looked cool” and, snap, we are in a completely different soundscape , very clever lyrics and vocal delivery make Push a charming song that twists and turns as fast as you can process it.

Grief Mining for me is one of the stand-out tracks of the album, the Gabriel- esque track starts with a slow build but opens up in magnificent glory with some stunning guitar work, an attack on so called clairvoyants praying on the vulnerable, the closing vocal refrain of “…money in the bank” brings the track to a close. Brilliant stuff. Helpless feels like an anthem for all those that have suffered with mental health issues, the lyrics read like a letter trying to express the difficulty of living with a condition and as the music blends with the lyrics in perfect unison it is hard not to get emotional, this really is a beautiful song.

Flowers From Burma is 80’s new wave material, scathing lyrics again but delivered in such a way that any malice is completely hidden. I’m going to use the very English card once more! A Blur sounding intro introduces us to some dubious neighbours fondly referred to as Shit Bags, such a great little track that certainly doffs its cap to ‘Park Life’ era Blur. Sick Little Monsters is back in Bowie territory, and addresses the disturbing fascination of viewing other people’s misery through media, criticising for “watching this poor man’s death..” and then closing with a plea to “do something, open your arms and catch him” and finally Secateurs, that feels like a memory of childhood , a melancholy close to the album but as beautiful as you are now used to with the album.

The influences are scattered throughout and there is no doubt that Paul Dews is a connoisseur of years of alternative pop music, but this is all delivered in such a unique way that comparisons are ultimately lazy. This really is a special album that demands repeat listens and stands as a nice reminder of why new artists deserve a listen, the rewards can be very fine indeed.