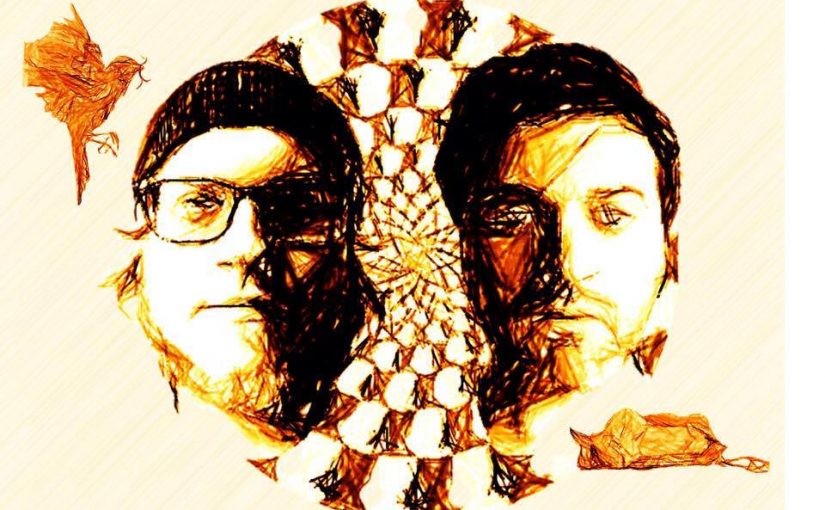 Facebook, it’s a funny little place isn’t it? A microcosm of the real world where everything is amplified and friendly joking can be taken too far where people misread the signals, and where braggadocio and one-upmanship seems to be the preferred method of conversation. Like so much other social media including Twitter, certain parts of it seem to be an endless stream of vitriol and anger, directed at others who are different, people you disagree with, people who aren’t ‘you’.

This is where Arc of Triumph come in, I was connected to the band (Simon Elvin and Rory Holl) through someone posting about reviewing the album on a friends timeline, and you guys know me, if there’s something new and exciting out there, and I can get to listen to new music and help a friend of a friend out, then hell I will do my best.

Which is how this duo’s debut album appeared in my inbox, and on my iPod (other media devices are available) and how it came to be one of my albums of 2017.

This record could probably not have been written and created at any other point in human history, where you have the alleged leader of the free world tweeting about the North Korean leader, less diplomacy and more like a little kid throwing stones.

You have the omnishambles that is the zombie Government of the UK trying to negotiate the worst possible deal on Britain’s exit from the European Union, frankly they couldn’t organise a piss up in a brewery, and you have the threat of ISIS, global warming, the lack of any global leader to come to any consensus for anything, and a resurgent Russia and China.

These my friends are what we call, interesting times.

Arc of Triumph, an ironic metaphor rather than a glory seeking name, take this rich and unstable tapestry and weave it into a rich and intelligent album all about the end of empires and collapse of great civilisations. After all, no civilisation knows it’s at the end of its reign until after the event.

These 10 tracks run the whole gamut from devious politicians to collapsing empires, and it’s a testament to the bands strength of vision that the whole concept hangs together brilliantly, and the album flows with style and grace.

Starting with the dynamic and great Brick and Brick, they lay put their stall with some funky guitar work, fab old school synth sounds and mature intelligent lyrics.

This is the combination of album as story, history lesson and grand concept, after all those who don’t learn from history are doomed to repeat.

Pulling off a trick that has been utilised by artists like the Beautiful South, Elvin & Holl pull of the juxtaposition of darker lyrics with a more upbeat sound, creating angular, spiky post rock sounds that fans of bands like Franz Ferdinand would find much to love.

This isn’t their only musical skill though, and to imply so would be doing the band a disservice. Unlike some of the more preachy end of music where certain more earnest songwriters treat their audience like children, there is no grand sermon style songs on here, no patronisation and by treating the audience as the intelligent adults that they are, Arc of Triumph manage to get the message across using the music and the lyrics and no trickery. Tracks like the brilliant My Town; evoking the images of fallen Egyptian Empires in their Pyramids and monuments to their ego, punches it’s evocation of arrogance and pride out with some driving guitar work and powerfully written music.

In contrast I’ll be Your Eyes pulls together everything that is wrong about the public being brainwashed by charismatic right wing leaders, who pull on some Daily Mail esque image of ‘wanting the country back’. It’s uncomfortable listening, as is probably the aim, due to the words of the lyrics repeated across the many platforms from twitter to Facebook to the front pages of newspapers, ‘pull up the drawbridge and pull down the blinds’. Sometimes the truth is uncomfortable, and there are no holds barred here, similar to last years ‘We’re all in this Together’ by IT, in the words of a former American statesman, it’s an inconvenient truth. But one we all need to hear.

Songs like Take it All With Us and Birthright deal with the ideals of greed and believing people can have anything they like, the sense of entitlement that pervades so much of society, and the constant drive for more that is ripping the planet apart underneath us.

With a broad musical palette to work from, these songs cross genres and become a fantastic musical melting pot of rock, folk, post rock, angular indie guitar mixing with lovely vocal harmonies, elements of folk rock and some genuinely prog keyboard sounds, which is beguiling, charming and utterly confident in it’s own sound and style.

The album, despite the dark message that runs throughout, particularly on the closing duo of This is What Will Happen, with it’s pop noir elements and dark Poe-esque imagery, evoking the Raven, and an almost Wishbone Ash ‘Argus’ era guitar sound, that features some sublime violin, the dark folk element of this brings the track to life and it’s repetitive beat and drive is almost tribal in nature. The closing Darker Shadows, at 7 minutes the longest track on the album, has some really magnificent mood music, powerful electronic sounds, pounding drums and some astonishing vocals.

This album is one that is definitely a grower; listening on my headphones you slowly absorb the atmosphere, the musical nuances, the intelligent vocals, and the passion. My goodness this album drips with passion and emotion. Considering this is a debut this walks all over new albums released in 2017 by bands who’ve been at it a lot longer and obviously aren’t as hungry or fired up as this dynamic duo. It is fresher, sharper, clearer of purpose and full of charm and depth.

Arc of Triumph have produced a triumphant musical arc, and one that I keep returning to again and again. Don’t let this gem slip under your radar. Your ears will never forgive you.