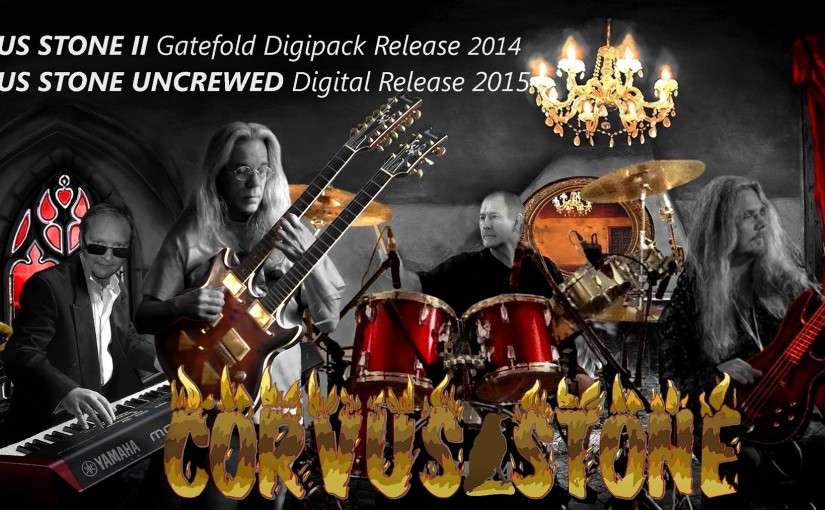 So I’ve let the lunatics take over the asylum for the last few reviews (I jest, they are all going to be worthy additions to the website) but it’s time I stopped shirking and took the Captain’s chair back….. “There’s a fine line between genius and insanity. I have erased this line.” – Oscar Levant.

After listening to the latest release from multi-national conglomerate Corvus Stone, I wouldn’t be surprised is that was the band’s mantra!

This is music that makes you smile, yes you could say they have poked too many badgers with sharp sticks but, I appreciate the sheer unbridled joy that is at the heart of their flippant and humorous output.

That’s not to say that they do not produce some excellent music, these guys are all great musicians at heart but they don’t take themselves too seriously. The band understand that a touch of madness can make something much more rich and varied.

“A band comprised of individuals, all with their own unique styles and approaches. You want predictability & an obvious theme on an album, you will not find it here (Or will you?). If you enjoyed radio stations like the ones that existed in the good old days (anything and everything), you will enjoy what you find here! They really do mix it up.

If you want to like what you hear in the first 30 seconds, again… look elsewhere but if you want music to grow on you as you get to know it, Corvus Stone’s music does exactly that. There is melodic content 100% of the time in everything they do. Sometimes there is singing, sometimes not.“

The so called ‘hardcore’ members of the band are Colin Tench (guitars), Petri ‘Lemmy’ Lindström (bass), Pasi Koivu (keyboards) and Robert Wolff (drums and percussion) but they add a stellar list of guest vocalists to the mix including Sean Filkins, Blake Carpenter and Phil Naro, just to name a few.

These guys never planned to form a band when they met on the internet. Recordings were made for fun and  it became obvious to them that this was different and had all the magic and surprise that rarely comes from a plan. Corvus Stone step in and out of “prog” within the space of one song!

After releasing two albums, one in 2012 and the second in 2014, this year sees them release ‘Unscrewed’.  An album released as a free “Thank You” for fans and on sale to everybody else.

It started life as a combination of unplugged new music and remixed old music but it has become something much bigger. A full blown album in fact! The opening track, Brand New Day, is one of the new compositions and is a full blown rock instrumental and fairly conventional, well for Corvus Stone anyway! Powerful rock guitar riffage and thumping bass steer the ship while Robert’s stellar drumming plays the anchoring role (see what I did there?). Uplifting keyboards add a really smooth gloss on things and it is a nice way to start the album. Early Morning Calls started it’s life as purely an instrumental on Corvus Stone II (as ‘Early Morning Call’), this modified version features both Sean Filkins and Phil Naro’s vocal talents, Phil adding ‘multi harmonies, doo wops and Di di di dum dums (yeah, me neither!). It almost sounds like a Beach Boys or Beatles track that’s had too many magic mushrooms, Colin also adding new and significant guitar work to the track. It is brilliantly nuts, keeps me smiling from ear to ear and really seems to sum up what this band are all about. A lot of the sense of humour is present in the track titles, take Joukahainen Without Chips for instance, bloody mental isn’t it? A new track that majors on organ and guitar, it is like and incessant earworm. It opens positively majestic in stature like the title character, a character from an epic Finnish poem but soon ebbs and flows between also being a lovely little unplugged delight. What drumming does feature is delivered by collaborator Paul Marshall.

Just a limited amount of re-recording was deemed necessary for old favourite Horizon, a short but brilliantly bonkers instrumental that has my imagination working overtime and brings images of clowns at a fairground playing this song with a maniacal glee. See what I mean, it’s nuts! The keyboard goes off with a mind of its own, Colin’s guitar has slapstick written over it and the drums and bass bound along just having fun. You just can’t beat it! Landfill is one of the latest musical creations and, once more, features Paul Marshall. Laid back, carefree and playful, it has something of a medieval tone and is quite processional. A song that is, in the main, unplugged but with some well placed percussion where it will make the most impact. A tongue-in-cheek nod to Monty Python to my ears. An extensive remix for After Solstice has also seen changes in the drums. A track with delicate sensibilities and some intricate guitar playing and one that seemingly always verges on teetering over the edge into delirium. Once the blue touch paper is lit, there is no getting off as it heads off at break neck speed with dizzying keyboards and manic drumming, a song that stares at the abyss and laughs it off as inconsequential. Another ‘lick of paint’ is all that JussiPussi required and there is a full on ‘box of frogs’ type of lunacy going on here. Darting and grabbing, you literally could be in a musical version of a Circus’ House of Fun. Off kilter and chaotic, it leaves you utterly wired. Scary Movie Too is a complete belt and braces, double in length reboot of Scary Movie from the first album. The band see it as a sort of ‘live’ version of the original track. Creepy and mysterious it almost crawls across your skin at the beginning in a Hammer House of Horrors fashion. Disturbing, it keeps you on edge as the musicians deliver a suspenseful tale through the ever expressive music. Crashing riffs and thunderous drumming make you almost jump out of your seat. Distorted squeals and sinister keyboards just add to the deliciously oppressive feel, I am just waiting for Vincent Price to come round the corner (if you’re under 35, you may need to look him up or ‘Google’ him, as the youth of today would say). Petrified in the Cinema Basement is a total reworking of the track Cinema and has a real Mariachi note to it as it bounds along at a jaunty pace, its metaphorical cap doffed to all and sundry. All knowing guitar and seventies sci-fi sound effects with a clear, starlit sky above. Double the length, as Blake Carpenter had always wished it to be, Lost and Found Revisited has gained a lot of new vocals, a second drummer and a lead break. Bringing some semblance of normality to the party with it’s military style drums and tasteful vocals, it is thoughtful, meaningful and quite evocative. Colin’s guitar seems to verge on a Mike Oldfield impression without giving it the full ‘Tubular Bells’ and it is probably the only song that actually leaves you in a calm state of mind. Tighter and more dynamic than the original alternate version of Cinema that was a bonus track on the debut album, Cinema Finale is, in my opinion, the best track on the album. Methodical, deliberate and precise, it is sombre, sensible and resolute. Colin really lets loose with some superbly intense guitar playing that really seems to be telling a story, the polished delivery of the keyboards adds gravitas and the uncompromising rhythm section adds real substance and sensibility. Jazzy, laid back and ever so slightly stoned, Pack Up Your Truffles brings some of the playfulness back. Another great addition to the new tracks on display, you are left in such a laid back state that you could almost be horizontal and in a world of polo necks and bad haircuts. Returning us back to the crazy world of Corvus Stone (liberties taken, I know) Moustaches in Massachusetts is a helter-skelter ride through the mind of an insane musical genius. Included as a bonus track because it is essentially unchanged, apart from a remix, it needs to be played loud because, at some point, you will realise that you are just as mad as what you have been listening to!

This album is flawed in places but entirely and eccentrically wonderful. Corvus Stone follow no path already trodden. Mad bad and brilliantly dangerous, whether you’ll come out the other side with all your mental faculties is another matter entirely.