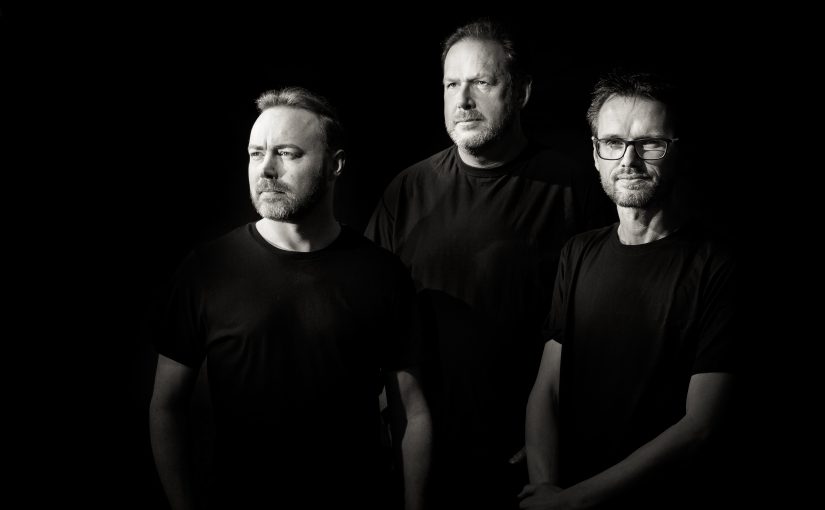 “Life starts when the end is near”

“My Arrival began life when three souls wandered into a single room with the intention to write music from a different perspective than they had done so before: shorter and accessible songs, without losing any of their intended intensity and progressive roots.

Their new album “Satur9 & Indigo” is intricate but elegant in sound. The music is made possible by the gentle weave of synths and guitars atop steady bass and drums, with vocals telling us the melancholic story of a man with a bleeding heart on a dying planet, desperate to find a new home.”

I do love a good press release and this one is no exception. Being a big fan of Sylvium, when Ben van Gastel (guitars & key) contacted me about this new project, I was very interested to hear what they had come up with.

Ben formed My Arrival along with Richard de Geest (vocals) and Fred Boks (bass, drums, keys), the music is closely related to Sylvium but with more relaxed, shorter tracks and is a bit more oriented to Art Rock, instead of prog.

Musically inspired by a changing world, the music was written with the intention to tell the story of a departure and a search for a new home.

Ben van Gastel: “All over the world people are looking for a safe home, not only because of war or climate change. Loved ones are left behind, hoping they will meet again soon, when they have found their new home. Richard de Geest has the gift of a singer songwriter.

He wrote the lyrics like a true poet! He takes you on this search for a new home with his voice, leaving no one untouched. Fred Boks is well known from Sylvium’s first EP release “Purified”. This time he has surpassed himself.

Being responsible for the mix and mastering, every sound is carefully balanced by Fred, sometimes twice or more! It was this finishing touch to take the music to another dimension.”

There is almost a melancholy feel to the album but it is overlaid by lush musical passages and a wonderfully relaxed atmosphere. The musicianship is outstanding and the quality of songwriting draws the listener into this immersive and deeply engaging musical experience.

There is substance to the music, a real primal, deliberate and thoughtful feel and Richard’s warm and substantive vocal delivery underpins and overlays everything like calming influence.

The album is bookended by a sci-fi feeling intro and outro and then the music flows through some mightily impressive songs, Gone with it’s highly emotive touch and the Pop/Prog of the enchanting Pale White Dot accompany you gently into the rest of this impressive album.

Things get more meaningful with the dignified and languid brilliance of Strange Machine and the sombre, forlorn feeling Saturn & Indigo. There’s an eruption of intensity on the powerful Null Echo which fades into the stark beauty of Come Undone, these superb musicians just keep on delivering sublime song after song.

You want a rather well crafted instrumental that ramps up the tension a jot? Well here’s Failure of a Grand Design to give you exactly that with its haunting and apprehensive atmosphere. Full Dark no Stars is a compelling three minutes of emotive vocals and stirring music and Close Your Eyes is as wistful a piece of music you could ever hope for but one that leaves a plaintive and reflective feeling in the pit of your stomach.

The album will be released on the band’s own label, Mey Productions, giving them further opportunity to learn, to grow and to be inspired, thanks to their audience. That’s all that My Arrival want to do – bring musicians together, make music with them, inspire their audience and let them discover their world and, with ‘Satur9 & Indigo’, they have made a hugely impressive and influential start.