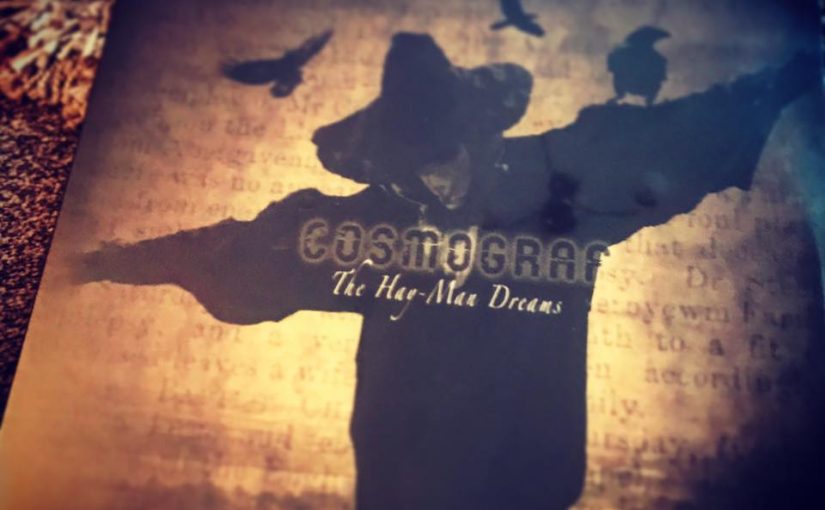 “I am careful not to confuse excellence with perfection. Excellence, I can reach for; perfection is God’s business.”
― Michael J. Fox

Surely every musician strives for perfection on every new record that they are working on but perfection cannot be attainable otherwise what else could they seek to achieve? When you follow an artist across their album releases you accompany them on this journey to a perceived nirvana of musical enlightenment, every release opening another door into their soul for clearly that is what every musician leaves with their music, a piece of themselves?

Robin Armstrong is the man behind the highly respected musical project Cosmograf, the Cosmograf sound is rooted in 70’s classic rock with a contemporary and progressive twist with obvious influences from classic progressive rock such as Pink Floyd, Yes and Genesis, but with more contemporary flavours from bands such as Porcupine Tree, Muse, and Radiohead.

Cosmograf albums are built around concepts – Conceptual Progressive Rock allows the freedom to span genres, stop and start in different tempos, with the inclusion of relevant soundscapes and effects to build the story.  This creates a musical freedom far beyond the commercial rules and constraints of a disposable 3 minute pop song. Robin’s musical odyssey began in 2008 with a rough demo called “Freed from the Anguish” and ‘End of Ecclesia’ which was self released in 2009. The break-through release that really brought Cosmograf to the music industry’s notice was ‘When Age Has Done Its Duty’, released in 2011 and the quality and excellence never let up through 2013’s ‘The Man Left In Space’, 2014’s ‘Capacitor’ and last years superb ‘The Unreasonable Silence’, a release where many thought Robin had actually reached his musical zenith.

However, an artist with the talent and imagination of Robin Armstrong can’t sit on their hands and, despite health problems (thankfully resolved now), Robin has returned with another Cosmograf release ‘The Hay Man Dreams’ which, for the first time, will be released on vinyl through Chris Topham’s Plane Groovy label. A retrospective album in both theme and style, ‘The Hay Man Dreams’ harks back to the sound and feel of the classic prog era fused with the raw energy and darkness of a rock behemoth. The 6 track album is measured at a single LP length and instrumentally delivers the vintage sound of guitar, bass and drums with a sprinkling of classic keyboards.

The theme presents as a mythical tale of a farm labourer meeting an early death, and leaving a loving wife and young family. His widow builds a scarecrow effigy as a shrine to her loss, and this ‘Hay-Man’ spends his weather beaten days in eternity, dreaming beyond his field. It’s great to see an album that was conceived to be a vinyl release from the outset, the packaging is excellent, as I’ve come to expect from Plane Groovy, and you get that frisson of excitement as you remove it from the shrinkwrap and take the slipcase and liner notes out of the sleeve. The singular artwork is very impressive and really stands out. Time to take it out of the slipcase, put it on the record deck and lower the needle…

The ominous and suspenseful opening to the first track Tethered And Bound raises the hairs on the back of your neck and David Allan’s atmospheric voice-over just helps to build the tension. The eerie feeling continues before a powerful and methodical guitar riff breaks through the uneasiness and Robin’s distinctive vocal adds an authoritarian tone. This song is pure and definitive Cosmograf but turned up to 11 with emotive guitars and mountain moving percussion provided by Kyle Fenton. It’s like the best of progressive rock met math-core and morphed into something quite unique. I love the creeping tension that lies throughout the song, it’s almost like hiding behind the sofa watching Doctor Who when I was a kid but brought bang up to date for the 50-something adult I am now. A really powerful, imposing piece of music that dominates its surroundings with Rachael Hawnt’s vocal talents also put to good use to add even more theatre, a thunderous start to proceedings.

Trouble In The Forest is a massive contrast with its wistful, gentle nostalgic opening that is full of the feeling of lazy, hazy sunny days and a forest with the dappled sun’s rays lighting up the forest floor. A wonderfully calm and collected track full of assured grace and composure. There’s a feeling of longing to the elegant, ethereal guitar and contemplative percussion that gives an otherworldly aura to the music. I can’t imagine a more laid back song that I’ve listened to this year as Robin’s voice finally joins in, all soothing and tranquil and with a meditative timbre to it. The tempo increases slightly, a note of urgency bleeding into the vocals before another voice over from Mr Allan sets the scene. The gentle meander and preamble takes on a slightly discordant edge as the immediately recognisable tone of Matt Stevens’ guitar opens up and he goes into Guthrie Govan mode with an intricate and convoluted guitar solo that only a guitarist of Matt’s talent could ever hope to deliver. The snaking, coruscating guitar work fits in perfectly with the almost spiritual ambience of this song and the ambient effects add even more mystery as this superb piece of music comes to a serene close. “The motorway extends in grace, the shiny metal’s keeping pace
The engine’s calling out to me, rev it more and let it breath
Let it breath…”

A stylish acoustic guitar motif opens The Motorway with an assured note, another tell-tale Cosmograf sound that is instantly known to this reviewer. It lulls you into a false sense of security as it gently ambles on before Robin’s emotive vocal begins, backed by Kyle’s classy drums and a real 70’s sounding keyboard, Rachael’s carefully considered backing vocals adding lustre. Everything seems good natured and jaunty as the song moves along at a measured clip but the mood changes as Robin’s voice switches to a more ardent intonation and the whole song seems to transform into something altogether more serious, sombre and thoughtful. A thunderous riff emerges and the drums go all native on us as Robin turns into a seriously heavy rock vocalist, all dark and dangerous, it’s quite an about face, I’m thinking 70’s Deep Purple or Bad Company myself. A sultry break with more of that acoustic guitar calms things before Robin opens up with a superb guitar solo that literally pins your ears back to the side of your head and screams passion, fervor and feeling at you (yes, it’s air guitar time!) before the song comes to resounding close and so does side one of this utterly captivating and arresting vinyl release.

A deliberate and pensive piano opens Cut The Corn, the first of two relatively shorter tracks, and this precedes Robin’s instrospective, absorbing vocal, full of sentiment and warmth and yet there’s a melancholy edge that runs throughout the song, a yearning and a longing for something out of reach and this adds a fragile beauty to the whole track. The tempo is deliberate and restrained and adds to the mournful sense that emanates, even more so when the reflective and thoughtful acoustic guitar is played to the captivated audience leaving you lost in thought as the track comes to a close. The emotion, passion and fervor reach a climax on the wonderfully stirring and affectional Melancholy Death Of A Gamekeeper, a track where, if I didn’t know better, I’d have thought Robin had co-opted David Gilmour into appearing. The whole song is a complex blend of emotions from Robin’s sultry vocal, Kyle’s elegant drums and the flowing keyboards but it is the incredibly impressive guitar work that really stands out and makes this a song I keep returning to time and time again. I could sit and listen to the searing, powerful and ardent playing all day long, this is music that moves you on a primal level and stirs the soul, I can’t get that guitar note out of my head and I don’t want to either. Touches of Pink Floyd? Yes, but it’s an affectionate nod of the head, not a blatant copy and I think it works fantastically well.

“The rain comes
It soaks his worn out clothes
I follow everywhere he goes
Hay Man dreaming of the sun
Hay Man are you having fun?”

Well, it is going to take something really special to top that and, to Robin’s eternal credit, he just gets on with it and produces another instant classic with the title track The Hay Man Dreams. From the first exquisitely delivered word that Rachael Hawnt utters we are given a song that will stand the test of time and should be considered a classic of the genre. Rachel’s hypnotic vocal is utterly beguiling and enthralling and the guitar, bass, drums and keyboards ooze style and sophistication. A track for late nights, darkened rooms, powerful red wine and forgetting about the complexities that life throws at you. The longest song on the album at over twelve minutes, not a second or a note is wasted and Robin delivers possibly his best guitar work yet with playing that bewitches, dazzles and delights even the most seasoned hack, just sit back and enjoy. That’s not all though, it’s a song in three or more parts and the mood is broken by David Allan’s voice over one more time before things take a darker turn as the carefree jazz/blues guitar is overwritten by a more compelling and aggressive riff, the drums dominating and Rachel delivers an outpouring of passion and fervor as the atmosphere turns chaotic around her, as if a tornado has hit the Hay Man. All of a sudden an argent and incandescent guitar solo breaks loose irradiating the sky, a furious and dynamic piece of guitar playing that hits you right in the solar plexus. This thunderous refrain comes to a sudden halt to be replaced by the elegant strains of Rachel Hall’s violin and order is restored once more. The album closes out with a feeling of pastoral calm and relaxed repose as the needle comes to a stop and silence settles around you.

What an incredibly emotional roller coaster Robin Armstrong has taken us on. I have no qualms in saying I have always been huge fan of his music and on ‘The Hay Man Dreams’ the sheer scope of his songwriting and imagination is barely conceivable. Cosmograf albums are lovingly crafted nuggets of musical brilliance created not for commercial gain but for the enjoyment of the listener and, on this latest opus (especially as it is available on vinyl), Robin has delivered his most impressive work yet. Perfection? maybe not but it doesn’t get much closer than this.

Buy ‘The Hay Man Dreams’ on vinyl via Burning Shed

Buy ‘The Hay Man Dreams’ on CD and Download from Cosmograf