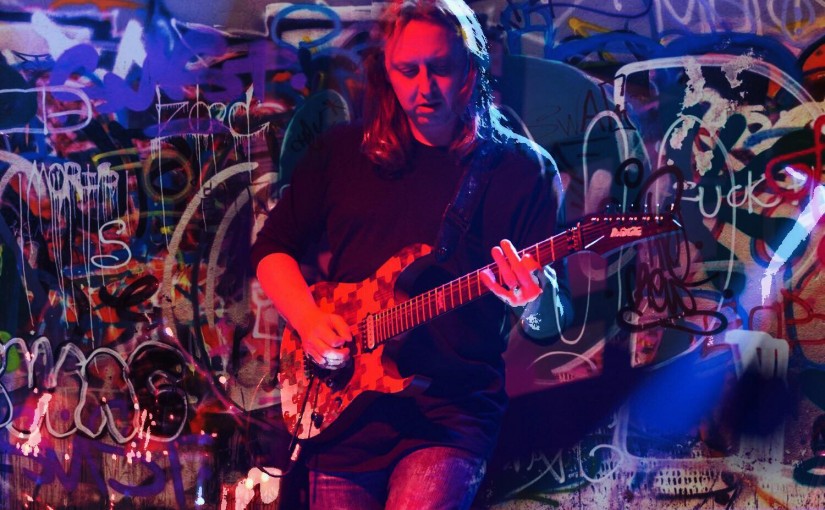 Let me get one thing out of the way straight away, I don’t think The Dave is the best name for an artist. Only Dave Foster will know why he didn’t use his own name for this solo project but I just wish he had, my opinion only, mild rant over.

Dave Foster will be better known to you lot out there as the guitarist with noted Northern rock band Mr So & So, progressive stalwarts Panic Room and for being the guitar player and co-writer in legendary Marillion guitarist Steve Rothery’s band. It goes without saying that his CV is pretty impressive.

Now Dave is currently in the process of writing and recording a new solo album (thankfully using his own name) called ‘Dreamless’ so it seemed the right time to visit his debut release from August 2011, ‘Gravity’, and give it the Progradar ‘going over’.

I’m a sucker for great album art and the cover design for ‘Gravity’, by leading artist Antonio Seijas, is very striking indeed. A good start then but let’s check out the music and see what The Dave has in store for us…. ‘Gravity’ is mainly an instrumental album but there are a few vocal tracks and my first impression is that it gives something more than your average guitar guru’s solo album.

First track Tesla could be straight out of the Joe Satriani songbook with intricate guitar histrionics. There are enough searing licks, riffs and solos to keep even the most avid guitar nut happy and it shows straight from the off that Dave Foster is one sublime guitar player. Convoluted and extremely intense, it is a thrill-a-minute hell ride on the flaming vapour trails of Dave’s fluid guitar playing. You just know from the title that Summer Sky is going to be a real feel good track and it doesn’t disappoint. Like a gentle amble on a lazy summer’s day it asks nothing of you other than to listen and enjoy. The keyboards and drums lay down a silky smooth foundation on which Dave can build with his supreme guitar playing. There is a fluent feel to the music as it flows serenely around your mind. Fast paced but never hectic, you set off on an unhurried journey and arrive calm and collected.

Paradox is the first track co-written by and featuring Dinet Poortman on vocals. This is a more straightforward rock track, very much in the Panic Room vein, and, as such, the guitar takes a step back. Dinet’s vocals are rich and luscious and add a velvet coating to this thoughtful song. Not what you were expecting on a guitar based album? Does it matter?, not one jot, it actually adds another dimension to this already impressive album. Back to the instrumental but with a much more serious and sober feel, Liberty Bridge is dense and pensive as a whole. The guitar drips sincerity and ennui then, occasionally, the light seems to break free and shine brightly. There is something crucial and weighty at the heart of proceedings, the sense of adventure generally reined in but, when it does manage to break the stranglehold, it illuminates with a fiery light. Polarised is an electronica edged pulsating industrial metal track that feels like it has the weight of the world on its shoulders. Dave (I think it’s him) provides a downbeat vocal that is all determined and no-nonsense and the guitar riff could have come from the depths of Motorhead’s debased mind, all dirty, edgy and darkly humorous. Fans of 90’s band Ministry will love the thundering guitars and restless keyboards and the guitar solo that closes out the track is pure, sublime theatre. Dinet Poortman returns on Only A Lullaby, a halting track that takes on a symphonic, female fronted metal mantle. Within Temptation and Nightwish come to mind but this is taken to a higher level. There is something dark and dangerous hiding in the shadows, an alien intelligence that gives this song something special. Once again, Dinet’s vocals are really special, she has voice that infiltrates your whole being and it works brilliantly with Dave’s coruscating guitar note which, on this track, burns slowly igniting something infernal inside you.

Apollo 13 is the most complex and elaborate song on the album, blending intricate, brooding sections of music with voice overs from the original space mission. It has a real sense of history and nostalgia to it and occasionally opens up into a heightened and passionate outpouring of brilliant guitar playing. Where the other tracks on the album seem to leave you to get on with your life as you enjoy them, this one demands you stop what you’re doing and give it 100% of your attention. A mesmerising, winding musical journey through space and time and one which clearly showcases the incredible talent that this man has. Shall we do smoky, burning blues guitar? Indeed we shall, Shining Light is a little gem of a track, heartfelt vocals and acoustic guitar lay the heart on the sleeve but it is the fiercely intense guitar that is the star of the show as it affects every fibre of your being. Lay back, close your eyes and enjoy this ardent piece of music. Despite being only fifty-nine seconds long The Wait is much more than just an interlude. it is one minute of acute musical pleasure as the effects laden guitar leads you into a place of calm contemplation from which you really have a hard time leaving and it segues perfectly into the final track The Bride. To my ears there is a little sense of loss and melancholia to this delightful song. It is not immediately evident but it is there hidden under the graceful layers of guitar that are presented to you. A slight sense of regret that soon fades perhaps, this song brought up hidden emotions and a lump to my throat as the elegant and exquisite guitars lightly dance across your aural receptors. A real cornucopia of guitar playing delights, as it comes to a close I just sat there in silent appreciation.

So, if ‘Gravity’ is anything to go by, we are going to be in for some hell of a treat with Dave Foster’s new album. Admittedly I am a huge fan of instrumental guitar albums but this one is up there in a higher echelon than most of the rest. An album that, if you don’t already have it in your collection, you should head to the link below post-haste and buy it immediately.