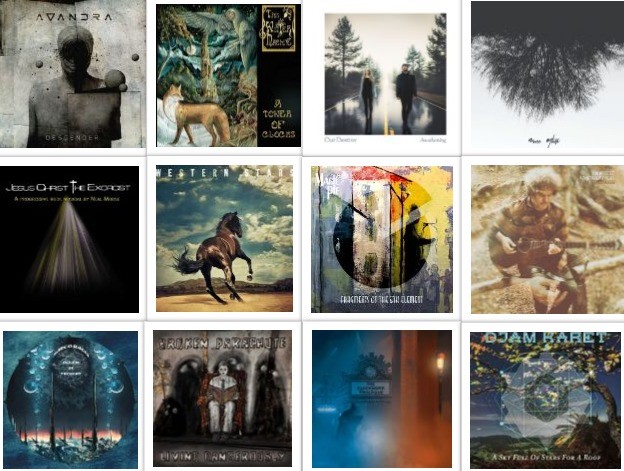 As most of you will know, I’ve taken a back seat for the last six months when it has come to reviewing albums. Now, while I may occasionally step back into the ring and write a full review, going forward I will be recommending a few albums with , hopefully, a few well chosen and pithy words of description.

Released on April 26th, Descender, the sophomore album from Puerto Rican prog-metallers Avandra, is an incredibly mature and complex record full of thunderous riffs, intelligent vocals and catchy hooks. In a genre well known for formality, this act with the most humble of beginnings have unleashed something truly different and special and with an impact similar to prog metal legends Dream Theater’s own career defining second album Images and Words.

A Tower Of Clocks is the long awaited second album from multi award-winning UK progressive rock band This Winter Machine. Almost 2 years in the making, this new release has the band tackling universal themes such as time, loss and identity within a loose conceptual framework.

With a feel of early Genesis and Fish era Marillion, the band haven’t strayed too far from the accepted progressive rock path but this album has been created flawlessly and with obvious affection and the musicianship on show is second to none. The impressive songwriting weaves captivating tales that draw the listener into the story and keep them there as willing companions on a spectacular musical journey.

I liked it that much that I bought the vinyl…

Our Destiny is the brainchild of Vikram Shankar (keyboardist of American progressive bands Redemption and Lux Terminus), whose piano playing on Awakening is paired with the angelic vocals of his partner Lauren Nolan. Awakening showcases the duo’s unique synthesis of genres and stylistic approaches, with emotive progressive rock married to pop, singer-songwriter, alternative and electronic flavors.

Vikram is a multi-talented musician of considerable skill and he shows his lighter side on this most graceful of recordings. A collection of ethereal, wistful songs that lend themselves to Lauren’s spectacular vocals perfectly. In a world full of chaos and anger, this wonderful record delivers some calm, elegance and decorum. An injection of peace into your soul, truly breathtaking.

None Other is a prog rock power trio from Volos, Greece who have released three albums since 2012. The brainchild of Spyros Charmanis, this eponymous third album is a sometimes brutal voyage that leaves no mountain unmoved and no stone unturned in its compelling forty minute running time.

Thunderous guitar and monstrous bass combine with the mighty drums and authoritarian vocals to deliver an addictive aural assault. Not for the faint of heart but a truly forceful piece of music that is definitely worth your time and attention.

“Jesus Christ – The Exorcist” is a monumental project in Neal Morse’s already impressive discography. A Progressive Rock Opera 10 years in the making, it was written and produced by Morse and includes performances by Neal and an all-star cast of vocalists and musicians. Featuring about two hours of music that encompass all the spectrums and genres Neal Morse is known for, the album will, of course, tell the Story of Stories.

Yes, I know, it’s not exactly progressive rock but then that’s not all I listen to anyway. Western Stars is a wonderful album and one that everyone should have in their collection, it is that good! Forget the fact that it’s a Bruce Springsteen record, that really is irrelevant here, what it is is a truly memorable collection of beautiful songs that show a calm and reflective side to The Boss.

Take the title track, you will not hear a more captivating four and a half minutes of music this year, believe me. Chasing Wild Horses, Moonlight Motel, Stones and more, thirteen tracks of perfect Americana and country music that some are calling Springsteen’s best release in years. Now I can’t comment on that but I can tell you that it is currently my album of the year and it will take something incredible to move it from that spot, a truly special release.

Fragments of the 5th Element is Magic Pie’s long awaited 5th album, made up from 5 tracks  showcasing the band’s very diverse influences. On this record, they have tried to steer clear of the sterile perfection which modern prog bands have a tendency to get caught up in – and have gone for a slightly more unpolished sound, a bit rough in the edges. A little more ‘bite’.

From the incredibly infectious and upbeat opening salvo of The Man Who Had It All to the mighty bombast of the epic twenty three minute album closer The Hedonist Magic Pie have delivered joyous symphonic prog perfection. Epic, energetic melodic and sometimes heavy  prog rock with splendid vocal harmonies and great musicianship, this album has it all!

Norrie McCulloch is a singer-songwriter and award-winning visual artist originally from Ayrshire he currently lives and works out of of Stirling, Scotland. McCulloch’s songs are a tangle up of folk, indie and country influences that manage to stay true to his Scottish roots, equating to a style that offers a welcome touch of originality.

Compass is this talented musician’s fourth full length album and builds on his unique blend of Caledonian Americana with exquisite songwriting, plaintive, heartfelt vocals and pared back instruments to deliver his most fulfilling and accomplished release yet. There’s a simple, stark beauty to these tracks, a feeling of a heart laid bare, a truly emotive collection of tunes that leave you emotionally spent.

“Oceans of Thought” was originally called “The Merchant of Eternal Youth” but during the time of the recordings Marcohad some personal problems and was a little depressed. So the songs, the cover but above all the lyrics, have undergone a change because the music comes from what he has inside his mind and soul.

“So this album talks about the difficulties that life sometimes brings us, but also talks about how to try to overcome them. It’s a record that I care a lot about because it talks a lot about me.”

I’ve always been a big fan of this outrageously talented musician who delivers some intelligent and thought provoking progressive rock with an undertone of eastern promise. Care is lavished on every aspect of the recording and Marco enlists the help of some highly talented individuals to deliver his most intense and complete album yet, a thoroughly engrossing achievement that rewards your complete attention.

Check out Open My Arms with Norwegian guitar maestro Bjørn Riis, a contender for song of the year.

Living Dangerously is the band’s second release, coming six years after the first and is described as a “Sonic cocktail on the rocks blending equal parts classic, progressive jazz and blues and cheekily spiking with whatever they found lurking at the back of the cupboard…”

There’s bits of King Crimson, bits of Van Der Graff Generator and a whole lot of intelligent, sharp-suited songwriting that has gone into this album and its stays just on right side of being too clever for itself. Broken Parachute craft some impressive tunes on this release and its another album that requires a lot of you time and attention to completely reward but, trust me, it is worth the effort. The blues soaked guitar and jazz infused keyboards are utter works of art and are worth the entry prize alone.

How do you follow the monumental three disc wonder that was Gandalf’s Fist’s 2016 epic The Clockwork Fable? With a two disc prologue, that’s how!

The Clockwork Prologue is the first release for Gandalf’s Fist as a six-piece and returns the listener once more to the dark and steamy city of Cogtopolis, a city beneath the surface, the once safe shelter for post-apocalyptic mankind, now a microcosmos following its own crude laws, rules and religions.

I called The Clockwork Fable, “A mesmerising musical masterpiece epic in scope and utterly breathtaking in its delivery” and this companion piece takes what the first release gave us and adds to it with the bands’ singular flair for drama, theatre and the spectacular. The stellar cast of voice actors, including Mark Benton and Bill Fellows, return to give a familiar feel to proceedings but its the musical talents of the band and the ever impressive vocals of Keri Farish that are the real draw.

The Clockwork Prologue isn’t meant to reinvent the wheel, it is meant to add to the wonderment of the original album and Gandalf’s Fist have delivered that in spades.

A Sky Full of Stars For A Roof is Djam Karet’s 19th album. The group was formed back in 1984, and this is a celebration of the band’s 35 years together.

With an almost spiritual feel to the intricate music, this collection of tunes has a raw feel, almost primeval, literally music that has come from the Earth. This band always produce thought provoking pieces that take the listener out of any comfort zone and take them on an intensely melodic musical crusade and A Sky Full of Stars For A Roof is surely the pinnacle of what Djam Karet have been producing together over all of their 35 years as a band.

So, there you have it. The first in a relatively regular feature on my recommendations. See you soon for the next Progradar Recommends!!