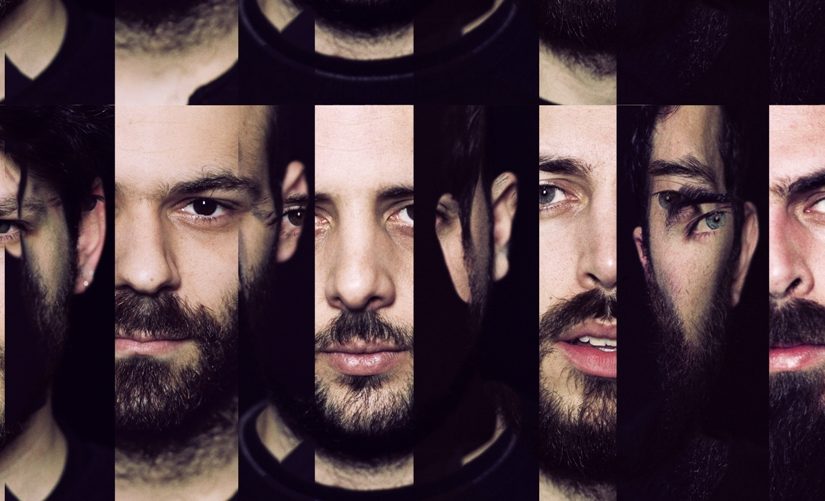 Playgrounded is a Greek band born and forged in the heart of the financial crash post 2007 and whose first album ‘Athens’ is a narrative of Greece and a Greek youth in crisis and ultimately the European Project. They moved to Rotterdam to explore their music more, in their own words “Heavy Rock meets Electronic”, this is of course is not happy joyous music.

‘In Time With Gravity’ is 8 tracks of music but, technically, only 6 as the final track is a long form piece subdivided into 3,  The Stranger, based on the Albert Camus book of the same name which can be summarised in Camus’s own words.

“‘I only meant that the hero of my book is condemned because he does not play the game.”

I will let that dangle for a while as I explore the rest of the album and return to it later.

To begin properly at the beginning, The Crossing, the meaning of this song eludes me if I am honest. It could be a metaphor for their journey from Greece and learning to connect to a Northern European culture? It could also be a metaphor for the journey of the refugees making a similar journey or I could well off the mark. Musically it is very dark and electronic driven with an understated but definite slow grinding guitar work woven around the main themes.

Mute is a definite stand out track on this album for me. There’s big sounding and very powerful guitar work but not in a way that swamps the rest of the music. They manage to sound big and yet leave space in the music, it is a trick some of the other Prog metal bands could do with learning if I am honest. There’s an addictive guitar hook that repeats often enough to become an ear worm.

Waves, now this is to me where the band show their influences at their clearest. A song of a wasted generation lost in the turmoil of politics and chaos of the times. Playgrounded have played on the same bill as Anathema and Riverside and they are very comfortable musical bedfellows here.

In Time with Gravity is the title track and the most electronic based track on the album. I have not heard ‘Athens‘ so it could be a hangover from the past or a hint at the direction to come but it has a lighter tone and feel to it almost but not entirely optimistic in outlook. I suppose this is as close to a love song as this album has but a pop song it isn’t. Coming in at over 10 minutes long it has plenty of time to explore the themes and melody and give a few opportunities to have off-shoots and pathways to explore. Rotterdam is obviously the band trying to express their first experiences of living in a new country and finding their feet, moving to be as close to the heart of Europe as they could to see where the music could take them. Musically the main driver here is the bass line and keyboard sequencing.

Finally we Return to The Stranger, I will be honest with you here, I only know of the book but  have never read it. Praise the internet and a cheat sheet to help me with cross referencing Camus’ book and the tracks that make up the whole piece based on that tome. In short man attends his mother’s funeral then kills someone and is then sentenced to death. The primary character, the Stranger of the piece is an outsider of the society that he inhabits and ultimately that society destroys him because he is an outsider.

“‘ I only meant that the hero of my book is condemned because he does not play the game.”

The three parts “Funeral”, “Killing” and “Verdict” break down the story into its component parts. It expresses the film noir of the 50s French film scene very well and how the outcome of one who is outside the whole is doomed in one way or another, in this case execution by guillotine. The Cure’s ‘Killing an Arab’ is based on the same book.

I have avoided genres here as much as possible in this review as I honestly think that these guys sit apart in many ways from any specific genre or type. I have chatted with a couple of fellow DJs about it and they agree, they sit in an area of their own BUT I am going to make a few comparisons and references for people who have an interest.

Dark moody emotional and different are good words for these guys. If you have a liking for mid/ late period Anathema, NIN, some of the slow grinding Black Sabbath with added late Depeche Mode and Gary Numan for a little spice then this could be for you. If you want happy and lightness with lots of sparkling unicorns then i would suggest that you steer well clear!

I have a feeling that live these guys are far less restrained and rip it up good and proper.

Order ‘In Time With Gravity’ from bandcamp here