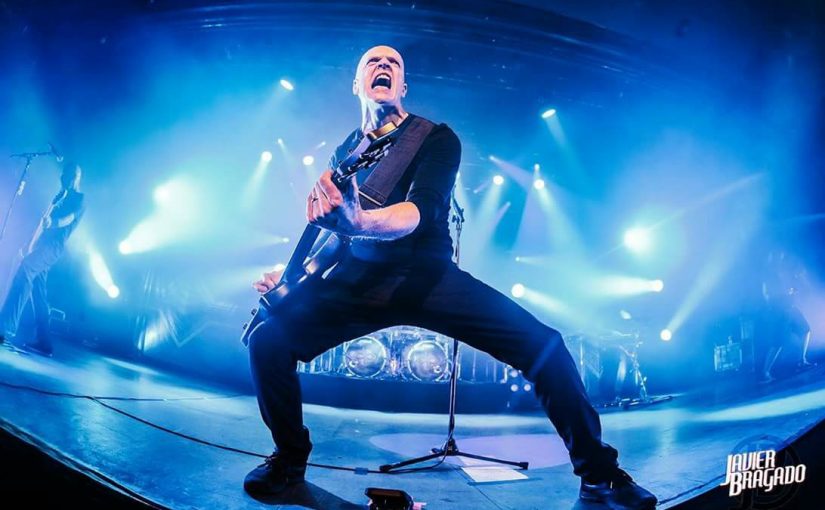 When I hear of bands with project in the name, I get a kind of pre-conception of what I’m going to be listening too. When the main artists name precedes the project I’m pretty certain that I’m going to be hearing a vanity project, some sort of self-congratulatory audio jerk off; a look at me, ain’t I clever piece of work. Not that there is anything wrong with that as often the artist is right, they are that good. They are entitled to show off and give it large. Like Muhammed Ali in his pomp, some projects own the ring they are in and they create an enigmatic aura of musical invincibility. They say, and prove, with some justification, this is great stuff, you WILL enjoy it.

Often the reason this arrogance is successful is because it is done with an element of tongue in cheekiness, a knowing sense of not taking things too seriously. And this is something achieved by the Devin Townsend Project with glorious aplomb. The live album that dropped into my inbox last week is a majestic piece of over the top, bombastic, showing off, rifftastic and oblivion inducing noisiness; a symphony of a tight and talented band being directed by the Project leader to create amazing sounds that help provide contrasting visions of the discordant ingredients that make up this performance on record.

As a reference point I couldn’t help but think back to the early 1980’s and one of the original, and often underrated, exponents and developers of science within electronic music, Thomas Dolby. In 1982 he released his ‘Golden Age of Wireless’ album which was chock full of ideas that invoked scientific exploration and discovery. Which is something that DTP seem to have taken on and updated for a 21st century guitar driven band. Quite honestly, like Dolby, there are great parts of this album that are just completely bonkers, mad as a box of frogs, completely and utterly deliciously loony tunes. With my headphones on, listening to this album, I imagined a band with Christopher Lloyd playing guitar, Dr.Frank ‘n’ Furter on bass and Dr.Frankestein on drums. It is seemingly a live performance directed by Tim Burton in one of his more weird moments. It is a triumph of surrealist bombasticness, an opera of madness, a cacophony of crazy.

The thing with this album and project is that there is a lot thrown at it. But it works. From the choir that moves between sounding like a southern gospel group through to Russian sailors, often in the same song, to the crashing meld of guitars and drums, this live performance treads the thin line between being too over the top, too pretentious, too silly whilst still having glorious moments of sheer, unadulterated and joyful, scenery chewing genius. Referencing a stand out kitsch cult cinematic moment of the early 80’s, if a director somewhere wished to remake Flash Gordon, then the Devin Townsend Project would have to be top of the list for the soundtrack. This live performance is fabulous, brilliant, funny and glorious.

Order this from Burning Shed here