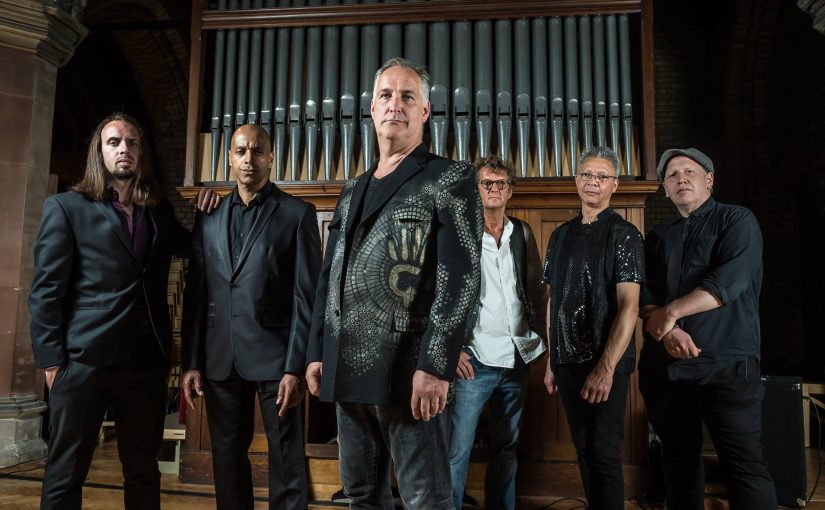 Antenna, the diverse fourth album from The Gift signals a significant change in direction and style for this London based band, driven by a fresh and accessible impetus. In a recent interview Mike Morton of The Gift summarised their new album as focusing on the ‘Difficulty of being Human’, and added that it was about ‘communication missing the mark’ which he encapsulated in the metaphor ‘Broken Plugs and Sockets’.

This is an ambitious and brave project, leaving behind their previous leanings towards more ornate ‘prog’ sounds so one has to ask did they succeed in the communication hitting the mark and connecting?

What is very clear right from the start is that this is a band that has chosen not to stand still or remain in a comfort zone. We are Connected is a striking opening song, with slight echoes of INXS, riding on an insistent guitar riff and threaded throughout with a popping synth backing, indicative of the subject of electronic obsession with social media. Mike Morton sounds angry as he spits out:

A myriad of souls, We have abandoned all controls,

Naked to the core, exposing our emotion

The songwriter, David Lloyd, explained in the same TPA interview :

‘It’s about the way in which people have sold their soul to social media… the way people can be damaged or manipulated without really realising it, just through participating in it. It’s got a corrupting side to it.’

This opening is important as a cracking introduction to the album but also as a very clear marker that this is The Gift like you’ve never really heard them before, and they have moved a long way from the expansive and mythically influenced previous album ‘Why the Sea is Salt’. If that album’s lush oil painting like artwork by Mark Buckingham reflected their epic musical canvasses of ornate, multi-layered passages, then Antenna’s more angular, ‘Metropolis’ film graphic based artwork by Brian Mitchell is indicative of the new album’s more direct but carefully constructed contemporary songs. For instance, there is an impressively flowing but understated guitar solo by David Lloyd in We are Connected, but whereas previously it may have been more lengthy and elaborate, on Antenna it is brief but consequently stands out all the more on a song filled with memorable hooks and straightforward lyrics.

The Gift are blessed with a combination of four songwriters in Mike Morton, David Lloyd, Gabriele Baldocci and Leroy James, who all bring something different to the table. Long Time Dead is a song which has appeared occasionally in The Gift’s live set in recent times and this ‘road testing’ has probably helped hone it into an outstanding song. Song writer Leroy James evokes a Wild West atmosphere with a Spaghetti Western type harmonica intro and then we are transported by atmospheric distorted wah wah guitar sounds. Evocatively played ensemble playing conveys a swagger befitting the feel of the song. Gabriele Baldocci even struts into the musical saloon with a dash of bar room piano. Morton carries the ‘carpe diem’ no regrets message of the song perfectly:

In contrast the following song Snowfall exemplifies the differing aspects that characterise The Gift. Over a delicate piano backing which brings to mind images of softly falling snow Morton touchingly sings about a lost relationship. Lyrically and melodically this is simply heart-breaking, and it is imbued with pure emotion and truth. Similarly, the instrumental piece Hand in Hand, the title of which echoes a Snowfall lyric, is also a thing of lovely subtlety, featuring guitarist Lloyd alongside bassist Stef Dickers, showing his versatility on acoustic guitar.

Snowfall and Hand in Hand bookend the far more angular piece Far Stranger, with a staccato, robotic feel appropriate for its subject matter of synthetic humans, with references to ‘Rachel and Roy’ (of the film ‘Bladerunner’) and ‘Pinocchio’. This song does not fully connect for this reviewer – it feels like a song which The Gift would have expanded upon in previous albums to convey the full story, but to me here it sounds like rather a lot of ideas and narrative squeezed in to a shorter piece. This is disappointing as it’s a fascinating theme, possibly fitting an earlier abandoned idea for the album title about being ‘Almost Human but not quite’, and the song and theme may have benefited from a more ambitious, expansive setting. On Far Stranger it is almost as if The Gift were caught between two stools in their transition from their previous ‘proggier’ style into a more succinct approach.

As if to underline that thought the extended piece Changeling is altogether more successful in conveying a narrative as it tells the story of the rise and fall of a politician corrupted by power in three distinct phases, which could easily be separate songs in themselves. This treatment gives the music and narrative time to develop and breath… but this is no extravagant, lush 70’s style ‘prog’ extravaganza. The sparse synth and programmed percussion of opening section A Saviour’s Shoes echoes 80’s era Japan (surely a good thing) with a finely judged vocal from Morton introducing a politician starting out with sincere intentions.  This fascinating opening descends in to much darker territory on the much more ‘rock’ oriented The Shadow Behind part with Neil Hayman in spectacular form on powerful and precise drumming alongside Dickers’ deft use of bass in the driving sections or more contemplative passages. Baldocci throws in a great twisting synth solo to convey the insidious effect ambition has upon the politician’s initial integrity. This outstanding piece then takes a definite ‘left turn’ in the closing Finest Hour section which is a pure glam rock stomp with Morton, acting out the fall of the politician in to total corruption, at his most dramatically camp on vocals and Lloyd and James on great form on guitars. The Gift premiered this section as a stand-alone song at the Fusion Festival in March and it went down a storm with the crowd, getting them to their feet. Curiously, it could be argued that this nearly ten minute piece demonstrates that The Gift remain  very much in the mainstream ‘Prog’ world, but trust me, you won’t think that when you hear it. It’s an interesting melding of different musical styles not normally associated with classic rock tropes, skilfully moulded in to a song cycle conveying the changes of the main character.

Perhaps as a ‘palate cleanser’ after such an extended and thematically dark piece The Gift follow it up with the optimistic rock/pop of Back to Eden, which rolls along brightly. This is in stark contrast to When you are old, with words by poet W.B Yeats. This slow and sombre piece of reminiscence and regret has hints of ‘Low’ era Bowie – some may love it’s melancholic atmosphere,  some may find it a rather depressing drone… but one has to wonder about it’s sequencing directly after the remarkably rocking Wild Roses.

The highlight of Antenna for this reviewer is definitely Wild Roses, which announces itself with ‘Art of Noise’ like synth effects and percussion before plunging straight in to pure Thin Lizzy territory. Leroy James and David Lloyd really rock out on the guitars and Dickers and Hayman thunder along brilliantly in the rhythm section, whilst Baldocci throws in occasional keyboard stabs and synth runs… but the real surprise is Mike Morton’s vocals – he really throws himself in to a powerful ‘Rock’ vocal, with more than a little resemblance to Phil Lynott! The Gift truly excel in a live setting and one can only imagine just how much they will rock the audiences when they pull that one out of the drawer.

Antenna concludes appropriately with Closer about relationships, which commences with bright jangling guitars over a cool bass line and Hayman in almost funky form on drums in the Where all Roads Divide section. However, for this reviewer curiously for an album which focuses so much on connection this is a song which does feel a little disconnected as that opening section quite suddenly jars in to the rocking instrumental Out of Reach section with synth and guitar soloing. It almost feels like The Gift felt compelled to pull out some ‘Prog Stops’ before the end of the album. As a section alone it sounds fine, but it did not flow naturally from the first part. Similarly, after a significant pause the emotional Closer finale does not flow on from the previous passage. Nevertheless, as a piece in itself Closer impressively builds and builds with delicately picked, almost bluegrass guitar, organ and then a lovely fluid piano. A lyrical soaring guitar solo elevates the piece to even greater heights as Morton proclaims:

If our journeys ever synchronize, Let’s be thankful for whatever, Brings our Universe together

On this album Closer feels ironically a little disjointed but as a live piece it may mature, and the excellent closing section will certainly stir the soul.

Well, as asked earlier, did The Gift succeed in communicating and connecting?

For this reviewer the answer is a qualified ‘Yes’.

There are some truly outstanding pieces on this album, but for me some songs did not quite hit the mark or fully connect. In essence some of the ‘plugs’ did not seem to quite fit some of the ‘plugs’. In truth The Gift were never a ‘full-on’ ornate ‘Prog’ band, and each album had more accessible, less musically ambitious and unashamedly ‘catchy’ pieces alongside their epic forays. However, the clear main direction was down well-trodden progressive rock paths, and with classic songs like The Willows they really did it so well. In contrast Antenna feels like a band trying to break out of what may have started to feel like a pigeon-holing musical straightjacket. There may also be a sense of liberation for the wide range of song writing talent within the band, which has added a wholly different and fascinating range of musical colours to their spectrum. The great qualities that marked out The Gift previously are still there in the DNA of their material but maybe inevitably this album does have the feel of a ‘Transition’ album. Sometimes in a transition process older ways of doing things do not always sit comfortably together with new paths. However, that is not a bad thing – transition means growth and ‘progression’ in the true sense of the word. The Gift should be commended for having had the balls to significantly change their sound – as Morton said in a recent interview that change may ‘piss some people off and disappoint’ but ‘that’s just the way it is…’ It will be fascinating to see where they go from here.

The hope is that their previous fans remember the core of what made The Gift worth following before and remain on board, whilst the undoubted high quality of the different range of largely more accessible songs on this album also justifiably attracts other new fans who like … well just rock music, whatever the label.

Antenna sends out a strong signal from The Gift – they do not stand still so leave your preconceptions at the door, open your minds and explore their changing world.