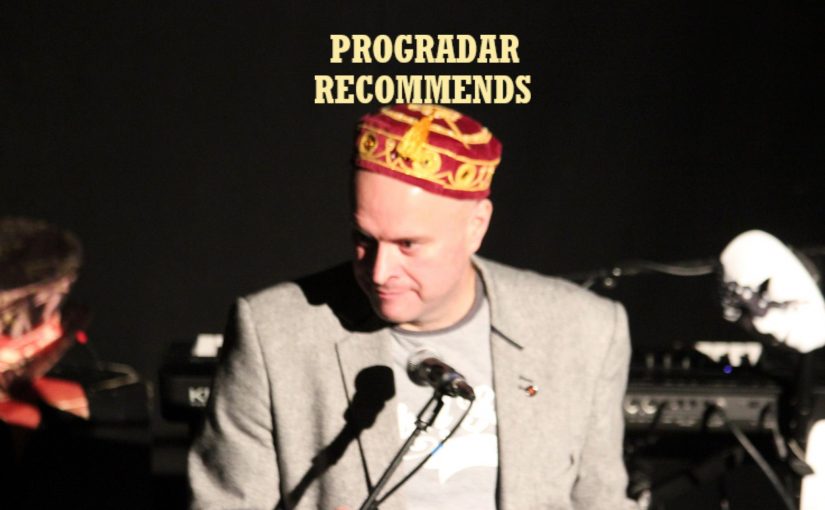 The long form review is becoming defunct in this day of instant gratification and bombardment of new musical exploits. Welcome to the new Progradar review section – ‘Progradar Recommends’ – where you’ll get more reviews (only with less words or some may say less twaddle!).

Starting this new feature will be Marco Ragni, M’Z, Siiilk and Wilson & Wakeman. “The album is about revolution, about searching for oneself, about metaphysical travel, about memories, about love and suffering. It talks about life, of how we live this Era. It try to push us in search of ourselves, finding the best of us after having passed from the worst of us. It’s a journey into my life. It is passion. It is a desire for redemption. It is a dream and a reality.”

Italian musician Marco has always been one for complicated and involving music using different influences and this new album is no different. Using eastern influences and a lot of woodwind you are treated to an ululating and evolving musical work that rewards concentration and repeated listening. Tracks like Promised Land and Keep Dreaming have a wistful and laid back feel that instantly lulls you into a calm and serene frame of mind.

Marco is joined on this journey by Peter Matuchniak (Lead guitar), Dave Newhouse (Woodwind) and Jeff Mack (Bass) as well as a host of renowned guests included Luca Zabbini and Ian Beabout. What he delivers is eight tracks that are a personal musical revelation from this highly accomplished artist. Listen to songs like Waiting on the Threshold and you will be captivated and drawn into this impressive escape from the mundane boredom of real life. Not your usual fare for this reviewer but I was intrigued by the album cover of Toulouse artist M’Z’s album ‘Prisme’ and so I decided to follow it up. It is presented as a fusion of rock, electro and jazz and, to be fair, it does exactly what is says on the tin.

To me, there’s just something exciting about the music and the structure of the tracks. Based around some pretty impressive guitar work the keyboards blend in with there elctro-pop vibe and the off-kilter feel is really of free-from jazz. To add even more polish and machination there are some highly energetic and powerful industrial electro vibes flying around all over the place with some punchy percussion.

To quote the artist:

“M is the guitar and Z is the machine, the idea is to also create a bridge between organic and electric/electronic music, a bridge between the code and its acceptance and the need to get out of the code.”

Don’t be put off by the description as, with repeated listens, this album really gets under your skin in a very positive manner. What you get is a thoroughly enjoyable 42 minutes of music with influences from all over the musical spectrum. A band new to me until I happened to talk to member Richard Pick earlier this year, Siiilk (someone’s finger stuck on the keyboard?) hail from France and produce wonderful, ethereal progressive rock hewn from the genre’s traditional style but with added Gallic flair and grace.

The band was formed in 2010 and have gone from strength to strength, blending superb, intricate guitar work with the lush keyboards and the wistful vocals of Robert and Catherine Pick. The subtle rhythm section is a revelation throughout and especially prevalent on the title track.

The PR stuff – “Siiilk revives its creative power and takes us to the imaginary realms of the mysteries of the soul. Through sensitive and intense sounds, their songs speak about landscapes of emotion and melancholy.”

Listening to ‘Endless Mystery’ is like falling onto the most comfortable bed in the world and letting the sublime, heavenly music wash over you, absolving you of all your earthly sins. Musical catharsis if I have ever heard it, one I suggest you go out and purchase forthwith! The second collaboration from this uber-talented duo is another exquisitely created and performed selection of songs where Damian Wilson once again gets to show us his more gentle side for this is another album founded on the big man’s ever impressive vocal and Wakeman Junior’s sublime tinkling ivories just add lashings of polish and verve.

What we have here is another dedication to the art of songwriting and the song. Tracks like opener The Last American Hero, Always The Lonely One and the title track are perfectly crafted jewels of the songwriting art and don’t need any enhancement, you just enjoy them for what they are. Adam even gets to show us his vocal skills on On This Battlefield and their emotive, touching delivery will move you.

“Writing songs with Damian is always a great experience as we tend to start from scratch and follow where the writing takes us. We’re so pleased with how this album has come together. Having Gary Stevenson on board to mix thealbum and add an extra ear from a production background has been nothing but positive. He also has a killer coffee machine.” – Adam Wakeman

After the wonderful ‘Weir Keeper’s Tale’ Damian and Adam have once again proved there are a force to be reckoned with and song writers without peer. Just listen to the nigh on perfect Better Than That with its gentle, piano led opening that slowly builds into a wonderfully up beat, almost raucous, jazz/rock outpouring that just makes you smile, life really doesn’t get much better than this!

So that’s it, the first edition of Progradar Recommends, let me know your thoughts please as I’m always looking to improve!