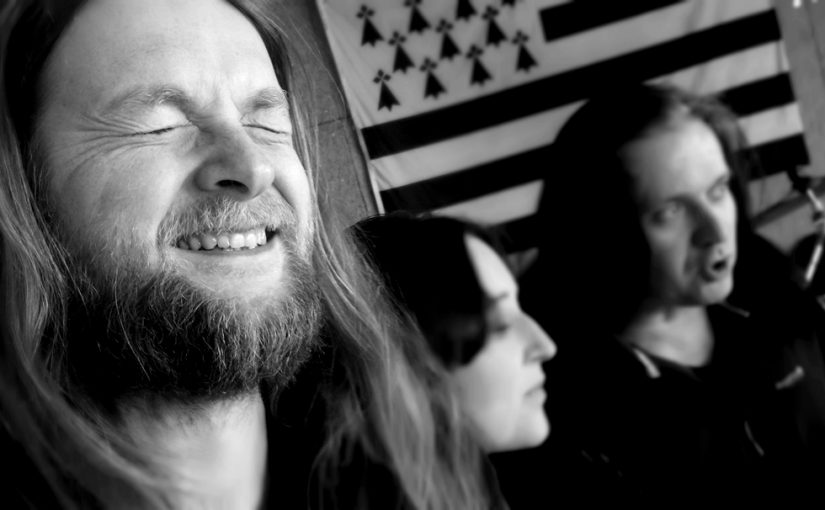 Another day, another new treat via cyber mail from the wallet emptier.

This time, I chose the album on the basis of the beautiful artwork.

See what I mean?

So, as per standard operating procedure, I magically converted the ones and zeros Mr WE sent me and stuck them to  shiny metallic disc, inserted said disc into a receptacle in a black box with a single glowing eye, pressed the arrow and…

It unfolded into a musical tapestry that beguiled and enchanted in equal measures.

What Children In Paradise sound like – All about Eve meet Panic Room. Bjork and Lisa Gerrard guesting with Opeth. Iona, Dead can Dance with guitars… Nightwish, Panic Room, that whole Symphonic Rock , female fronted Prog metal thing that’s a staple of the European Rock diet, but with a Celtic twist.

This is a recent area of Prog / Rock/ Metal that I’ve been dipping the metaphorical toe in.

There are the angelic voices and big guitar parts as seems to be the recipe for all of the above. But whereas Nightwish go operatic and Wagnerian on you, The Children take the folk / Celtic route. That’s where the charm of this album captured me. It’s haunting, mellow yet has bursts of Death metal growls and big guitar riffs. But it also has delicate keyboards, melody and a wide soundscape to get lost in

If I labelled albums by feel and vibe, then this would fit in with Arjen Luccasson’s “Ambeon” Devin Townsend’s “Ghost” album, Luna Rossa’s “Secret & Lies”, White Willow’s “Ignis Fatuus”, or the Nordic Giants albums.

It mixes elements of Prog ( lots of understated guitar , very Pink Floyd in places) , elements of folk , straight forward head shaking boogie ( Part 2 Cu Chulainn Is Mine has a middle passage that cries out for air guitar and good ol’ Headbangin’ !) added to the mix are a smatter of  Metal guitar and crashing drums. Live, this would sound magnificent, the orchestral parts sweeping you away. So, for the 5th listen I put on my nice shiny new headphones, and was transported into the land of the Children.

Alone opens with a big drum sound and a pulsing bass, choppy piano and possibly a harpsichord? The singer intones words pure of tone .As with most mp3 files, the sound is compressed to the disservice of the words, but the feel of the track is cinematic and the strings swirl, leading to a guitar layered piece with acoustic and electric parts jousting and combining to build the epic soundscape.

Lyrically, it sounds like a song of unrequited love, her waiting for him, offering to help him, telling him she waits for him, all she has to give is her love… She’s waiting for him to acknowledge and reciprocate…

I wait opens with voice and acoustic guitar, a plaintive song of longing, the protagonist’s lonely view echoed by the music with flutes or Celtic pipes making an appearance.

I’m Falling opens with the sound of either a tuba underwater or a very very angry wraith playing saxophone. Intriguing sample! Here we have a “cookie monster” growl, but it doesn’t intrude, on the contrary, it adds a sense of narrative to the piece, whether this voice is a force for good or evil in the story I’m not sure, but we seem to be at a tipping point with the middle section taking on a much heavier sound, big big riffs, thundering bass and a great flanged guitar solo.

The atmosphere invoked in the next track I Will Follow You is one of menace, the promise of following you more of a threat than a promise if you’ll forgive the pun. Battle is looming at least it feels that way with the snare drum echoing as the guitar crash through the mix. Far from being a song of devotion, the declaration of “I will Follow “slipping through the music and into the next piece.

Here it’s all about waiting, a sunny feel with the pure voice and melody slowly being enveloped by darker chords, the menace builds as the track grows, This is the core of the album, a trilogy with the Metal side coming through with a huge guitar sound, lush strings and orchestration conveying the power and majesty of a full throttle rock band.

The voice is deep in the mix, centre stage but overwhelmed by the thundering battle all around it. The narrator still waits for them to come back to her through the battle and in part 3 it appears that even dying won’t stop the reunion, with her now pleading to come find you, never leave you, and that his is your nightmare – not sure if it’s being lost, being found or something worse, but the music drives on, a big big sound very nice it is too. As you may have guessed, I like what is here.

I liked it so much that in the middle of writing this, I stopped, logged onto the Band’s website and ordered a bundle of both albums for 30 Euros…

I also then discovered the nationality of the band, and thought C’est La Vie, a second Gallic Prog band, C’est Tres Bon!

I digress, tracks 9 & 10  , In My Mind  and He’s Dying are where the Celtic vibe comes to the front – For those of a certain age, think  Davy Spillane goes metal, or for those of you younger than the Century, the sound is very much in the feel of Troy Donockley (Iona & Nightwish)  . Uilleann Pipes mixed with guitars and a full throttle rock band. A Glorious noise indeed.

And then it stops, a cliff hanger ending. the song drives towards the cliff, the music fades and the haunting final phrase of I see the Light echoes and fades.

It’s not Prog in the pastoral Genesis lineage, this is darker, a twisted hybrid of Celtic roots, Hard Rock and Prog that takes  you on a journey through the landscape that’s more EM Escher or Tim Burton.

If “Game Of Thrones” was a concept album, these would be the people to make it.