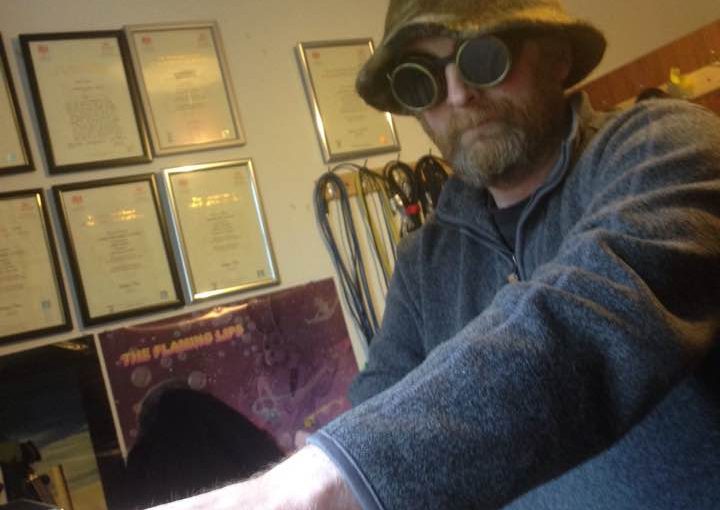 Many moons ago one of the bands I used to se on semi-regular basis playing at a rundown old Leisure Centre in Rotherham that had long seen better days (like pretty much of all of Rotherham at the time tbh) were Fula, a Buxton based prog rock band, and one of the founder members and driving forces behind the band was multi-instrumentalist and song writer Rob Gould, who would conduct proceedings from his behind his rack of keyboards on stage, as well as joining Brazilian band Ashtar on keyboards.

Since Fula have been on an indefinite hiatus, Rob has continued to plough his own furrow, a one man Peak District Psych composer, putting out ambient electronic albums, inspired by the caves in which he works, as well as more rock and song based audio albums like his last full length album the critically acclaimed ‘The Broken Road’.

Now he’s got two albums out for our delight, and they both are as different from each other as is possible to get, reflecting the many sides to Robs musical personalities.

I will start with the first one of the collection, the wonderfully titled ‘More Huru for Your Guru’, with it’s startling psychedelic cover (great hat Rob). It collects together 10 tracks of cover versions that Rob recorded between 2014 and 2017 for the Fruits de Mer label, and shows where Rob’s influences lie.

From two fantastic interpretations of David Bowie songs, a brilliantly haunting version of We Are the Dead, which takes the tension and power of the original and makes it more sinister in Robs skilful reworking, and the fantastic Sense of Doubt from Bowies “Heroes” album, where Rob shows his musical chops off in fine style. Kudos also has to go to Rob for having the balls to cover A Saucerful of Secrets, in it’s entirety, I have no idea whether Rob is crazy or inspired to take this Floyd song (that to many is one of those Marmite tracks) and reconfigure it and make a bloody good job of it, but either way, the only time I have seen anyone attempt this was again at that Rotherham leisure centre where a Floyd ’67-’69 only covers band called Ummagumma gave it a go.

I was also pleasantly surprised to hear on this album the cover version of The Purple Gang’s Granny Takes a Trip, I thought I was one of the only people in the world who have love for The Purple Gang, and Robs version is a perfect homage to the original whilst making it work in his own style.

With guests of the likes of Hawkwind’s Mr Dibs (who provides vocals on Robs trippy version of the Beatles’ Tomorrow never Knows) Fula’s Nigel Moss on bass on Saucerful amongst others, Rob has assembled an excellent ensemble that help him filter others songs and turn them into his own.

A covers album is always a difficult thing to try and perfect and here Rob manages the balancing act of staying true to the songs, whilst putting plenty of himself in there to stamp his personality on them and not just make a straight forward ‘boy-band’ retread. Extra points go, as always to anyone who covers Pink Floyd and doesn’t pick Comfortably Numb. This is a fantastic album, full of fun, great songs and shows Rob really enjoying himself doing something slightly different to what we’ve known him do before. ‘The Sad Robot Declared Peace with Himself’, is one of Rob’s companion piece albums, and this time it forms a companion to ‘The Broken Road’, containing, as it does, variations on themes of songs recorded for the album, and indeed music recorded at the time and not included, this follows previous companion albums like ‘Black Holes and Empty Spaces’ and ‘An Ocean in a Drop’.

It is a fantastic companion to ‘The Broken Road’, opening with an extended version of Daybreak in the Graveyard of the Sentient Robots, one of the standout tracks from that album, here, in all its’ glory, Rob gives it room to breathe and grow, its soundscapes immersive and complex, pulling you in and washing over you in waves of ambient electronica.

This is Rob back in his electronica territory, a whole world removed from being a Guru, this is him pulling soundscapes together, allowing his ambient and electronic ethos to run through the record. From Starmaker? The Broken Road revisited, which refines and returns to themes on the original album, to the longest track on here The Last Hurrah, which ebbs and flows between almost krautrock minimalism and stunning piano composition, this is where Tangerine Dream, Jean Michel Jarre and Michael Oldfield meet, on some windswept moor in the North of England.

The vast open spaces are evoked gloriously here, Rob is at his compositional finest, and like all the best soundscapes the music here has room to build and grow, the waves filling the room, and the underlying shimmering synths and recurring piano motifs layering and building to a shimmering climax, where the understated beauty of the unaccompanied piano work has a neo-classical edge to it, with tinges of melancholy and beauty fades into a pulsating, pounding electronica musical climax, all Radiophonic synths and minimalist beats, there is a certain thrill to be had as the repetition builds and changes to a driving insistent climax.

The sleeve notes state that these were all pieces completed around the time of ‘The Broken Road’ (which for my money is Rob’s finest solo album) between 2008 and 2013. All apart from The Fireclown, which was originally recorded back in 1990 and re-arranged here and has that almost dance edge to it, darker edgier musical stabs combined with half spoken lyrics, brings to my mind anyway Pulp circa ‘Separations’, and is a brilliant way to end this collection.

Instead of seeing this as a companion album, see this more as the ‘bonus disc’, the bits that fit in-between the spaces, and the songs that didn’t quite get away.

As such it works perfectly, and these two vastly different but both suitably interesting albums, that really show Rob Gould’s multi-faceted talents, and remind us (if we needed reminding) of how consistent and interesting a musician he is. Highly recommended.