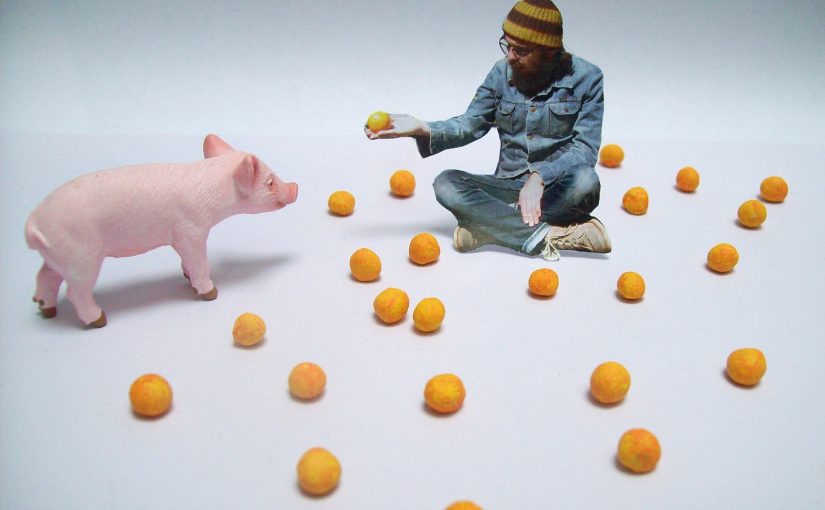 Let’s talk about eclectic for a moment, shall we?

I have tastes that vary from Abba to Zappa and all points in between, drifting off at a tangent (via The Tangent) taking in psych, rock of the Yes/King Crimson/VdGG variety plus many other gleefully eclectic sounds. That’s not to mention electronica, ambient, classical and many other genres, so when I come across a renaissance man like Jarrod Gosling who bestrides genres and, indeed, disciplines like a multi-media, multi-talented master of all he surveys then, of course, my curiosity is piqued.

I first encountered Jarrod’s music from I, Monster when they blitzed the charts with their single Daydream in Blue, and the mix of pop and rock, darkness and light and sophisticated sounds weren’t just pushing pop’s boundaries, they were redrawing them. Then there was the more acoustic side of Jarrod’s style – The Skywatchers collaboration, followed by stints with Henry Fool. As well as working on the artwork for Tim Bowness’ solo career, Jarrod also found time to form the absolutely brilliant Cobalt Chapel where his gothic folk vision is matched by the vocals of Cecelia Fage (well known for her work with Matt Berry and The Maypoles) not only that but Jarrod announced himself on the new alternative scene back in 2013 with his triumphant Regal Worm debut album ‘Use and Ornament’, followed, fairly closely, by ‘Neither Use not Ornament’.

Now Regal Worm return with the cheekily titled ‘Pig Views’ (named after Jarrod’s studio, which overlooks one of Sheffield’s football grounds – as a fellow Yorkshireman I won’t go into which one, as it might cause an online ruckus and we don’t want that), did I mention that Jarrod was also a Yorkshireman? A true Sheffield original like Henderson’s relish, and as vital an ingredient to any musical dish as Hendos is to cookery.

I’ll stop with the Hendos and talk about the music, I was eagerly awaiting this album, as the last two Regal Worm albums have crossed prog with psych with Jarrod’s inimitable style and charm and have brightened up every record collection they have joined.

This new addition to the family, with it’s stunning artwork and also available as a pink double vinyl set, looks very smart indeed. Artwork, of course, is by the man himself, while he covers all bases musically with guests including Mick Somerset-Ward on alto, tenor and baritone saxophones and flute, Peter Rophone on voice and acoustic guitar, Louis Atkinson on Alto and tenor saxophones, Emily Ireland, Heidi Kilpelainen and Paul Putner on voice and Graham McElearney on harp. Amongst Jarrod’s musical arsenal are items like Mellotron, Hammond Organ, Rickenbacker bass, Mandolin, Lap steel guitar percussion and many others. This mix of instrumentation, particularly the sax and flute, give this a very English sound, reminiscent of Canterbury scene bands. Throwing in Jarrod’s love of jazz and psych, and his rock sensibilities then all the work combines to create a unique musical delight.

Rose, Rubus, Smilax, Vulkan is a brilliantly arresting opening, with it’s chant style chorus, and the way it builds and segues nicely into Revealed as a True Future Tyrant is sublime and shows Jarrod’s innate musical sensibilities and style.

He also has a knack for a title, and the wonderfully named Rose Parkington, They Would Not Let You Leave is a wonderfully keyboard driven piece where the pulsating and thundering keyboard and the duelling sax propel what is one of the most joyful sounds I have heard on record for a long time. You hear the other side to Jarrod on the wonderfully atmospheric Jag Vet, that falls under the heading of a section titled Under den Svenska Vintern (During the Swedish Winter) this suite of songs demonstrates Jarrod’s versatility as the acoustic haunting Jag Vet leads into the 3 part The Dreaded Lurg (like I said, Jarrod has a knack of wonderful titles) where his piano and keyboard playing slowly builds up the song, adding layers of sound and, if you’re looking at best multi-instrumentalist for any awards that happen to be going, I reckon Jarrod has to be in with a shot. His use of the flute as a melodic weapon to drive the piece on is inspired, and it’s those touches of flute and sax, bursts of synths and the juxtaposition of sounds that recall more obscure 70’s Radiophonic Workshop soundtracks or the films of Tigon.

This isn’t copying though, this is weaving disparate and eclectic influences into a new musical whole, pulling random strands together to create something new and unique with little hints and nods to the musical journey Jarrod has been on and wants to take you on. As a musician Jarrod has always done something different and interesting with every release, and this is no different, whilst there are hints of the styles that dominate Cobalt Chapel and I, Monster, Regal Worm is its own different musical entity, one that draws you in with some of the most innovative and eclectic sounds I have heard on record all year. With the wonderful chorus of the almost hymnal and reverent Huge Machine, You Are So Heavy and the albums wonderfully eclectic style and sound, Regal Worm sits at the forefront of the new English alternative scene. If your record collection has room for a Schnauser or a Knifeworld in it and not a Regal Worm then you need to rectify that forthwith.

This is one of the most exciting and original albums I have heard all year and I implore you, if you enjoy well crafted exciting, innovative and eclectic musical journeys then ‘Pig Views’ is the album you need in your life.

Album of the year so far? I reckon so.

Order the album on CD or Vinyl at bandcamp here