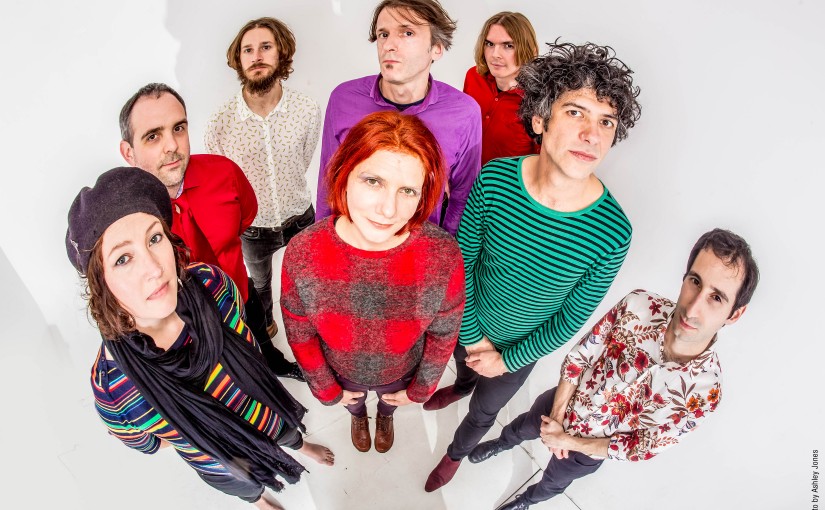 I was unfamiliar with Knifeworld when the advance copy of ‘Bottled Out Of Eden’ arrived in my inbox and, following my usual practice, I decided to just listen to the album prior to researching anything about the band. Going in without any preconceptions is something that’s not always easy to accomplish these days since every release is plastered across social media months in advance. In the case of Knifeworld, a band that joyously throws in elements from a myriad of musical styles it was exactly the correct approach to take. The element of surprise runs throughout ‘Bottled Out Of Eden’.

Opening track High Aflame was an obvious choice for a single. The bouncy, effervescent arrangement is so addictive that it’s practically narcotic. The song begins in a mysterious fashion, a vaguely eastern-tinged drone that vocalist/guitarist Kavus Torabi uses as a pedal point to lay his vocal line over. It creates dramatic tension and heightens the anticipation of the full band entrance.

Knifeworld is a rarity in that they employ an octet format with two altos and a baritone sax creating a “little big band” vibe. This lineup allows them to bring in instrumental colorations that you don’t often hear in modern Prog . The main section of High Aflame is introduced by the horns playing a repeated figure as the band slowly swells in behind them. The groove is rock solid and creates a sense of brisk forward motion; the kind of song you want to hear blasting from the car stereo. Another unique aspect of the arrangement is the dual-lead vocals of Kavus and Melanie Woods, they employ dissonance and a harmonic tension which meld together nicely with the horn charts creating a sense that the band is actually larger than it is. Knifeworld is frequently described as psychedelic and, while there is most definitely an element of that in both arrangement and some of the instrumental choices, I think labeling them with that tag underestimates the breadth of influences at play here.

The Germ Inside demonstrates how effortlessly they balance these various elements. The opening piano introduction, and the knotty riff section that follow, are straight out of 70s progressive rock but then the verse section is a bright, swinging 4/4 with a vocal line that is reminiscent of 80s British pop. Just about the time you feel comfortable with where the arrangement is headed it veers off into a bridge that employs borderline atonal vocal harmonies. This dissonance is then transferred to the horn section for the restatement of the opening theme and the ride-out. Not an easy balance to strike, especially in a tight, under 5-minute arrangement.

My favorite track on the album is the impressively complex I Am Lost.  It eschews the relatively concise running time of the other tracks and allows the band to stretch out a little more.  Again the push & pull dynamic between the overt pop-leanings and the underlying experimental nature of the arrangement really enriches the overall flavor.   There is also a fantastic little funky riff that comes in during the outro and I could easily see the band being able to stretch this section out in live performance.

The horn section gets a brief time in the spotlight on Vision Of The Bent Path, a sadly all-too-brief introduction to the primarily instrumental I Must Set Fire To Your Portrait. This is a wonderfully dense, dark and rocking track that really shows off the power this octet can conjure. I’m especially fond of how the baritone sax is layered in with the heavy guitar riff in the outro section. While the overall impression of ‘Bottled Out Of Eden’ is relatively bright and sunny there is a dark undercurrent that runs throughout the album, an air of sadness and melancholy.  In the press release Kavus describes the album as “…a celebration of this all too fleeting life, as it is a reflection on death and its impact on those left behind in its wake”. I believe these songs perfectly attain that goal, as humans we’re all too familiar with the need to “laugh to keep from crying”. One of the most impressive examples of this duality is album-closer Feel The Sorcery, the joyous nature of the arrangement contrasts effectively with the sense of grief expressed in the lyrics and that mood seems to carry on even after the song has concluded.

Other highlights are the plaintive acoustic ballad Foul Temple (gorgeous horn chart with bassoon and clarinet), the ominous Lowered Into Necromancy that features a vaguely Zeppelin-esque acoustic guitar riff and the beautifully melancholic A Dream About A Dream.

I have a couple very minor caveats.  I would love to hear the horns get a chance to step forward a little more and maybe take some solos, they are beautifully employed on the album but being a major jazz fan I also kept hoping to hear them really cut loose. Also, while the production is a definite step forward from the prior album ‘The Unraveling’ it’s still a little claustrophobic sounding for my taste, a little boxy. As detailed and expansive as the arrangements are, I think a larger soundstage would have complemented them even further.

As a whole ‘Bottled Out Of Eden’ is an effective and eclectic experience. It’s not going to be an album for everyone as I think some of the more adventurous harmonic elements might be challenging for some listeners. But for those attuned to the more experimental and avant-garde it’s a pop album of rare substance.

Pre-order ‘Bottled Out Of Eden from Inside Out