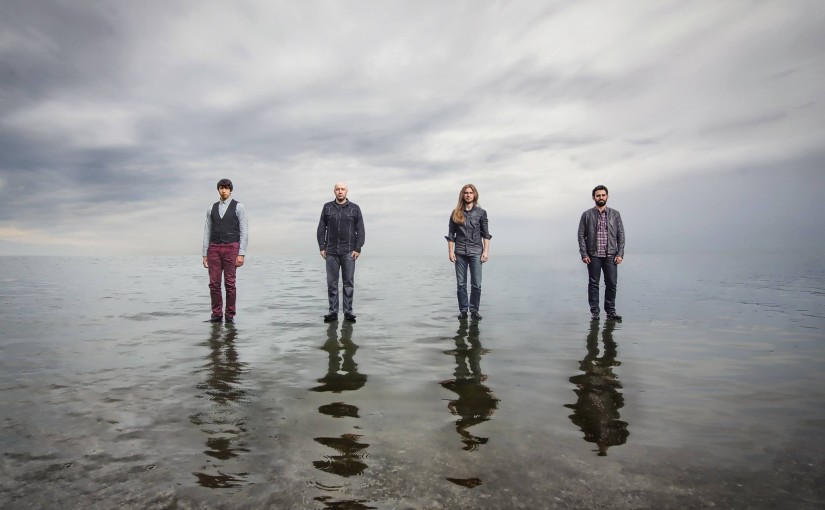 If they gave out awards for most ambitious debut albums of the year then Earthside would be the clear winner for 2015. ‘A Dream In Static’, the audacious debut of this Connecticut prog metal quartet was recorded over a two and a half year period, on three different continents.

To ensure they attained the production sound they wanted they travelled to Sweden and worked with renowned engineers Jens Bogren (Opeth, Katatonia)  and David Castillo (Opeth, Bloodbath). Another frequent Opeth collaborator, artist Travis Smith was brought in to design the artwork. The passion evident in the overall project carries over into the music.

‘A Dream In Static’ is evenly split between instrumental cuts and songs that feature the guest vocalists. The risk of featuring multiple vocalists on any project is sometimes the identity can get lost from track to track, but Earthside (mostly) avoids this pitfall with a unified compositional focus that perfectly ties the pieces together into a whole.

The opening instrumental piece The Closest I’ve Come begins the album by introducing us to the character of the core group before the other layers are applied. Their sound is striking; very modern, muscular, melodic and intricately arranged. A lovely looped guitar melody cascades over a synth backing and a driving beat before the rest of band enters. Unlike many prog metal bands the focus here is not on pyrotechnics, it’s creating a mood, an experience. The arrangement continues to build with each section, dynamics always carefully applied; quiet and then soaring, delicate and then aggressive, tension and release. After a lovely guitar solo the song quiets down into a soundscape, synth sounds and real percussion swirling together in the aether before crushing Meshuggah-style guitar chords lead back into the arrangement. It’s dramatic music to be sure, but they’re natural dramatics, not the oft-contrived variety.

The group describes their music as “Cinematic Rock” and nowhere is this more evident than on Entering The Light. The song features guest soloist Max ZT on hammer dulcimer and he creates a lovely wash of sound that intermingles perfectly with the full orchestra. The contribution to this piece by the band is mostly confined to the mid-section bridge. It definitely has a soundtrack quality to it, if I close my eyes while listening I picture low flying helicopter shots of a frozen tundra or some such…exactly the type of reaction I’m sure the band was hoping for.

The most impressive composition on the album is the mid-album centerpiece Skyline. This intricate instrumental has a breathtaking arrangement, the complex layering of piano, synth, 8-string rhythm guitar and soaring melodic lead guitar in the opening sections create a massive enveloping sound. This is contrasted beautifully by a stark bridge featuring just piano and drums, before slowly building into the epic conclusion.

Of the vocal tracks on the album my favorite is the driving title track A Dream In Static featuring Daniel Tompkins from Tesseract. The dramatic balance of melodic and aggressive from the instrumental compositions carry over to the vocal arrangements and the impressive vocal range of Tompkins is used to great effect. There is a Katatonia vibe to this song that also appears in other places on the album.

The lead single from the album is actually the only track that doesn’t really work for me. Mob Mentality is more akin to the symphonic metal style and I have to be honest and admit that isn’t really my cup o’ tea usually. The arrangement of the orchestra and the band is very nicely done and has a huge cohesive sound.  Guest vocalist Lajon Witherspoon’s (Sevendust) R&B-flavored vocals also provide an interesting contrast as usually these types of arrangements go for the operatic approach. But as a whole the song just doesn’t quite gel in my opinion and it also goes on far too long with too many repetitions of the chorus.  The band is actually underused here, this song is practically screaming out for an instrumental mid-section but it never materializes. While a nice attempt, this is the one track that feels out of place with the rest of the album.

The rest of the album fares better with the aggressive instrumental The Ungrounding and the album closing epic Contemplation Of The Beautiful featuring Eric Zirlinger (Face The King) being my other favorites.

Color me impressed. Despite my love of progressive rock and my love of good heavy metal I can’t say I’m usually that much of a Prog Metal fan. There are a few exceptions, but mostly the combination just doesn’t quite work for me.  I’m very glad to have found another exception.

Earthside has crafted an impressive work with ‘A Dream In Static’, one that could prove difficult to surpass with their sophomore effort.  But I’m laying odds they can top it.

Buy the CD with complimentary download direct from the band