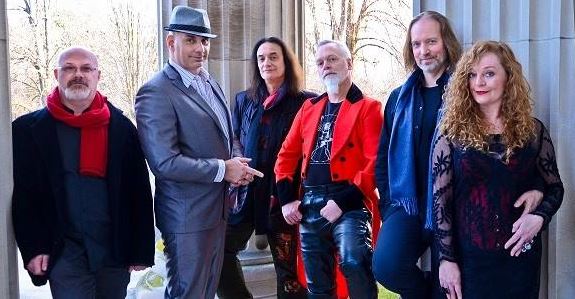 That’s a pretty impressive opening gambit from the press blurb for Circuline’s latest release ‘Counterpoint’ and the next line nearly made me crack-up!

No, you didn’t misread that, it said SEVEN guest guitarists!! Well, to me that could just turn out to be overkill or the musical equivalent of herding cats but, you never know!

So, for the sake of completion, here are those guests…..

So, would these additional musicians add to the depth of talent the band already has or would they prove that too many cooks can actually spoil the broth? Read on and find out…… The album opens with a a powerful statement in New Day, a track that builds on a rolling drum beat and off-kilter keyboards to almost drive you crazy. Coruscating guitars blaze across the landscape, it is like some crazy sci-fi soundtrack or diabolical mind weapon that seems to be forcing you into submission. Dynamic guitars dominate the soundscape, interspersing with the keyboards like some ELP-esque monster. It’s forceful and influential Prog with a vivid outlook and a highly impressive beginning to what is awaiting us.

Like a one-two knockout, Who I Am explodes into the ring on the back of staccato piano opening, insistent and demanding, before a huge crunching riff literally knocks you over. Man, I’m getting hooked on this already! A huge wave of sound engulfs you with its magnificence and you just hang on for the ride. A break in the squall sees that piano note return, gentler and questing, along with the benign waves of the cymbals, calming your heartbeat. The vocals begin and they are theatrical to the max, superb interplay between Billy Spillane and Natalie Brown giving the music an extra nuance. That monstrous riff is what drives this catchy song on though, brooking no resistance. I love the laid back, chilled sections that occasionally grace your aural sensors, they give you a sweet respite from the upsurging music that hits you square on the jaw but always leaves you smiling. To be honest, it’s one of the best tracks I’ve heard this year and I could almost recommend the album just on the strength of this one song.

Did you expect a pause for breath? Well you should have known better. Another drama laden introduction building to something profound leads in the mysteriously named Forbidden Planet, keyboards swirling all around , apprehensive and almost sinister, are setting the scene. The vocals begin, quite emotive and descriptive, adding more shine to the proceedings. I’m almost reminded of the latest Dream Theater album, but in a good way. The thumping chorus will have you singing your lungs out, it is pure musical theatre of the best variety. Artful and dramatic, the guitar solo that fires out is superb and just adds to the feel that you are in an actual theatre, enjoying a musical show. The excellent bass-lead, guitar heavy, run out of the song adds even more of that drama and leaves you with a knowing smile on your face. Hollow is a more circumspect song, the introduction washes over you before a passionate vocal and guitar fire up and lead the way. Heartfelt and moving, even a bit darker in places, there is a more progressive than cinematic feel to the track as it gets into its stride. To my ears there a definite hints of Glass Hammer and even Dream Theater in the intricate keyboard playing and the way the song seems to be built in layers, the instrumental sections are really convoluted and complex. It’s almost as if the musicians decided that they just wanted to have a prog-infused jam session, and a mightily enjoyable one at that! Once normality is restored we get more of the dominating vocals, leaving an ominous overtone in places. There is something for everyone in the song, baroque progressive moments, touches of Prog-Metal and, well, just excellent songwriting and musicianship.

One of the shorter tracks on offer, Erosion is an instrumental that opens full of suspense, the cinematic overtones are there in spades, this could be the soundtrack to a sci-fi film with its haunting atmosphere and heavy doses of tension. It is quite disturbing in fact and I found myself on edge all the way through.

I love the bassline that opens Nautilus with its jazz-funk feel, there’s a really upbeat atmosphere to the song, the distinct guitar note and vigorous drumbeat adding to that high energy aura. The vocals, once again, hit the spot and give the song its own identity. At first, you aren’t sure whether there are too many influences running through the music but, by the time you’re really involved in the album, it is a distinctive sound unique to Circuline. I feel the keyboards generally take the lead and the rest of instruments follow and it works very well indeed. Another clever integration of the complexities of progressive rock infused with some powerful rock elements to give that cinematic feel, the guitar solo is another sterling effort.

The mood quietens for the delightful Stay which has more akin to a piano lounge track than your usual progressive fare but I really like it. Laid back, funky and with chunks of jazz dripping all over it, Natalie’s vocals are the centre-point of this sepia tinged song. Thoughtful and contemplative, it really does give you a complete feeling of chilled out security. The guitar playing is fluid, serene and composed, it is a song for a wonderful, warm summers day when you haven’t got a care in the world.

S.O.A is just over one minute of quite unsettling mind warfare if you ask me, it is really quite sinister……

That mood carries on into the opening of Inception with its 80’s synth overtones that seem to want to invade your mind. Again, another impressive cinematic soundscape that draws pictures deep in your psyche, music that challenges the mind as well as satiating the soul. It is almost transfixing in the way it draws you into its embrace to leave you feeling oddly at home. Then the vocals start and your attention changes, the voices, lilting in their delivery, have a hypnotic edge and work in concert with the inventive music to give a superlative listening experience, a musical journey that, once traveled, you are happy to return to time after time. The closing out of the song is particularly brilliant.

So, onto the final instalment in this cinematic treasure, Summit has all the clever subtleties of what has gone before, a quite enigmatic opening before the song begins its final traverse of your musical landscape. Sultry bass lines and drumming add a great backdrop to the exemplary harmonised vocals, like the perfect recipe from some masterchefs of the musical world. Nothing is ever too simple with these guys though, we have some involving musical sections to add substance to the lush vocals laid before us. Grin inducing guitar solos and keyboard runs abound and you are just left floating in a world of musical well-being. The potent chorus adds strength to the beauty of the rest of the song, you are left wanting for nothing with this band’s repertoire and it is shown to the full on this finishing track, some more prog wizardry to add to the dramatic and cinematic feel. I have to admit, by the end of this song and album, I am left feeling that I have been spoiled by the music and talent on offer.

So, do too many guitarists leave you herding cats or give extra shine to an already impressive collection of musicians? Well, if you’ve read what goes before this conclusion you’ll know that they enhance things immensely. A deep well of musical wonderment is laid before you to drink from at will, take a small sip and come back for more (as you will) or take it all in one gulp to be completely indulged. Whichever way, you’re going to love it!

Buy ‘Counterpoint’ direct from the band