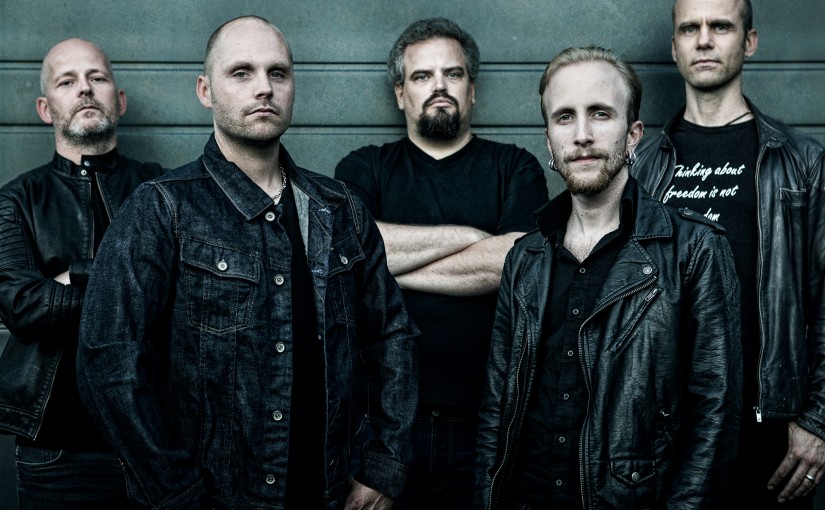 What, to you, is the heartbeat of a good band? What, if it was ripped out, would make them a pale shadow of what came before? If you replace the lead guitarist would that really make a huge difference? I don’t know. But, if you bring in a new lead singer, that can give you a totally different ambience.

I mean, look at bands like Van Halen and Marillion, when Dave Lee Roth and Fish, respectively, departed, you were left with something that was similar yet never the same again.

I bring this up because I recently received the latest promo from Norwegian progressive-metal act MINDTECH and they have a new vocalist. Now, I loved their debut album which was heavy and intense and yet had an intrinsic intelligence at its core, would this change of personel be for the better or, hopefully not, the worse? MINDTECH was formed in 2007 by guitar player and songwriter Thor-Axel Eriksen. He recruited drummer Ole Devold, bass player Øystein Moe and
keyboard player Lasse Finbråten, a 3 track demo was released (under the moniker “Beyond Flames”).

2008 marked the live debut of the band, now called MINDTECH, with the addition of guitar player Thomas Hansvoll. The band started to work on their debut album, a process that seemed to be taking a long time, however, with the introduction of guitarist Marius Belseth in 2012, the spark was suddenly
back, and they started the work on finishing the album ‘Elements of Warfare’.

October 11th 2013 was the debut album’s release date, but their concert at the release party marked the end of singer Aslak Johnsen’s era in the band. He was only supposed to lay down vocals on demo versions of the songs, but ended up doing the full album.

Via Withem’s guitar player Øyvind V.Larsen, they got in touch with Mathias Molund Indergård, a great singer with a versatile musical background. He fit the band perfectly, the work on finishing songs for an EP started immediately, and the first single, Lost In A Dream, was released digitally on September 1st, 2015 and single no 2; Black Heart, was released January 22nd, 2016. The first, and title, track Edge of the World opens with an ominous synthesiser and guitar introduction, gradually building the tension before it opens into a huge riff, reminiscent of the first album. All powerful and in your face, there follows a short staccato burst of guitar before we hit the accelerator and set off. When the vocals first enter, there is more than a hint of symphonic metal about them, Mathias has a great rock voice, more cultured than Aslak’s, which had definitive edgier delivery. He has nuances of heartfelt remorse in the slow parts and a thunderous intonation when the fuse is lit. Throw in a fiery guitar solo and you have a great stat to the E.P. There’s nothing new here but it is done with a stylish edge.

Black Heart, the second single release, begins with an immediate crunching riff and restless synth note. The vocals kick in with Mathias hitting some very high notes indeed, his voice is definitely more melodic in its delivery, especially on the really polished chorus. The band seem to have taken a conscious decision to move away from the industrial feel of the first album, yes it is progressive-metal in nature but there is a much more cultured feel to everything from the keyboards to the rather impressive drumming. The excellent guitar playing of Eriksen and Belseth is another highlight with a superb solo delivered towards the end of this track. However it’s the really expressive vocals of Mathias Molund Indergård that have lifted everything to another level.

A really gentle guitar and ethereal keyboard tone open up The Quest. Here Mathias gets to show us the softer side of his voice and personality, his vocal delivery is soft and cultured before the guitars liberate another dynamic riff to accompany a more forceful vocal expression. There seems to be a darker side to the track as it continues with the guitar becoming more abrasive, this is lifted by the elegant chorus. A really sophisticated song with a depth of meaning that is hidden at first.

Lost In A Dream was the first single, released digitally and it has a more harder feel right from the start, twin duelling guitars and frenzied drumming giving it an urgent feel. This track is pure progressive metal and the vocals follow that genre-given lead, I hear touches of early James LaBrie (Dream Theater) and Michael Eriksen (Circus Maximus) to them. The guitars of Thor-Axel and Marius are finally let of the leash on this impressive track with some incredibly fiery licks and a magnificent solo really highlighting their undoubted talents. Where the first three tracks had a slight feeling of restraint to them, Lost In A Dream pulls no punches at all.

The final track on this oh-too short E.P. is Misery ( that’s the title, not my opinion!) which opens with another fine riff which underpins some rather superior guitar work and notable drumming, as fine an intro to a prog/symphonic metal track as you are likely to hear this year. Mathias’ voice takes in an earnest, almost forlorn timbre and lays the serious foundations that the song is built on. The progressive riffing mirrors the sombre feel that runs throughout and there are some more admirable twin-guitar solos, licks and heavy riffage from the axe-men. The close out to the track is pure progressive-metal exhibitionism but, who cares when it’s this good, there’s even a Rush-a-like guitar part that just made me smile.

So, what can we glean from this new vocalist-inspired MINDTECH? Well, one thing for certain is I enjoyed every second of this prog-metal romp and wished it had been longer. Mathias Molund Indergård has added another dimension to this already exciting band and I’m impatient to hear more. If you like your progressive-metal with a symphonic touch then you’ll love this!

Buy Edge of the World from iTunes