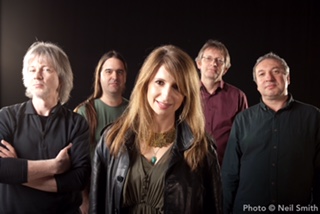 A challenge from the wallet emptier…

I’m to listen to a new release on Naughty Pachyderm’s imprint, write a review and post it off all before David “The Progmeister” Elliot realises I’ve been listening through the keyhole of his prog vault.

So I sneaked into Elephant HQ, snuck under the wallet emptier’s detection wet string and tin can alarm system, negotiated Tom Slatter’s tentacle armour, carelessly strewn about the floor. Through a door located beneath the might piles of CD’s awaiting re-homing, I step into a bright and sunny place, the Far Meadows.

And that folks is where our story really begins.

The press release for The Far Meadow’s ‘Given The Impossible’ helpfully tells me that the members of this band were in other bands before. The band claim to enjoy leek knotting, Icicle archery and banana pushing. I may have snatched a look at the unfinished article as banana pushing? Seems a bit farfetched to this progboy, but I’m here to listen to the noise they make, not comment on what they do when not making noise.

So , The Far Meadow – First impressions are that it’s a refined, gentle place where musicians meet to construct songs with verses and choruses, middles, beginnings and ends. They construct them in the traditional manner, with some lovely keyboard, flute and guitar flourishes between them.

The singer has a very pure soprano voice, all crystal and fine wine, whereas I’m more partial to an earthy red wine in an odd glass voice. But this voice is all pure elven tones,  a departure from my preferred dwarvish blues gravel throat singers that have lived a full life . If you play the “sound like” game, then it’s more Juliette Reagan than Marianne Faithfull, more Christina Booth than Beth Hart. But it works.

Marguerita Alexandrou has a nice tone, a clear and unfaltering delivery and an interesting quality to her inflection that gives extra character to the material. The high notes are dealt with in her stride without any of that ghastly X factor wobble that seems to be used to stretch every utterance into a poly syllabic outburst. Here we have a singer in tune, on the beat and singing that compliments the band behind her. That’s another good thing. The album sounds like the entire band were involved with the final mix.

As the Elephant team were  kind enough to supply lyrics, I can finally do a proper grown up review and tell you that on this album, you learn about Wedding day nerves, Cracking the Enigma code, the facile nature of ambition, overcoming fear, a warning that technology cannot replace real engineers and more. OR I’ve misread the whole pile and it is actually a concept album about pan dimensional celestial flying nymphs… again.

So, modern themes for a modern Prog band to sing about. And they do sing. And they play. And they harmonise. And put in excellent little instrumental flourishes.

The songs sound like they are fully formed, not a collection of ideas and clever twiddly bits bolted together. As with all bands, the tipping point for me is would I enjoy them live?

The answer to this is YES.

I want to hear the dynamic shift and synth solo in the middle of Dinosaurs performed through a concert P.A. The Guitar solo after it will be a foot on monitor moment, adulation from the crowd driving the guitarist on through the solo. The keyboard and guitar parts are crying out for dry ice, big lights and a frenzied crowd…

Himalaya Flashmob cracks on , a rocky little ensemble after the Prog work out in Dinosaurs.

Lots of angular guitar riffs and angst filled vocals to start off, this is “The Epic” on the CD, a treatise on the vapid rewards of overachievement, A thoroughly modern disease, the overachiever’s bucket list route to enlightenment.

The track blasts off into It Bites land with some more great keyboard: guitar interplay before breaking through the clouds to a peaceful single guitar then instruments and ethereal voices paint the picture of the climbing of a mountain.

The protagonist seeks fulfilment through overachievement, joins the queue for the top, gets a wake up shot as finally they realise just how small they are, ego or no ego.

Do they learn from this? See the error of their ways and return a better person? The story is left at the point of enlightenment for us to decide. Not a cliff hanger, although, stuck at the top of a mountain struck by a sense of your own insignificance could be said to be the ultimate cliff hanger! There is some great instrumental prowess here, but no sense of grandstanding. The music flows around you as you drift off in an enlightened cloud of Prog bliss. The final track, The Seamless Shirt starts all rock guitar and thundering drums, with a Zappa / Miles Davis Electric band vibe, the drumming is metallic rather than metal, then suddenly switches to a folk staple, not the first time this particular song has been shoehorned into an alien landscape .

The Stone Roses co-opted it on their debut album. Some pair of American folk singers adopted it too, back in the pre- streaming era.

Scarborough Fair gets dragged into the middle of this song, twisted to fit the narrative, we then flip back to the funky percussive tale of broken trust and dashed hope. a relationship in the making and unmaking of the shirt.

Again we get a guitar solo, this time , as I mentioned Frank, this references Steve Vai, with a lovely lyrical solo, the final instrumental section is a beautiful piano and drum piece, very Herbie Hancock in tone that stretches and bridges to the final verse.

Then, all too soon it’s over. 45 minutes of musical delights that is more progressive, more dextrous and more interesting than I deserved. Another fine wallet emptying collection for the ever expanding Bad Elephant stable.  I really need to negotiate a discount as this reviewing is getting expensive.

I know  I am lucky to get he pre-release mp3, but nothing beats the delight of owning the actual finished product. Be it vinyl or CD, it’s a thing of solidity in a fluid world.

‘Given The Impossible’ is that too, and like a good curry , it matures with time. I’ve listened constantly now for 4 or 5 plays. There are nuances and passages of beauty that my ears are enjoying navigating along. The more I listen the more it connects in my head to It Bites and Francis Dunnery’s lyrical guitar parts .

The naughty pachyderm has done it again, an excellent release.

Buy ‘Given The Impossible’ from Bad Elephant Music on bandcamp