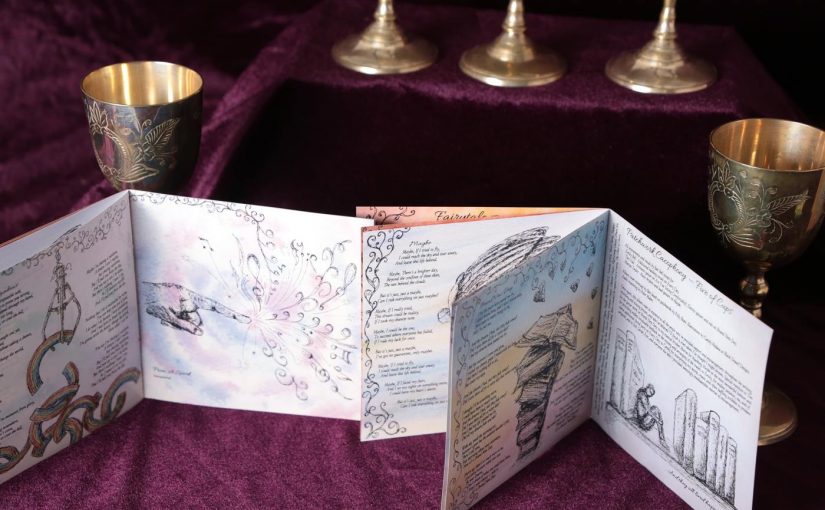 There’s been a lot of discussion recently about a loss of ‘value’ to music, in the sense that people seem to think that they should be able to listen to it for free, either via streaming services such as Spotify and Apple Music or by illegally downloading it from the plethora of music sharing websites that haunt the internet.

What hasn’t helped is the fact that now virtually anybody can make an album in their bedroom with a laptop and, unfortunately, virtually all these so called ‘records’ are of very poor quality. To be fair, I’d be a bit hacked off if I’d spent £10 on a piece of music that sounded like caterwauling cats singing over somebody’s guitar lessons but the majority of music is still made over a lengthy period of time by artists who put their heart and soul (plus a not unreasonable sum of money) into creating these musical gems.

To have that devalued by the marketplace as it is now must be heartbreaking, especially when you are a multi-instrumentalist who actually plays virtually all the instruments on a new release, as well as writing all the songs and producing and engineering their works of art. A message came into Progradar from Ben Bell, the multi-instrumentalist behind Patchwork Cacophony, asking if I’d take a listen to his latest release ‘Five of Cups’. I duly did and was intrigued to find out more…

Ben first came to prominence as the keyboard player, co-composer and producer on Fusion 2 Orchestra‘s acclaimed 2013 album ‘Casting Shadows’. When I started waxing lyrical about his new release on social media, it also came to light that he is the new keyboard player for my favourite cult prog-rock outfit Gandalf’s Fist and this was pointed out to me by my friend (and Fist’s drummer) Stefan Hepe.

He released his debut solo work, ‘Patchwork Cacophony’, independently (and with little fanfare) in 2014 and it immediately garnered glowing reviews for its distinctive take on classic symphonic prog. The trademark multi-layered vocals, effortless mixing of styles and intricate instrumental passages earned him wide-spread praise as a ‘huge talent’.

The album opens with the four part Fairytale (Parts 1-4) and part 1 is the wonderfully atmospheric instrumental Are You Sitting Comfortably? and then we segue into the breezy and upbeat keyboard heavy progness of Once Upon A Time. We get to hear Ben’s unique vocals for the first time and they fit the classically progressive music perfectly. The musical interplay is excellent and you really wonder how one guy does it on his own! There’s a real polish to the keyboard playing that makes it hugely infectious and I was hooked the first time I heard it. Ben’s skill on all the instruments is very impressive, the rhythm section of the dynamic drums and the funky bass especially. I think I may stumbled upon something special here…We take the instrumental route again with The Wonder Of It All, a wonderfully quirky track that has its own ideas and agenda. Cheerfully buoyant and optimistic, the instruments seem to bounce of each other with reckless abandon and without a care in the world. It is a really refreshing song that puts a spring in your step and Ben’s fingers fly fluently around the keyboards with enough energy and gusto to put even Rick Wakeman to shame! The last part is called Life Is Not A Fairytale and opens with Ben’s rather sombre piano, all the spark and joy of the previous track replaced with a more serious and morose overtone. It is a beautiful tune though and one that almost brings a lump to your throat when the delicate and fragile vocals begin. There’s an almost melancholy edge to Ben’s voice which is emphasised by the graceful notes that emanate from the elegant piano playing. There’s a serious, if thoughtful, message coming from this song and one that we should take notice of, I am left in a deeply reflective frame of mind as this four-part gem comes to a sober and solemn close.

Choices brings back that busy feeling with the energy and dynamism of the opening keyboards and drums that give it an early Yes feel. Quite frantic and yet structured and deliberate, the track opens up with Ben’s precise vocal delivery and takes on a persona not unlike a hyperactive Billy Joel. There is definitely a feeling that Ben has lifted his ambitions on this release and this stylish track is evidence of that. Just check out the infectious Hammond organ that races through the centre of the track, it’s brilliant. Counting Chickens opens with a piano/keyboard combo that brings to mind Changes from Yes, with its catchy and repetitive tempo. It goes on to become a really inventive song with Ben’s signature keyboard virtuosity stamped large all over it. There’s a calmness that falls over the track, a laid back feel before that piano led mantra begins again, addictive and really enjoyable. A great instrumental that I keep returning to again and again. Like Pink Floyd’s lesser known (but better looking) brother, Maybe strides confidently into the arena on a wave of elegant drums and edgy, funky guitars. This is where Ben takes a step back and lets one of his stellar guests take over and Marcus Taylor really does the business with some superb guitar playing. Ben’s vocal goes up a notch, full of angst and barely concealed anger and it is a great vocal performance. There’s a nice instrumental section that builds up to a rather tasty guitar solo, full of power and emotion, Marcus really reaches the heights on this one. Overall it is a song brimming with energy and disquiet and one that really shows the direction Ben is heading in with its focus and sophistication. A shortish epic at just over nine minutes, Every Day is an immersive and contemplative listen and one that gets the headphones treatment from me, to better enjoy its subtleties. A low down vocal and jazzy instrumentals give it a polished feel, in fact, it is probably the most jazz oriented track on the album with some interesting time signatures and a hesitant pace. Take your foot of the pedal and step of the incessant treadmill of life and let this calm and collected piece of music just wash over you as if you don’t have a care in the world.The middle part of the song is almost like a sci-fi soundtrack, bringing to mind epics such as 2001:A Space Odyssey and the like with its mysterious and cryptic keyboards leading the way before we are treated to synth heaven and Ben gets to show off a little, a really inventive and satisfying track that stays long in the memory.

Chasing Rainbows is a hectic, agitated and frenzied song that really smacks of Ben Folds Five on acid to my ears most of the time. Ben’s vocal has a harder, almost distraught edge and the music is full of nervous energy as it goes from animated note to animated note. A real uptempo and tumultuous jazz-infused track that you seem to feed off and become fevered yourself. There’s a sudden and sharp change of focus and feel half way through where an elegant piano brings order and calm to the chaos and enables you to get your breath back, not for long though as an insistent piano note precedes the return of the tumult, turmoil and barely concealed anger, what a great ‘in your face piece’ of music.

A haunting piano refrain opens the nostalgic and wistful instrumental of From A Spark. Dignified and ornate as if from a bygone era of cultured gentility, the piano leaves tasteful notes on your mind as it weaves its graceful and cultured path through your psyche and leaves its mark on your very soul. Bewitching and captivating, it brings the whole world to a stop for nearly seven minutes to listen and take in its restrained grandeur.

The final song on the album is the masterful splendour of Brand New Day, over twelve minutes of progressive rock that really knows its chops. The opening is all pomp and circumstance with the energetic rhythm section aiding and abetting the compelling keyboards and Tim Hall‘s potent guitar. It opens up into a classic track full of nods to the great progressive tracks of the past. Ben’s vocal is full of intent and gives the song the grounding that lets the instruments take over the show with no need for restraint. There are time changes galore and Ben plays a bewildering number of different instruments throughout this intricately complicated and lengthy work, just sit back and enjoy what is laid before you. You hear little deft homages to the likes of Camel, Yes, Genesis and even IQ as Ben opens up and runs through his full repertoire of talents. Moments of quiet contemplation mix with elaborate instrumental interplays and yet the undoubted talent of this musician never overshadows the music itself. Tim’s guitar is always there waiting to explode into the burning solos that appear towards the end of this mightily impressive song and I am just left feeling very humble and inadequate at the incredible skill and aptitude to be found in Ben Bell.

There is intelligence and a wry humour than runs throughout this remarkable album. Ben Bell has an immense talent and really knows how to put it to good use. Intelligently crafted songs that make you want to listen to them show him to be a great songwriter and what he delivers proves what a notable musician he is as well. In the world of progressive rock a new star is set to rise.

Buy Five Of Cups’ direct from the artist.

Listen to ‘Five Of Cups’ at bandcamp

Check out Brinkmanship from the first Patchwork Cacophony release: