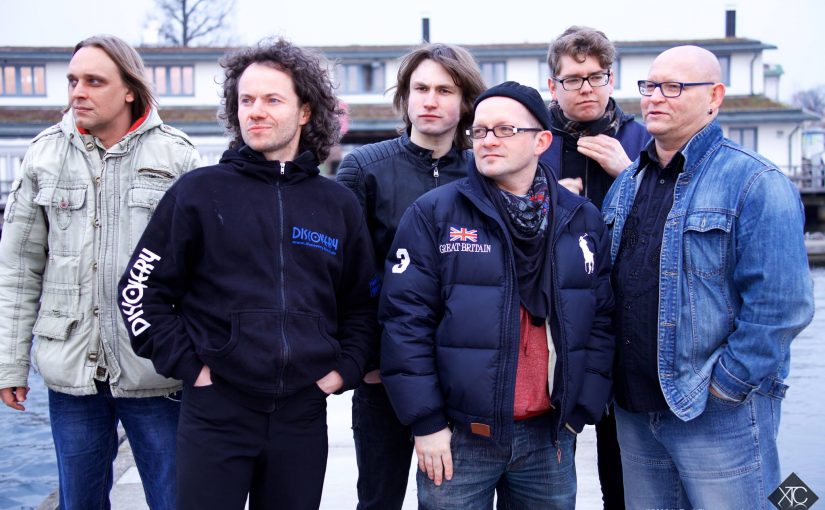 Light, airy piano chords gradually emerge from the silence and gently come to a slow halt; moments later a barely perceptible layer of tingling keyboards fills the air, bass and drum announce a pointed yet restrained arrival and a light, breezy acoustic guitar plays a Mediterranean air. Husky, breathless vocals overlay the soundstage with a bewitching melody, building to an echoing vocal, offset against a muted single piano interlude before launching into a punchy, power rock driven chorus.

Scarlet Walking, the opening track to ‘Paralyzed’,  the second album by German based band Cyril, casts a mesmerising spell which softly, almost imperceptibly seeps into your soul and weaves an enchanting magic that both thoroughly enthrals and completely captivates. As the doorway through which you pass on your journey to the rest of the album, it effortlessly exerts a wonderfully alluring and seductive welcome.

‘Paralyzed’ is a heart-warming, elegant and thoroughly endearing album of graceful vignettes and beautifully reflective compositions which mesmerise and enchant in equal measure. Unlike ‘Gone Through Years’, released in 2013 as a concept album based around themes drawn from ‘The Time Machine’ by H. G. Wells, this follow up album places greater focus on the progression of the band’s music by crafting imaginative compositions that are bathed in a fertile and embracing atmosphere of creativity, in turn forming the cradle for the most wonderful melodic expressions. Indeed, I think much of the beguiling charm of this album comes in no small measure from the careful and perceptive attention lavished on the layers within the songs, along with the context in which they stand and relate to each other. The tracks, individually and collectively, exude a permeating, enveloping atmosphere which significantly heightens and elevates the quality of the writing well above the ordinary. The soundstage is deep, expansive, full of resonance and an almost chilling clarity, capturing a moody, immersive mellowness and a refined, pervading, almost tender spirit and presence.

Within this are built a series of forced contrasts which either vigorously penetrate and stand out against the spacious openness of such an atmosphere or else gently fall back and dissipate into it time and time again. On some tracks, the growling, crunching animosity of the Hammond forms a solid bedrock and undercurrent but gives way to delicate pairings of piano and acoustic guitar, or a floating vocal like a wispy mist overlaying an isolated piano. On other tracks a smoky saxophone riff builds to an orchestral crescendo but then melts to an isolated single instrument enshrining an echoed vocal. The result is beautiful in both simplicity and finesse.

These energetic brushstrokes are in turn the vistas which give birth to soaring, melodic narratives which drive the music, giving life and voice to the plot of each song. Gravelly vocals are carried along on the back of waves of harmonic euphoria; reflective and introspective wistfulness muses over hushed symphonic arrangements. But these do not stand alone; the tone and structure is adorned, supplemented and enhanced by instrumental work designed to mirror, copy and reflect the central vocal stage. In particular, Rainbow (Track 4) is a curious delight, acoustic guitar and sprightly chord work supporting joyful, harmonies, with the occasional burst of Jamaican style reggae drums. The narratives themselves are testament, if any are needed, to the desire to craft and construct songs which can embody the spirit, the passion and the experiences of the story being told. Guy Manning’s lyrical inventiveness is the perfect match for the musical innovation of the compositions. He brings a sober, thoughtful and reflective tone to the stories being told, filled with a mixture of wistful bemusement, puzzled wonderment, weary resignation but also a powerful sense of surprised contentedness despite or even in spite of the circumstances in which we find ourselves.

The framework within which these sentiments are shared are the outstanding feature of this release. Marek Arnold is, simply put, a phenomenon, a musical dynamo of breathtaking vision and originality. Band member of Toxic Smile, Seven Steps to the Green Door, Flaming Row, Manning, United Progressive Fraternity and Damanek, his resourceful construction and astute arrangements build songs that are delightfully intricate, constantly evolving and packed with unexpected, complex and satisfying transitions. In a nod to what is hopefully the promise of a third Cyril album, the final track, Secret Place (Part 1) is an 18 minute mosaic of absorbing segues, shifting rhythms and changing landscapes.

The combination of all these elements fashion an album which is riveting in scope, gripping in detail and an absolute pleasure to spend time with. There is an exciting sense of character and emotion from a band who are themselves evolving and transitioning and exploring a whole range of progressive avenues and pathways as they do so.