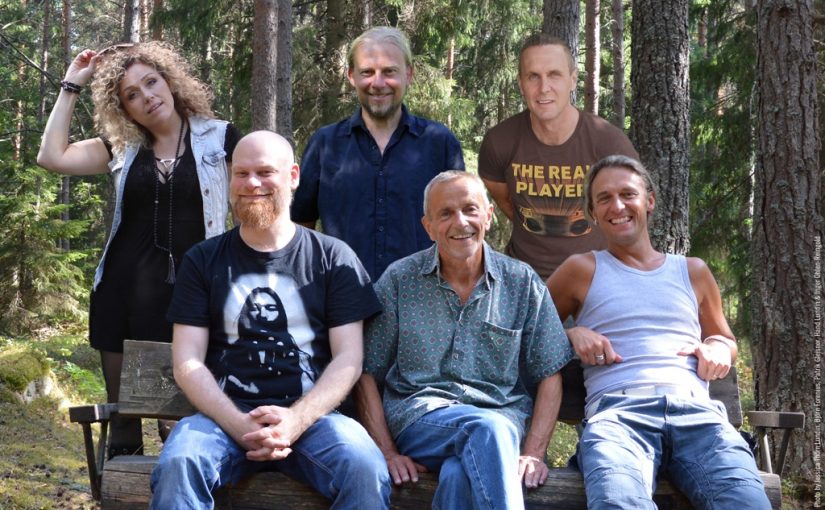 Legendary Swedish progressive rockers Kaipa, led by mastermind Hans Lundin, have announced the release of their new studio album ‘Children of the Sounds’ for 22nd September 2017. The band’s 13th album, and 8th since the act were reborn in 2002, this album features the line-up of Lundin, accompanied by Per Nilsson (Scar Symmetry), Morgan Ågren (Karmakanic), Jonas Reingold (The Flower Kings, Karmakanic), Patrik Lundström (Ritual) & Aleena Gibson, plus a guest appearance from violinist Elin Rubinsztein.

This album is a thing of great beauty, and if you know the extended catalogue of the band, it sits right at the top!! Since Per Nilsson replaced Roine Stolt from the 2007 album ‘Angling Feelings’, there has been subtle change to the style of music. Always melodic, with great interplay between Nilsson’s sometimes frenetic guitar, Reingold’s bass and Lundin’s keys.

Just 5 tracks on here, the opening title track, Children Of The Sounds, sets off with swapped female/male vocal leads interspersed with Nilsson’s piquant guitar floating over all. The rhythm section drive the music along for 11 minutes, and not one minute of this is filler. Aleena Gibson’s voice is an acquired taste I’ll admit, but I can’t imagine anybody else singing her parts! Track 2 is a 17 minute epic composition that builds right from the off. On The Edge of New Horizons is a lovely long-form work that Kaipa is noted for. Just when you think it is over, Lundin brings in a new melody or revamps an earlier one. Excellent.

The 3rd track Like A Serpentine does what it says on the tin. Beautiful melodies again and great vocal harmonies, Lundin himself taking the lead. Nilsson excels yet again!! The rhythm section to be so understated carries the tune along very sweetly. The violin places yet another layer overall.

The Shadowy Sunlight, track 4, is the shortest at just under 7 minutes. Beautiful folky violin with some fascinating guitar/keyboards interplay here. Multiple key-changes as the tune ascends to a heady climax – the subtle shift from minor to major really awaken a longing for resolution and finally Nilsson delivers! But I wonder why it finished so soon? The last track What’s Behind The Fields, opens with a feeling of déjà vu… Have we heard this before? Indeed the track develops into a showcase for all the great features of this band:- harmony vocals and instrumental wizardry of the highest calibre!!

Buy ‘Children of the Sounds’ from InsideOut