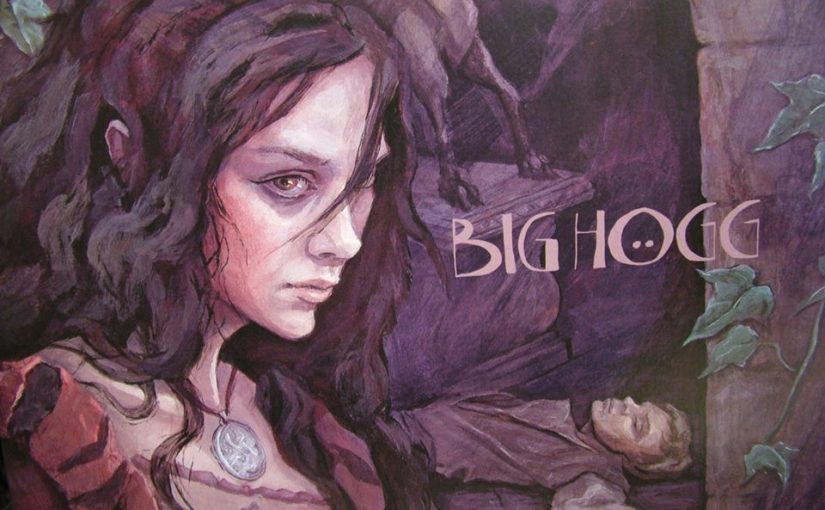 On their 2nd LP, ‘Gargoyles,’ the Glasgow-based Big Hogg mine a rich vein of post-‘Sgt. Pepper’s’ sounds, including psychedelia, Canterbury folk/jazz/proto-prog, and the background music for those dance interludes that showed up in every 60’s movie regardless of whether the film was a musical. It’s a weird and wonderful ride.

While the music encompasses a range of influences, the songs do not come across as genre-bending or as mash-ups; rather, the album comprises myriad variations on the sounds of 1967-1969 that nonetheless cohere as a unique and idiomatic Big Hogg approach. The opening three tracks well establish this programme. Solitary Way blends folky acoustic lines, male and female vocals, and flute as a musical bed over which the drums, bass, brass, and electric guitar alternately lay down their own grooves. Vegan Mother’s Day takes a funkier guitar-solos-and-horn-showcases-galore approach, while Augogo begins with jazz arpeggios to delight the clientele of any smoky underground cafe before launching into a flirtatious mod bit seemingly intended for Bob Fosse. Each mood and tempo gives way to another at exactly the right time; the changes come across as perfectly choreographed movements rather than the butting in of a new dance partner. Like Mr. Toad’s Wild Ride, ‘Gargoyles’ is a fun and thrilling ride, though it’s not quite safe as milk. The mood is ⅔ mellow trip and ⅓ psychotropic provocation as the band incorporates the punch of ‘Chicago Transit Authority’ with the Judy of ‘Dark Side of the Rainbow’. The album is shot through with a smattering of the supernatural (or perhaps simply a pagan approach to the natural?) that occasionally turns menacing, as on the imprecation of The Beast (A witch in the streets/And a woman gone loose…Burn the witch/Go up in flames) or the droning refrain and wailing at the end of Devil’s Egg, which strongly resembles the hypothetical conjoining of Frank Zappa with Drimble Wedge and The Vegetation. And the (mostly) innocuously-titled My Banana contains a rather anthemic and hooky chorus that you won’t want the children singing at school (Fuck off!/And give me peace/I want my life back/And my energy). Still, the sense of mischief is folded into quite a bit of fun and cheeky humour, as exemplified by many of the song’s titles (Vegan Mother’s Day, Drunk On A Boat, Waiting For Luigi, My Banana).

There’s really little to quibble over in this set, as the compositions, arrangements, performances, and production are all quite superb. Both lead vocalists serve their songs well, and the brass, flute, and wurlitzer sound like established members of the family rather than guests seeking accommodation. I will note that a few songs in the back half of the album employ a quick-fadeout that sounds to my ears like the band lacked direction in how to finish the tracks off. But on the whole, everything flows together nicely and the album nearly demands to played on repeat. Big Hogg have really done it: ‘Gargoyles’ is one of the more unique, fun, and singular releases I’ve heard in awhile. The album fully inhabits that 1967-1969 period without coming off as retro, and it’s at least as upbeat as it is offbeat. Don’t fear the strange and unfamiliar, folks; embrace the weird and the wonderful. There are plenty of sing-along hooks and smile-inducing horn breaks here to carry a new listener through the initiation, and once you’re in, you’ll have twice as much fun as your benighted friends. Recommended for fans of progressive music, jazz, Bob Fosse dance sequences, Peter Cook & Dudley Moore films, boozy halloween parties, and Stonehenge.