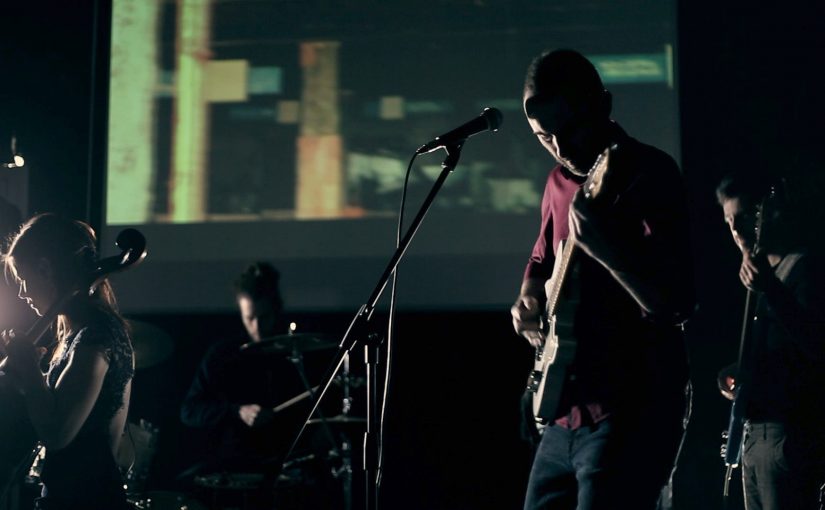 Well, there is an interesting development happening here, Progressive Rock has started to become more cerebral! In recent months we have been invited on a grand tour of the renaissance period by Big Big Train, we will shortly be appreciating the literary friendship between JRR Tolkien and CS Lewis thanks to the Bardic Depths and now we can explore the relatively new scientific concept of ‘Collapsology’.  It addresses the prospect of the impending fall of the Industrial Age, resulting in famine and disease, together with the ever continuing over population and the diminishing of the Earth’s natural resources.

This whole scenario is elegantly presented to us through this, the second album from French proggers Siljan hailing from Marseille. I must confess that this group were unknown to me before hearing this album but, nonetheless, the music certainly is impressive. This educational trend within progressive music is certainly one that I wholly welcome.  It is a good thing to have important and possibly challenging topics in lyrics. We prog folks should value debate; we should be prepared to discuss, ponder and address weighty issues, if we wanted simple or sexist lyrics, we’d listen to Whitesnake’s schoolboy innuendo surely?

Another pleasing or appealing element to this band is that they are a four piece, one of whom is a cellist, which adds another layer of depth and colour to proceedings. The cello can be clearly heard adding its own dynamics to the music but never in an overbearing manner, rather this is subtly handled while certainly adding some punch to the album.

The album opens wit the track Wisdom which has a soundbite from scientists from MIT discussing the future of the planet. It’s a shorter track but one that shows the harder edge that the band offer, riffs are quite brutal, although often offset with quieter, more melodious sections before reverting to the harder edge sound again.

The next song is Antwork, again a pretty dramatic piece, mixing some heavy, almost harsh, riffs with quieter more restrained passages. This is a pattern that is repeated throughout the album but is always an effective counterpoint to proceedings with the cello adding dynamics to these sections. Guitarist/vocalist Guillaume Arnaud is certainly very strong in both his singing and guitar work, which is excellent throughout, as he fires off riff after riff and plays some sweetly structured solos in these songs.

This album has a good flow and at no time does the attention wander for me, the cello playing keeps me interested in what is unfolding musically as it is constantly changing and makes for a good listening experience.

The sound lies somewhere between prog and prog metal in that it has the intensity of metal but is somehow not quite that harsh. This makes for a highly listenable album and thankfully there are no growling vocals to contend with, rather being a very atmospheric and enjoyable album with some nice delicate parts.

I have really enjoyed this album and I feel it has lots to interest many Prog fans if they give it a chance. I certainly feel this is a significant album and one that will provoke a lot of thought and possibly discussion in the days to come, it makes you feel hope for the world when you listen to it. While it may not offer a solution to the problems the world faces, at least it makes you aware of them and from that platform you can then decide what actions, if any, we should take.

I also feel the cello is an inspired choice of instrument as used on this album because it adds depth, dynamics and colour to the music. For me at least, the cello really lifts this album into the upper realms by being different, bringing something very special to the entire album. This is an album that you will want to return to again and again and it shows this group to have a bright future awaiting them. 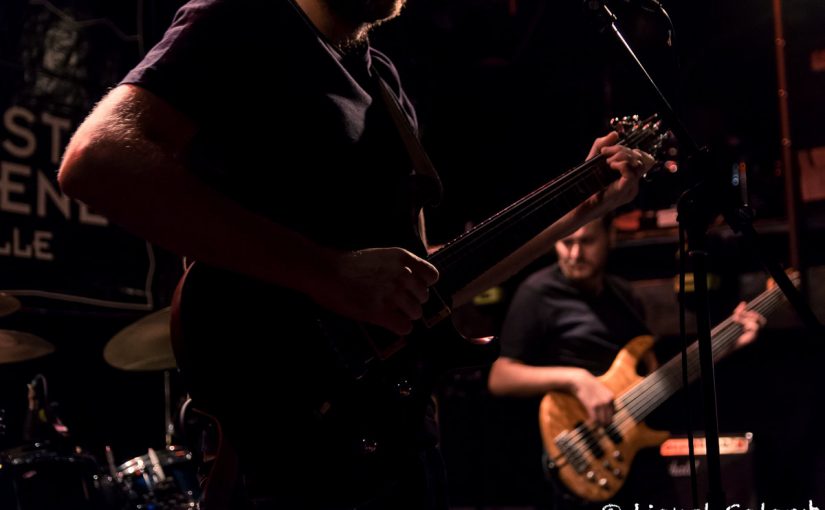 What draws you to a new album, a new piece of music or a band you have never heard before?

Quite often for me it is the album art, sometimes the art alone is quite evocative and full of meaning and the music is, well, not! But most of the time, if I like an album cover at first glance it tends to be that the music will be good too.

When I first saw the artwork for ‘Light In Chaos’, the new album from French band Siljan, I was impressed by the contrast between darkness and the light coming out of the clouds, impressed enough to want to hear the music for definite… Siljan hail from France, they were formed in October 2015 by Guillaume Arnaud (guitar/vocals), Guillaume Lehagre (bass) and Jules Pelletier (drums).

Named after a lake in Sweden (formed by a meteora and red in colour), the band performs a musical fusion between alternative and progressive styles, inspired by the complexity of prog music and influenced by the energy of the alternative and post metal scene.
The main criteria is above all to show a continuity between studio performance and live gigs, based on groove.

Siljan recorded and mixed Light in Chaos at Blackwhale Studio, Aubagne, France in the summer of 2016. Unfortunately Guillaume Lehagre had to leave the band for professional and family reasons just after the recording sessions, and was replaced by Yoann Colomb. After a year of writing and recording, the band is ready to play ‘Light In Chaos’ live for the first time in 2017.

‘Light In Chaos’ is an album that talks about  wandering, solitude, lack of communication, chaos theory, faith in humanity, ecology, feminism, loss and mourning.

First track Stockholm is full of edgy guitars and intricate drumming all brought together by some stylish bass guitar. It takes me a few seconds to tune into the plaintive vocals but their fragile edge gives the track extra pathos and meaning. To be fair, I wouldn’t call this metal, it’s more progressive and restive than that and flows beautifully from beginning to end. This first song really does echo the moody artwork and my hopes are high for the rest of the album. Rewind opens with a powerful and expansive riff that knock you back for a second before things take a step back and become altogether more reflective. There’s quite an intense chorus with the low key vocals coming to the fore. This track harks back a little to 90’s grunge with the fuzzy guitar work and  dynamic drums and, all the time, that impressive bass playing keeps things moving along at a fair lick. There’s a lovely interlude just over half way through with some delightfully light and airy guitar work before it opens up into the catchy chorus again and then closes with that staccato riff.

A full on and in your face riff opens Hollow Words as we move more into a distinctive metal style. The vocals remind me a bit of Creed and the whole track does have a feeling of that alternative metal scene. Charismatic and potent, this song really stamps its authority on your mind as these three excellent musicians work together in harmony to deliver great music. A guitar solo reminiscent of Audioslave with it’s Morse Code style adds a clever touch to what is a really addictive track and one that will definitely become an earworm. Title track Light In Chaos sees the bass really take centre stage and the Red Hot Chilli Peppers influence is there, front and centre. The most instantly accessible song on the album, it has a jazzy, upbeat vibe to it that is really infectious and the vocals mirror this. The grin-inducing funky guitar is the driving force here, adding a vitality and busy feel to the track. An instant toe-tapper if ever I’ve heard one. Hunting Day brings the full on rock facade back with its insistent hefty riffing and forceful drums. A step back is taken and the vocals have a sincere quality, low and meaningful. A touch of melancholy has entered the music, a wistful and pensive tone to the vocals and a definitive seriousness pervades all. Intelligent songwriting and a maturity runs throughout the album and it is one that I have returned to many time recently. An impishness hits me with the skipping guitar beat that introduces Consolation. A more considered track, not exactly highbrow but without the raw forceful tone of the heavier songs on this release, nostalgic and regretful almost. Listen to the intricate musicianship that is delivered, these are accomplished musicians and its shows. A thoughtful and sedate piece of music that leaves you in a contemplative frame of mind.

Red Waters begins with a dominant, driving riff that immediately grabs your attention, there’s a reckless and excitable feel to the music, the vocals are nervous and impatient. A modern power trio, this track shows Siljan can rock out with the best, its unrelenting and incessant sub-plot means you are really on edge and cannot sit still. I like the oasis of calm that appears like a mirage in the middle of the track, everything taking a moment of reflection, allowing you to get your breath back. The resoluteness returns to take us to a emphatic and forceful close. The album comes to a close with the excellent instrumental Dawn. Like a calming walk through a pastoral and tranquil soundscape, there’s a serene and placid aura that surrounds this track. I find my heartbeat slows significantly and I feel at peace with myself and my surroundings, musical feng shui if you like. More than once I found myself immediately returning to the unruffled repose promised by these three exemplary musicians on this captivating piece of music.

A darkly emotive musical journey at times, ‘Light In Chaos’ is music that resonates with you at a deeper level. These are wonderfully evocative songs that move between the dark and the light to deliver a superb immersive experience and Siljan are surely going to be a force to be reckoned with, my recommendation is that you buy it as soon as possible!

Buy ‘Light In Chaos’ from bandcamp