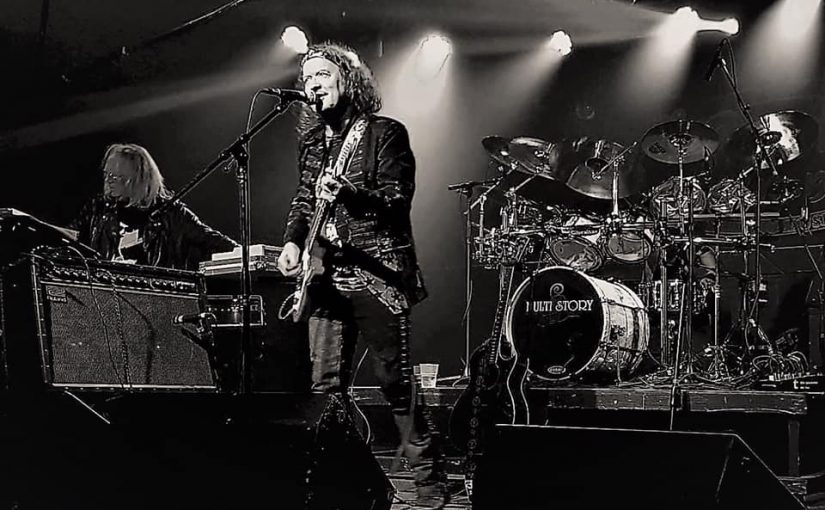 Multi Story have a long and somewhat checkered history. Hailing from South Wales, they came to prominence in the mid 1980’s when their blend of symphonic progressive rock led to them being chosen by Birmingham’s finest Magnum as a support group for their On A Storyteller’s Night tour in 1985, memorably playing a set with at the Dominion Theatre on Tottenham Court Road in London.

At that time Multi Story had released their debut album ‘East West’ that was released on Revolver / FM Records who were a Wolverhampton based label who had a run of successes with various acts including Exodus and other early thrash metal outfits. After the tour Paul Ford left the band who then decided to continue and recorded a second album for FM /Revolver called ‘Through Your Eyes’ after which the band dissolved and went their own separate ways.

Vocalist/Guitarist Paul and keyboard player Rob Wilsher had been at loggerheads with each other for many years but in 2014, some thirty years on from ‘East West’, a peace was sought (and achieved) which ultimately led to a reconvening of Multi Story activities. The band found a new home on Dave Robinson’s Festival Music label, recording and releasing the album ‘Crimson Stone’ in 2016 and commenced live work again appearing at the Winter’s End Festival in 2016 and also at HRH Prog in 2017.

They also recorded a live in the studio set called ‘Live at Acapela’ that acted as a summation of their career thus far, taking, as it does, tracks from their first three albums in a revamped updated fashion.

That nicely brings us to this latest album ‘CBF10’ issued this October, again through Festival Music, and the first thing that strikes you is just how beautifully presented this album is. I has a very striking cover, designed by Tommy Larsen, and a loose concept that really comes to the fore towards the last half of the album, from the track Freeway Army onward.

More of that later, the album opens strongly with the epic track Signs and Traces and its fabulously twisty guitar riff and Rob’s evocative keyboards. Quite a stunning opener it is too, thundering along with several different sections to it, all of which sound glorious. Sharp Recall follows and has some great Hammond parts from Rob and some great piano lines too. This track is Paul and Rob playing everything between them and still sounding very much like a band in the process, with a great solo towards the end from Rob.

Celluloid Star is up next and it is a cautionary tale on the trappings and falsehood that “fame “offers and then often fails to deliver. This well written song is very dramatic with lots of fabulously evocative keyboard sounds, a sturdy bassline and hard hitting, subdued guitar parts running throughout. Paul’s vocals sound very clear on this song, he is in fine voice, sounding a little bit like his old touring pal Bob Catley of Magnum at times (and that is no bad thing, in my opinion).

Freeway Army introduces us to a different type of hero, the lone drifter on the outside of society. He lives differently but not in a selfish manner and wishes no harm on anyone but wants to be free to live a simple unfettered life. A free spirit who roams the roads on his motorcycle, tearing up the miles with the wind in his hair and nothing to hold him down. Last Man Standing is another fine and moody track, it talks about being the last man standing and the isolation and struggles that he faces at that time and the past he struggles to come to terms with. It is a very sad poignant piece indeed, once again with sympathetic musicianship really echoing the isolation of the lyrics. Easy Rider return us to the lone biker and his fate as he is attacked and gunned down by redneck fools who mistake his solitude for emptiness and weakness and so attack him and destroy all that he stands for, freedom…

Firing All Six is all about bravery in standing your own ground against the odds or being outnumbered. Rebel Inside is the penultimate track and is about going in a different direction, usually taking a harder path because you are choosing to stand apart from, and not following, the crowd. This is often safer and yet less rewarding than being a free spirit and following your own dreams and desires. This track features a graceful guitar break played with passion and taste, making this a exceptionally fine song indeed. Paul Ford’s acoustic guitar and heartfelt vocals are very welcome too.

The final song CBF10 is where the redneck is executed for the slaying of the rebel. He confesses and blames the voices in his head and says how sorry he is for his actions and how he thinks they had it coming, or that’s what the voices said! The song ends with the words “It came easy” as his life ends with lethal injection.

This is a very good album and is a real tribute to the vision that Paul and Rob had and have realised. It has some very strong moments and I feel that it would work very well in a live situation where the songs could be extended to maximise their potential. But, for now, this is a mighty fine album and one that I will return to again and again.

Order the CD from Progrock.co.uk here: