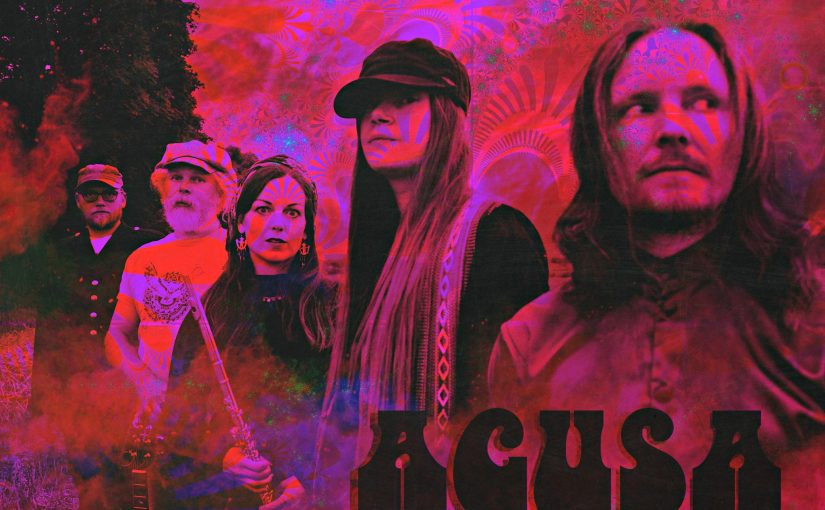 Some of my favourite albums are ‘Full House’ by Fairport Convention, ‘Ten Man Mop, Or Mr. Reservoir Butler Rides Again’ by Steeleye Span, ‘Morris On’, ‘No Roses’ by Shirley Collins and the Albion Country Band and ‘The Bones of All Men’ by Richard Thompson, Phillip Pickett and The Fairport Rhythm Section.

See it’s most definitely not all about the prog, and why do these albums draw me in? It’s because they straddle a wonderfully eccentric line, they walk the tightrope between the traditional music of different era’s and the great big electric beastie that is rock music, taking tunes that would normally be played acoustically and amplifying them up, and let’s face it some of the music is pretty far out there before you start adding electric guitars and drums and bass.

This is where Agusa come in, another album Lord Martin of Progradar Towers reckoned would be right up my alley, over it came, and me, never having even heard of the band before, thought you know what, let’s have a listen and see what I reckon.

If you want a quintet of musically talented Swedes jamming together, mixing early Pink Floyd, traditional music and some highly complex and layered instrumental music, with the flute sound reminiscent of 70’s Tull filtering through it, then my friends you are in the right place.

Formed back in 2013 by Mikael Odesjo (guitar) and Tobias Petterson (bass) the band has grown organically to include Jonas Berge on keyboards, Tim Wallander on drums and percussion and Jenny Puertas on flute.

These five tracks here are a heady psychedelic musical brew as on tracks like Sorgenfri (at 5 minutes the shortest track on here) the duetting between Puertas flute, Berge’s amazing Hammond sound and the guitar of Odesjo sound like a collision between late 60’s Deep Purple and late 60’s Tull, with an absolute driving beat powered by Wallander and Petterson, the momentum builds and builds leaving you with a great big daft grin on your face, all built up round tunes and melodies that sound vaguely traditional in feel.

This is Agusa’s strength; all the tunes and melodies on this album are imminently hummable and are performed with the right balance of subtlety and power, and there is so much going here that you hear new bits every time you listen.

I am, and always will be, a sucker for mixing traditional sounds with electrical rock bands (hence my love of orchestral rock like ELO, Deep Purple’s Concerto for Group and Orchestra, Mike Oldfield amongst many others) and the way that the flute is the substitute for the voice here is sublime. Den Förtrollade skogen (the enchanted forest – according to translate) is all Elizabethan in intent with the flute and sounds that push the flute to the fore, whilst Wallander and Petterson get to show their chops off with some incredibly funky breaks, and another amazing solo from Berge on keyboards.

This album is chock full of wonderful musical moments like this, and put an absolute smile on the face.

With two tracks here (Landet Längesen & Bortom hemom) clocking in at over 10 minutes long, these are where the band really stretch out and pull all their influences together, and it is a testament to their skill and power that this album is an absolute delight to listen to.

Jenny Puertas on the flute is a star throughout, the sound weaving and soaring throughout, pushing the tunes on where needed, pulling back when it’s time for Jonas Berge to play some of his lovely wonderfully jazzy blues riffs on his delightfully retro Hammond sound. There is no finer sound than a Hammond in full flow, and there is plenty to delight fans of that sound here, there’s a touch of the Jon Lords or Graham Bonds about the sound, and it’s that wonderful melting pot of blues, rock, jazz and everything else that adds so much to this album, and pushes it out of traditional genre boundaries.

The soaring riffs and singing melodies of Mikael Odesjo’s guitar beautifully compliments the keyboard and flute, and whilst he has his moments it’s interesting to hear how he pulls back to let the flute fly. Of course the back line of Wallander and Petterson are the rocks on which this mighty castle of sound can be built, and the intuition and skill all 5 bring to the table is a masterclass in musical collaboration.

This is an absolute must for anyone who likes the instrumental sound of early Pink Floyd, the playfulness and intricacy of 70’s folk rock and intelligent well-made instrumental music.