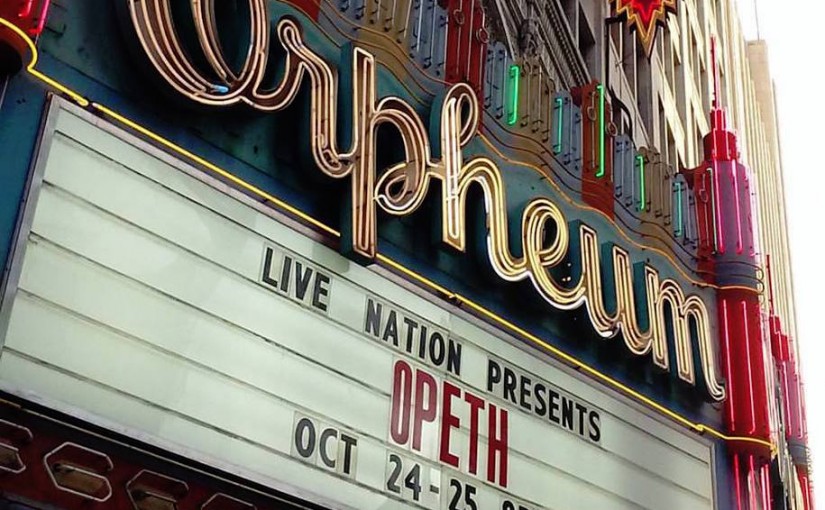 Shawn Dudley’s account of Opeth live at the Orpheum Theatre, Los Angeles on the 24th October 2015. Opeth concluded their month-long anniversary tour with a two city trek to the States for shows in New York and Los Angeles. Originally planned as one show, the tickets for the Los Angeles concert sold out so quickly that a second date was added for the following evening.

The elegant Orpheum Theatre (1926) is the perfect location for nearly 3 hours of Opeth, including a full performance of their classic ‘Ghost Reveries’ album, celebrating its 10th anniversary this year.

To deafening applause the band walks onto a simple stage adorned with only a backdrop and some candelabras and immediately storms into the first three progressive metal epics that begin the album; Ghost Of Perdition, The Baying Of The Hounds and Beneath The Mire. These songs demonstrate the peak of Opeth’s blend of beauty and brutality. They attain a perfect balance; the fusion of progressive rock sophistication and precise metallic brute force. Mikael is in fine voice this evening and the 50/50 split of clean & gruff vocals in these songs are handled with equal skill.

The lineup on stage is quite different than the one from 2005, only singer/guitarist/mastermind Mikael Akerfeldt and bass player Martin Mendez remain. The ridiculously talented drummer Martin “Axe” Axenrot joined in 2006, lead guitarist Fredrick Akesson joined in 2007 and keyboardist Joakim Svalberg joined the band prior to the ‘Heritage’ tour in 2011.

The new players color and enhance the studio arrangements, there have been numerous little tweaks made to these songs and that is most evident in the keyboard parts and the more fluid approach Axe has to the drums. The more improvisational approach to their recent albums has really taken their live performances to new heights.

The hypnotic Atonement marks the first major departure from the studio version as this modal vamp has been extended to twice the album length to accommodate keyboard and guitar features. I’m really hoping they recorded one of these shows, I would love to have this arrangement in my collection.

Other highlights of the first set included the ballads Hours of Wealth and Isolation Years, which had never been performed prior to this tour. Recent reports from the London date of the tour indicate an overly rowdy crowd but that was definitely not the case in L.A. last night. The audience was respectful during the quieter parts of songs; they applauded solos and saved the hollering to the breaks between songs. During the quiet vocal & piano segment of Hours Of Wealth you could hear a pin drop in the theatre.

After taking a 20-minute break the band returned for a second set tailor-made to please both their more recent progressive rock fans and their older (though often younger) metal contingent. I’m one of those that love both eras so I’m a happy camper no matter what. There was a wide age range at the show, I saw many gray-hairs like myself mixed in with the 20-somethings and it’s great to see all these people gathered together over their mutual admiration for this band.

The clean vocal selections featured excellent performances of Eternal Rains Will Come, Cusp Of Eternity and Voice Of Treason from ‘Pale Communion’, a fiery rendition of I Feel The Dark from ‘Heritage’ and the lovely melancholy of To Rid The Disease from ‘Damnation’. The heavier tracks consisted of crowd favorites The Leper Affinity (‘Blackwater Park’), Master’s Apprentices (‘Deliverance’) and encore The Lotus Eater (‘Watershed’).

The sound in the Orpheum Theatre was excellent and the mix was just about perfect. Loud enough to be forceful without ever becoming shrill or painful, each instrument clearly defined and the drum sound was amazing. There were a couple of technical glitches with the keyboard rig and while waiting for it to be fixed Mikael said to the crowd; “Things are breaking down. You almost never see that in this day and age. Usually when you go see a band these days they sound perfect, just like the record. Wanna know why? Because they’re playing the fucking record. We don’t.”

As usual for an Opeth concert Mikael had his sarcastic comedic cap on for the duration of the night.  His playful back and forth with the audience has been a staple of their shows for years, there are youtube compilations dedicated to it. My favorite bit tonight was providing a play-by-play narration while tuning his guitar.

Hearing ‘Ghost Reveries’ performed by the current lineup really made me appreciate how significant that album was in their evolution and how much Mikael had grown as a singer and songwriter. It was the direct follow-up to the mellow progressive rock album ‘Damnation’ and I think Opeth responded by delivering both their heaviest but also their most varied and accomplished record to that point.

Mikael added a full-time keyboard player to the group (Steven Wilson played keyboards on the ‘Damnation’ album) and that immediately allowed him to start more fully embracing his love of 70s progressive rock.  ‘Ghost Reveries’ started them on the path that would eventually lead to ‘Heritage’ and ‘Pale Communion’ and growing acceptance in progressive rock circles. Still, Mikael is proud of the earlier metal era of Opeth (deservedly so) and that was proven yet again by the passionate performance this evening.

Many bands celebrating their 25th anniversary are looking back at previous successes that have passed them by.  In the case of Opeth, I think their peak has yet to be reached.