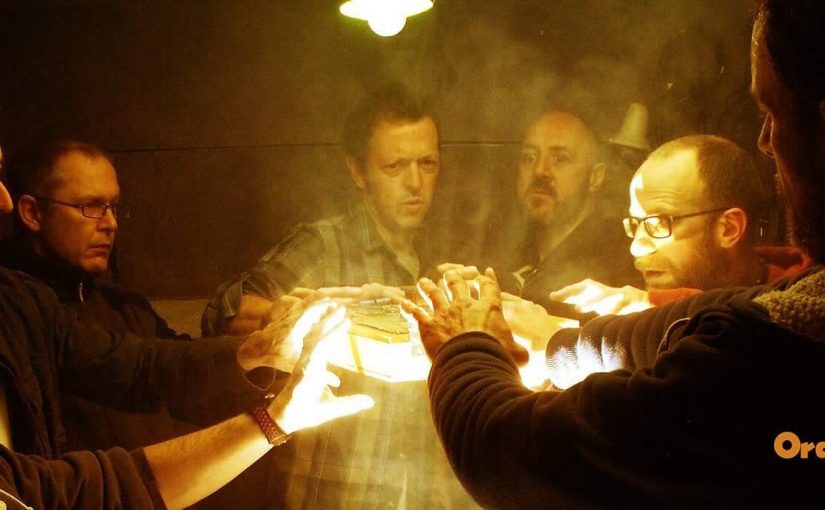 “Originally devised in 1973 by eccentric producer Tomska R Huntley and destined for German TV, Tope’s Sphere was set to be a ground-breaking animation featuring a live soundtrack by 1970’s UK/Germany supergroup, Klementine Uhren. The series followed Tope, the knitted monkey protagonist, with his sidekick Chode on their outer-space adventures accompanied by lush layers of psychedelic music. Unfortunately for Tomska, Klementine Uhren were unhappy with the final mixes. They promptly disappeared with all the tapes for an ‘extended session’, never to be seen again. Tomska was bankrupted and his dreams shattered; he dumped what was left from Tope’s Sphere into a skip and vanished into the depths of the Himalayan Mountains “.

So reads the Bad Elephant Music promotional material. I think of myself as a Kraut rock fan but I will be the first to admit it missed me completely. That maybe me being a 9 year old in 1970 at the time and I am sticking to that rather than plead complete ignorance of something I feel I should know. It creates a mythology of nostalgia and finds me want to know more of this television series.

It is a story Of Tope, a knitted monkey and Chode his sidekick, a reimagining of the TV series in musical form. Musically it is uplifting and delightful, I hear so many different influences here but imagine Gong’s ‘Flying Teapot’ saga translated into a children’s series sound track.  I won’t single out individual tracks here but the fun the guys had in the studio creating this is glaringly obvious and I’d love to hear the outtakes.

They have produced something quite unique which holds a reverence for the past but has an amusing irreverence in the way they have made the music with more ‘in-jokes’ from the genre than a Brian (may he rest in peace) Pern series.

It opens with an audio lift from the original series telling one adventure against an arch-enemy of Tope and the battles worthy of any Steampunk adventure. You follow the tale from end to end with a solid narrative and characters. Good versus evil, the music and vocals representing the characters well. I hear Hawkwind, Gong, Grobschitt, Public Image Limited and Ashra Tempel all in the mix. Musically it is not hard work yet it is incredibly accessible and has its own unique identity.

This is, in true Prog tradition, a concept album but it is also a rollicking space romp of hilarious proportions in anyone’s book. Yes, you read that, hilarious proportions. I am a melancholy soul at best and my taste in music reflects that but I do like to smile and this album makes me grin from beginning to end. In classical music there are a couple of albums that act as doorways to the music, Prokofiev’s ‘Peter and the Wolf’ and Benjamin Brittan’s ‘A Young Person’s Guide to the Orchestra’, there is even a similar album for King Crimson that I seem to remember. This album, for me, is a great way to introduce the “young mind” to what good modern Psychedelic/Prog should be like without melting the brain. When I say ‘young’ I mean those with no knowledge or background rather than your average Bieber obsessed pre-teen.

This album is yet again proof the music industry should take risks and invest beyond the core “karaoake” style ‘zero outlay, high short term yield’ mainstream we have at the moment. I will not be forgetting this album come December when I look back and review 2017.

You can listen to the whole album here: