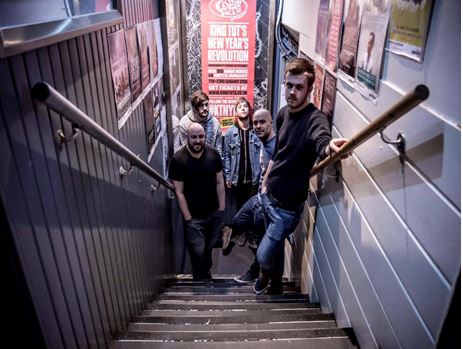 I have had this CD floating in and out of various players around the house for a few months seducing me, whilst the glorious cover artwork from Sandy Wilson calls to me like the outstretched siren in the picture, waiting to drag me into it’s depths and hold me in her cold, watery embrace. Coming together in 2011, with influences ranging from such luminaries as Oceansize and fellow Scots, Mogwai and hailing from Auld Reekie, these Glaswegians made 2015 a very busy year in their drive to push themselves, tirelessly, with support slots for the likes of My Vitriol and a UK tour of their own as well as recording ‘OMNI\ONE’. There is no chance of finding heather growing under these lad’s feet as they strive to feed the demand of a rapidly growing fan-base. Tranz/Zero – the instrumental introduction with desolate echoing guitar notes hammered from the fretboard, sets the scene of a gloomy mist drifting through the Glaswegian streets, the wind echoing through the dark alleys dispersing suddenly as it turns the corner… Leading seamlessly into..

Permanent Revolution – a tick-tock rhythm issues in the interlaced vocals from Ian and Chris for the first time, playing off each other, sailing together and drifting apart, with the sense of urgency growing, the guitar solo begging as the boys sing ‘take me away’. The beating drums from Chris and Mark’s bass builds a wall of sound as the guitars scream to a halt.

Echoing guitar push in the next track Ruins, drum and bass marching together as the desolation all around collides with the bitter vocals, slowing into a solo with a glimmer of hope. Could there be a chance of escape? The vocals rise and the instruments overrun into a dramatic finish, the mist floats in again, obscuring the bid for freedom and, when it clears….

A guitar warily ventures out into The Bones that Rock the Cradle, fearful of the piano striding forward. As the vocals search for a way out they are blocked by a wall of menacing six strings, reinforced by the bass, as the drums try to push their way through. Will there be a getaway down the shady back street, the guitars give chase as a defiant promise to return is thrown back at the pursuing six strings.

Catching a breath as the dreamy keyboards give respite on Tonight. The pursued appear to have given those tracking the slip for now. Simon and Garfunkel style harmonising eases troubled minds as emotions rise, whilst the guitars search in the distance and the drums berate them. The net closes in and suddenly the guitars emerge in front of the fugitive voices.

Acoustic, whispered regret and decisions not made. The guitars’ Hangman  looms menacingly over the voices. Muttering, was it just that they did not get out when the piano afforded them chance or was it that they prevented themselves leaving?, cymbals ring dizzily around their heads and the fret drifts in again. The vocal realisation that the chance may have passed as the guitars and drums cry triumph. Will the words sink Under the Surface with the weight of the music? Still refusing to do the guitars angry bidding, causes them to stop abruptly and tinkling keys ripple against the voices, before waves of guitar and drums hit and raise cries for a way out. A lull in the tide as the vocals drift, the acoustic guitar keeping them afloat until the waves come crashing in again and the voices rage against them. They fall away again and drums swim through the waters as the the guitars circle before plunging in, smashing against the metaphoric rocks, to silence.

Regaining consciousness, vocals sail lazily on a current of drums and low piano, the conscience is pricked with Needles of remorse as echoing, re-verb guitar notes suggest that something holds the songs there. On calm reflection another may be to blame, allowing a turmoil of guitars to enter the head, but drowned out and pushed aside by the verbal insistence that the fault lies elsewhere.

The guitars hunt with renewed vigour in this Age of Terror, charging forward, drums announcing the vocals as they do battle and stand their ground against the heavy chords and bass, harmonies. Forcing the instruments to retreat, before they attack with dark rhythms. Keyboards rise and replace the vocals against the guitars who, with a whine, fall from the edge.

The vocal,s accompanied by faithful acoustic guitar notes, warn they will be The Executioner to come as strings soothe the unsuspecting into slumber. “Run”, they warn, as ripples of piano and bended, distorted guitar strings toss and turn restlessly in dark dreams.

X is Mandatory, as the whistling wind and cold mist shrouds haunting piano, in this short instrumental, finding the acoustic beginning of the end, the last and title track….

Omni\One. Melancholy is relieved by the gentle vocals with promise of a change to better things. Hopeful acoustic guitar and piano take the lead as the guitars, vocals and all other instruments rise to a more peaceful resolution in release and then silence.

There is a Gothic type melodrama to the music on this album, a yearning and longing which may on the surface appear gloomy but, just as Anathema have accomplished, Halo Tora create beauty from these elements and carve them into something wondrous, that clings to you, won’t let go and you are happy it is there.

Look out for these boys crossing Hadrian’s Wall, they intend and deserve to be greater. Mark them as ‘one to watch’.

Buy ‘Omni/One’ on digital from bandcamp