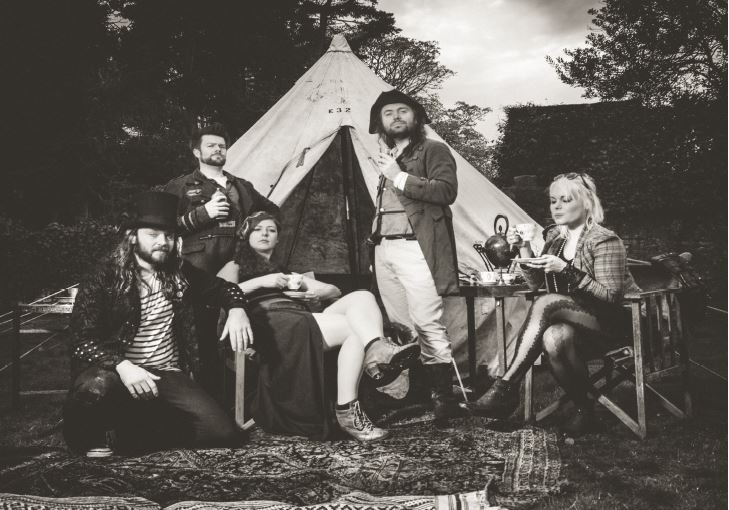 You may gather from the name of this website that it is aimed at reviewing, and talking about, Progressive Rock and, most of the time, that would be an entirely correct assumption to make.

However, I am not just a prog-rock fan, I am a music fan first and foremost and that means any type of music that catches my ear as being different and just bloody good to listen to.

I’ve written reviews of hard rock, heavy metal, folk, blues and even viking metal (no, me neither!), you name it, I’ll listen to it and write about it if I think it fits into my warped view of what makes good listening material.

Folk driven they may be but that’s about where the similarity to traditional folk begins and ends with the North-East’s Driven Serious, a band who I was introduced to by the excellent Hartlepool based photographic artist Howy White.

Howy put me in touch with the band’s main-man Rob Jones, who introduced me to their blend of punk, folk, steam-punk and general mayhem and I haven’t looked back yet….

Driven Serious formed in 2011 and has been gigging in the North
East and beyond since 2012 with its current lineup – charismatic
frontman and songwriter Rob Jones, award-winning Shetland
fiddler Cathy Geldard, bassist and multi-instrumentalist Tim
Packer and drummer and percussionist Johnnie Walker – to which
they now add the stunning voice and cello of Katie Hall.

‘Ballad of Bones’, follows up their 2013 album ‘The Importance of Being
Serious’ and showcases new fifth member, cellist and vocalist
Katie. The title track is a really emotive five minutes of exquisite folk rock which only occasionally betrays the band’s punk undertones. The string biased opening frames Rob’s distinctive vocal as he begins to tell you his tale. The gentle folk heavy backing music is really well crafted and removes any rough edges. When the track picks up pace it becomes a real foot-tapper, the drums leading the rhythm section quite impressively. The harmonies on the melancholy chorus are just about perfect. When you go past the two-and-a-half minute mark there is a dramatic, short instrumental interlude that just makes you stop and think for a bit. This is really intelligent and, at times, uplifting folk music with a rocky edge to it and, I for one, really like it.

The three live tracks are utterly compelling and will make you want to go see these remarkable musicians play live as soon as you possibly can. Sinking Sand (recorded live at The Cluny) is dynamic and edgy with a really memorable and emotive chorus. The staccato violins are ably supported by the pumping bassline and Rob delivers some heartfelt vocals, again, the punk tendencies seem to be keeping a low profile on this song, the violin solo with bass accompaniment that close out the track is actually quite exuberantly spine-tingling. Crucifix Kiss (recorded at The Twisted Lip) is a more low key and gentle affair. Maybe not quite ‘get your lighters in the air’ but, you know where I’m coming from. On this song the stringed instrument is king, providing a really sombre and wistful backdrop to the pensive and emotive vocal. Everything changes about half-way through as that mournful air seems to dissipate somewhat and a feeling of the sun breaking through the dark clouds emerges. These extremely competent musicians lay a vivid backdrop of music that really appeals. Fasten your seat belts, the blue touch paper has been lit and off we go! World of Fear (again recorded live at The Cluny) definitely has that punky edge to it, edgy riffing and a superb electric violin power this strident track along at a breakneck speed. Rob takes on a bit of the wild man in his vocal delivery, a hot and sweaty cauldron of intensely theatrical music that assaults the senses to leave you battered, bruised and yet with an inane grin on your face as the animated violin continues to hit you from all sides.

An utterly irresistible force of nature, these self-styled ‘punk-folk’ exponents deliver on all fronts. It’s Folk music Jim, but not quite as you may know it (to paraphrase Gene Roddenberry), it’s a whirling vortex of energy and musical nous and one that I hope to revisit soon.

Buy ‘Ballad of Bones’ from bandcamp 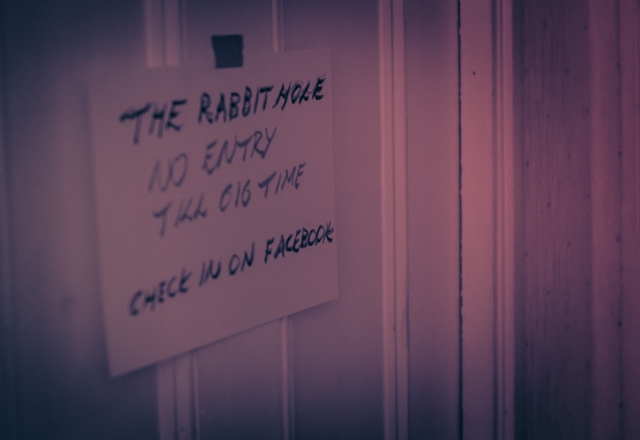 “…there’s nothing more intimate in life than simply being understood. And understanding someone else….” Brad Melzer.

The juggernaut that is mainstream music is a big, ugly bloated behemoth that just tramples all and sundry underfoot. It is a money making machine, long gone are the reasons why people created and performed music in the first place and I am saddened by this loss.

The fact that electronics are much more simple to use and cost relative pennies means that music can be worked on, mixed, mastered and changed beyond all recognition from the first notes that were written. Yes you can achieve near perfection but, surely, you are losing the heart and soul of what the artist intended?

Thankfully, every now and then, something awe-inspiring happens which restores my faith about all that is good in the music industry and, to a lesser extent, humanity in general.

Some artists can strip the music back to the bare essentials, to the core of their creativity to take part of their own soul and create something that is full of joy, sadness and, above all, wonderment. Lets take a step back a bit to earlier this year when I first heard Lee Maddison’s gorgeous ‘Maddison’s Thread’ album. A release full of folk tales of wonderment, sadness and joy performed beautifully by the self-effacing musician. Like you do, I struck a conversation up with Lee on social media and ended up reviewing the album for this very website, which you can read here:

Now things may get convoluted here but the brilliant artist Amanda White did the rather superb album cover for this record: And, by a stroke of luck, I already knew Amanda’s husband Howy White through his association with the Brendan Eyre and Tony Patterson ‘Northlands’ project for which he photgraphed the cover art (still with me so far?).

Both Howy and Amanda are long time supporters of Lee Maddison and have arranged a couple of small and exceedingly intimate gigs for Lee in the cellar of their Hartlepool home, imaginatively re-christened The Rabbit Hole. I was lucky enough to be invited to one of these hallowed gatherings this last weekend. Now, does it all make sense? Howy is decidedly passionate about these little soirees and had decorated the cellar but would not let any of us go down until gig time so the 15-20 guests had a great time chatting while Lee and his fellow musicians were setting up.

Joining him on this night were acclaimed fiddle player, the ‘ever ready with a smile’ Stewart Hardy and the laconic and laid back Nigel Spaven on 5-string acoustic bass. What we were about to experience would be nothing short of life-affirming and magical…… When the word was given we all filed down the, decidedly uneven, stairs into the wonderful olde-worlde cellar which was an incredibly intimate and quite surreal setting.

A mixed selection of chairs, benches and stools had been set up for the audience and we were literally only feet away from the performers. It doesn’t get any more intimate than this. The atmosphere was one of hushed expectation and excitement and then Lee relaxed everyone with a little quip before starting out on the first half of the set. He has a quite outstanding vocal and one that is instantly recognisable. The first song was the upbeat and whimsical One Day and got everyone in the mood, toe-tapping and clapping along. This was followed by Misty Morning Blues, an enchanting and heartfelt journey into Americana and the first of the new tracks that Lee was showcasing, a more stripped back and natural folk song entitled Charlatans and Blaggers. This was a rip-roaring sing along that really got the audience inspired and nodding along appreciatively and this mood was carried over to the first request of the night, the opening track from Lee’s first album, The Viking’s Daughter, a lilting delight of a song where the vocals really are the key and the deft skill of Stewart’s fiddle playing comes to the fore. The absolutely mesmerising performance continued with The Country Song, another great sing-along track that just flies along and in this setting it lent a real buzz tot he proceedings, the catching, heartfelt Come The Springtime where the emotional performance brought a lump to your throat and two stunningly delivered cover songs, Tree By The River (Iron and Wine cover) and Lady Eleanor (Lindisfarne cover) where the three musicians led a merry dance through your soul. Sandwiched between these two was one of the highlights of the evening for me, the velvety loveliness of the jazz inspired Night Circus (my request actually) and it just left an utterly relaxed feel to my whole being, the hairs on the back of my neck rising from the unique experience of these matchless musicians in such an iconic venue.

The small crowd walked back up the stairs for the interval talking in hushed tones of reverence after the sublime experience we had just been party to. Set 2 began with a great, upbeat cover of Paul Simon’s Slip Sliding Away and then Lee, Stewart and Nigel then proceeded to treat us to the sparse beauty of an utterly spellbinding version of Where Eagles Fly. Haunting and quite hypnotic, it just left me numb with admiration. This was followed by another new track Tumbleweed, a more deliberate and contemplative track that shows where Lee will be going with his new album. The enthralled audience were showing silent appreciation at the skill and artistry of the players and every track was greeted with very appreciative applause. The solemn and melancholy A Crooked Mile Home left a slight feeling of sadness in my soul but its sheer beauty just left me slack jawed. The complete contrast of the tongue-in-cheek light and airy Making The Morning Last had us all bouncing around with its breezy and carefree delivery and Stewart’s impish fiddle playing was a joy to listen to. A delicate and poignant cover of Galway To Graceland (Richard Thompson) was followed by the biting satire of Parasiteful, a song delivered with edgy aplomb and a biting vocal and then Wonderful Day, a slight more serious track and one which really captivated the entranced audience on this night, pared back but with lustre and finesse with the ever impressive Nigel Spaven and Stewart Hardy really coming to the fore. I know it’s a cliche to say all good things must come to an end but I really could have stayed in that cellar all night listening to these peerless performers go about their work, unfortunately The Way You Shine was the last offering they had to give us. A song that never made the cut of the first Maddison’s Thread album but one that fits this special setting perfectly. Life gets so convoluted and complicated at times that we forget that, at its simple best, it is a joy to behold. That night in Howy and Amanda’s cellar, that shall forever be known as The Rabbit Hole into perpetuity, was quite an uplifting and moving musical experience and one that shall stay with me for all my life. Music does not have to be complicated to be life-affirming and amazing and that night just emphasised this fact immensely.

All pictures are courtesy of the amazing Howy White.