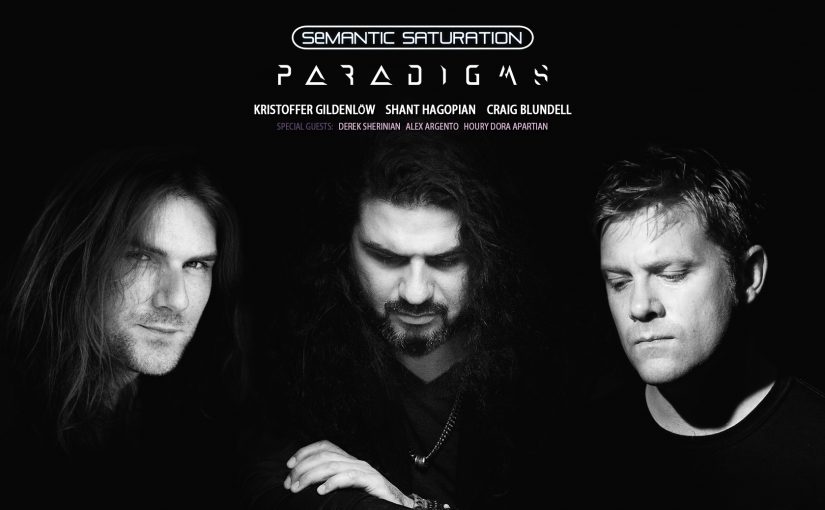 Does anybody remember Infectious Grooves?  The funk metal supergroup led by Suicidal Tendencies frontman Mike Muir released a completely bonkers album in 1991 called ‘The Plague That Makes Your Booty Move…It’s The Infectious Grooves.’ It was so out there it made my CD collection and I’ve yet to hear anything come close to that infectious energy that the album contained. After 5 years wait virtuoso guitarist Shant returns with the mind blowing ‘Paradigms’, this time aided and abetted by legendary musicians, drummer Craig Blundell and bassist Kristoffer Gildenlöw. The album also features guest musicians, some of the greatest names in metal, with Derek Sherinian returning to feature on the track Ulterior Harmony, Alex Argento on Carousel of Death and the lovely jazz vocalist Houry Dora Apartian on Empty Whisky Jar. As instrumental albums go ‘Paradigms’ is an absolute monster featuring such amazing tracks as the powerfully funkadelic opener Mirrors of Confusion and it’s identical twin Carousel of Death which are a real echo of that Infectious Grooves monster of 27 years previous. On the former, edgy, thunderous guitar combine with Blundell’s cacophony of drumbeats and Gildenlöw’s stylish bass drives all before it. It’s a grin inducing roller coaster ride and one you don’t want to get off. The latter takes you on an insane, acid jazz trip through a really warped mind where Alex Argento stands tall like a crazed professor.

The infectious grooves (see what I did there?) of Pareidolia give a moments pause of foot tapping energy before calm is finally restored with the elegance of Empty Whiskey Jar where Houry Dora Apartian adds her sultry jazz vocals.

The riffs and grooves come thick and fast almost giving you no pause to really appreciate the mind blowing musical structures and spellbinding melodies. Personal favourites are the intelligently constructed charm of Until We Meet Again, the otherworldly experience of Disturbance Within and the calm and collected polish of classic rocker Universal.

This magical experience is completed by Where Dreams Have Died, a ten minute journey that becomes Shant’s grand paradigm of musical intrigue and astounding mastery. It is an elaborate, baroque composition that trades on each musician’s undoubted skill and dexterity to deliver a sublime listening experience.

As the last note fades out a small but knowing smile appears on my face as I reminisce back to 1991. ‘Paradigms’ is a wonderfully complex and accomplished piece of work but, deep at its core this album is full of incredibly infectious grooves. Shant Hagopian and your stellar cast of musicians please take a bow for this fantastic achievement.