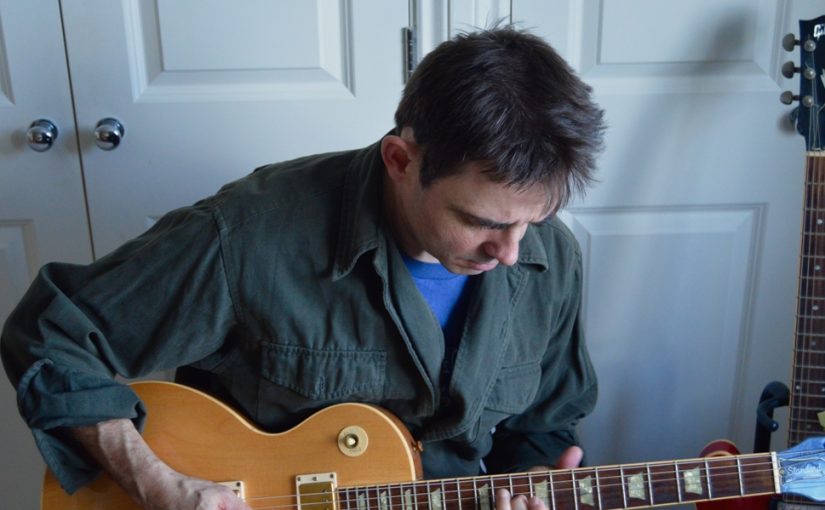 Meteorological Spring is in the air and there is a buzz around the Progressive music scene which is currently a veritable hive of activity.

Music in general has seen an influx of singer/songwriters, some more of the worker bee type, scattered like pollen among the genres and trying to stick to a secure career, whilst others clearly stand out from the crowd as prime males with honey sweet tunes fit to serenade a Queen, the two recent releases from Marc Atkinson and Lee Maddison being fine examples.

Into the honeycomb flies Alan Reed with sophomore album ‘Honey On The Razor’s Edge’ and this time there’s a grittier, more assertive edge reminiscent of his work with his previous band and with echoes of solo outings by a certain fellow Scotsman nearing the twilight years of his musical output.

I have to admit that whilst I like Alan’s first solo outing it felt like it didn’t have his full confidence and was maybe reflecting in his situation at that time. With this album there is no hesitance and it’s straight in with up-tempo rippling keyboards and electric riffs on first track My Sunlit Room. Alan sounds in fine fettle blowing away any faint concerns as his vocal pipes dance a highland fling through the melody in this rousing starter that crashes to an end. Now I mentioned another of Alan’s fellow countrymen and I have to say the main riff on Razor is very reminiscent of his output, but Alan adds his familiar style and harmonica flourishes (courtesy of  a certain Mr Steve Hackett no less), as he argues with himself and exorcises demons. There is a great video release of this track on YouTube to enhance your listening pleasure on which Alan shows he’s moving on not looking back. My inside sources tell me he may have had sore skin after filming numerous takes for the video. Ah, the sacrifices a man makes for his art.

Cross My Palm with silver and I’ll be only too happy to tell you this is a man who is not sitting on his laurels as he warns of treachery in the big smoke, but there’s no need to worry,  with some nifty guitar soloing from Jeff Green and the keyboard flourishes of Mike Stobbie building to a crescendo finish it’s another belter.

Notable for their relegation until now, up pop the familiar acoustic strings on Leaving (no cause for alarm, he’s not just yet) as vocals wrangle, with lovely female harmonies on the chorus, over a twisted relationship. Now I might be mistaken but ageing ears cannot distinguish whether this track is bolstered by the stunning sound of the one and only ‘Leode’ from none other than Lazuli’s Claude Leonetti or an Ebow, either way c’est formidable.

I must also point out that Alan has an enviable trio of fine female singers assisting him on this album in Magenta’s Christina Booth, Harvest’s Monique Van Der Kolk and Weendo’s Laetitia Chaudemanche adding the cream on top of some tracks here, giving him vocal riches beyond avarice. Not content to let the lady leave he begs she stay to the Other Side Of Morning, as he reasons with her over their differences and similarities, the good must surely out-way the bad times and Mike gets to bare the whites of his keyboards as stalwart drummer Scott Higham more than ably keeps the rhythm and beating heart of this track pumping, as he does throughout the album. This, the longest track on here builds to a fevered climax that is completed with one last gasping ‘stay’.

History lesson time, as this next track is about The Covenanter. Covenanters were Scottish Presbyterians who in 1638 signed the “National Covenant” to uphold the Presbyterian religion, and the “Solemn League and Covenant” of 1643 which was a treaty with the English Parliamentarians. The Covenanter’s made a stand for political and religious liberty that led to almost a century of persecution and their widespread migration to Ulster and the American colonies.

But their role in history was not as simple as that, as they were the children of the Protestant Reformation in Europe and sought to have the church of their belief, according to the Scriptures. Above all, there was but one Head of the Kirk – Jesus Christ, and they refused to accept the King in that role. From this opposition to the King all their troubles arose. Ushered in by the sounds of unrest, Alan protests with righteous indignation and berates the persecutors and liars throughout, casting light on Celtic roots at the heart of much of Alan’s musical heritage. Alan is a gifted poet and romanticist, with the ability to touch the hardest of hearts, as on the penultimate track, recalling a love lost who ‘looked at me, like I Used To Be Someone. With  a   beautiful instrumental introduction and beat me with a haggis if I’m wrong but it may just be flowing from the lovely ‘Leode’. Tinkling ivories and guitar loops sway like smitten lovers on the dance floor in time to Alan’s lyrics. For me he never sounds better than on tracks like this, as the emotion he injects into his voice feels so genuinely heartfelt. The music swells and the wonderful sound from the beginning floats in again before the vocals tug gently at the heartstrings one last time to float delicately away on fading notes.

Alan’s work may take him away from his homeland, but whilst you can take the wee laddie out of Scotland, you can’t take Scotland out of the man, as he looks to the Northern Light on the final offering of wistful musicality which midway through turns into an instrumental clash of clans before the keyboards kick thistles into the faces of the rest and triumphantly lead us out. This is an album through which threads of tartan tinged tunes dance a merry jig with modern rock forces, and Alan has surrounded himself with an array of accomplished musicians to enhance the tunes pushing him firmly to the fore among his peers. I mentioned a certain fellow Scot earlier and Alan’s physical stature may not match the  Big Man’s but this album proves he could well fill  upcoming vacant boots.

Having had the great pleasure of meeting Mr Reed a couple of times he is a most affable chap, always willing to take the time to chat. Whilst in conversation with one of his colleagues on this album,he was described as very difficult to work with, but it was said with a wry smile and bundles of affection, because that’s the effect he has on you.

Alan is one of the nice guys in this business and he deserves every success with ‘Honey On The Razor’s Edge’, it’s a braw album. Slange!

Buy ‘Honey On The Razor’s Edge’ from The Merch Desk