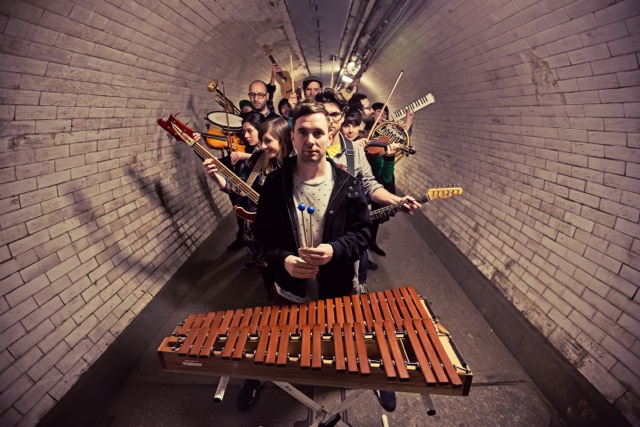 As ever our esteemed editor has an uncanny knack of being able to listen to the piles of albums he gets for review and then a few days later you’ll receive a message on Facebook with those immortal words ‘I reckon you’ll like this’ and, as I like a challenge and new music, I will always say ‘ping it over then’ and then usually ask for it to be re-sent as I forget to download it before the deadline runs out.

The latest of Martin’s picks that he thought would reach the parts that other records wouldn’t reach, is ‘Home’, the new album from Human Pyramids.

Brain child of Paul Russell, the Glasgow based composer from instrumental outfit Axes, this see’s him meld a chaotically brilliant fusion of orchestral arrangements, pop and electronic sensibilities, performed by a cross country collaboration 16 piece band.

Now I am a sucker for big ensemble sounds, and having heard the mighty sound that bands like the Polyphonic Spree or Bellowhead can make, that definitely got my spidey senses tingling, and with the band having performed at festivals like the End of the Road, 2000 Trees and Glastonbury, these guys have the chops to back up their ambitions, and ‘Home’ is their second release.

As an inquisitive teenager rifling through my parents record collection, and devouring anything they had that was slightly different (remember I grew up in the Britpop era where everyone sounded the same and there was nothing exciting musically happening) I discovered bands like ELO and Sky, who were using different compositional forms and sounds, and (certainly in the case of ELO) plenty of strings.

Thus I have always had a soft spot for ensembles that push beyond the four-piece sound and look to do something new and exciting. The fact that Louise starts off with some wonderfully stirring strings and then develops into a fantastic string and brass off (again being from South Yorkshire the stirring sound of the brass band runs through my veins like Henderson’s Relish, and there is nothing more uplifting than the sound of a brass ensemble going some). So to hear the two meeting in a fantastically stirring piece that mixes a great riff and some superb musical duelling/duetting certainly drew me straight in.

Canned Thunder does exactly what it says on the tin, with an absolutely brilliant drumbeat and more of that amazing brass. Paul Russell has an amazing ear for a melody and a knack for putting the right instrumentation in the right place, he makes it sound so easy, which is why this is such a well made album.

Slush mixes piano led riffs, some subtle electronica bubbling under the surface, and slowly the rest of the ensemble seep in, those driving strings, the heart tugging brass, the wonderful countermelodies.

The press blurb describes this as a mix of punk energy fused with electronic elements and orchestral sounds. I would say this is the musical sound of humanity, there is so much depth and power behind each song, that even in the quietest moments there are little riffs and licks, subtle string tones, a small brass part here and there, from the almost dance like infusion that ripples through Crackle Pop (reminiscent of Rob Dougan’s work) and the driving strings and powerful brass.

There is a country tinged sound to Your Flag, with a mellow and relaxed vibe that just builds as song grows and counter melodies weave and intermingle as the sinuous drum beat helps hold it all together until the brass kicks in for the massive elegiac finish that is full of power and emotion, reminiscent of the closing part to one of Mike Oldfield’s opus’. With the strong use of brass and shorter tunes it reminds me at times of the tunes of The Home Service or Bellowhead, and the intricate musical composition quality reminds me of Mike Oldfield in parts, but that is probably coincidental, as lets face it when you’re pulling music of this nature together with such a powerful ensemble you’re bound to get a touch of the Oldfield in there whether consciously or not.

This is no homage though, this is living breathing music, and the stuff that gets in your veins and into your soul, the driving power of Blast Off for instance is widescreen film music.

Nico is a wonderful uplifting piece of music full of life and light, whilst the closing Home rounds off a highly emotional and enjoyable album with some sublime piano work and another great brass section, bringing the album home.

I’d never heard of this ensemble before, and the description was vague enough to get me interested, and the music is sublime enough to keep me hooked and listening again and again.

This is one of those albums that ebbs and flows like life itself, and is full of emotional highs and lows, and above all the musicality, the sublime performances and the compositional chops on show here, this album is brimming full of heart and soul, and one you can’t help be swept away by as an aural emotional sucker punch.

This is what music is meant to be like, and this album deserves a place in everyone’s Home!

Human Pyramids, the explosive and uplifting project from Scottish composer Paul Russell of instrumental outfit Axes have announced their new album ‘Home’ released on the 10th of November via Three Mile Town Records.

The new album “Home” takes punk energy and fuses electronic elements with soaring orchestral arrangements performed by a 16 strong ensemble whose jubilant live shows have has seen them make appearances at End of the Road, 2000 Trees and Glastonbury festival.

Raised in an old mining village in the central belt of Scotland and now based in Glasgow, Paul Russell has now expanded his Human Pyramids project to feature a number of handpicked musicians spread throughout the UK. The collectives debut album “Planet Shhh!” received glowing reviews across national press, frequent BBC 6music plays and sound-tracked countless documentaries, films and adverts.

‘Home’ is a collection of 12 pieces of music written by Paul Russell, each one a stunning and winding musical experience, the record moving seamlessly across genre and sounds all the while held together by Russell’s distinctive compositional voice. He said about the record: “Since the humble beginnings of the debut album, the band has ballooned. Live shows at End of the Road, 2000 Trees and Glastonbury Festivals saw the addition of a choir and filled the stage with almost 50 people. Writing a follow up was always going to be an ambitious undertaking!”

Very much a celebration of collaboration, the album was supported by Creative Scotland, which allowed Paul to assemble his favourite musicians, arrangers and producers to work on the record, explaining: “I flew up Danish drummer Allan Gunby to track drums with Graeme Young at Chamber Studios. I recorded guitars with Rod Jones from Idlewild in his beautiful Post Electric Studios. Pete Harvey taught me how to arrange for string quartet and we recorded his ensemble with Paul Savage at Chem19. I took a ferry across to a remote peninsula in Cornwall to work with Simon Dobson on brass arrangements and recorded Trumpet, Tuba and French Horn at his Dark Matter Studios.”

Human Pyramids will be launching their new album with a release show at The Lexington in London on the 27th of October with the full 16 piece band in tow. 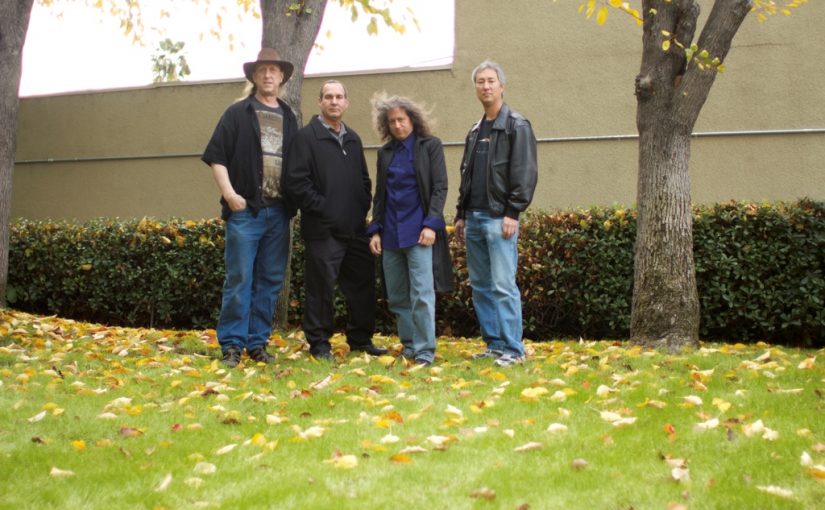