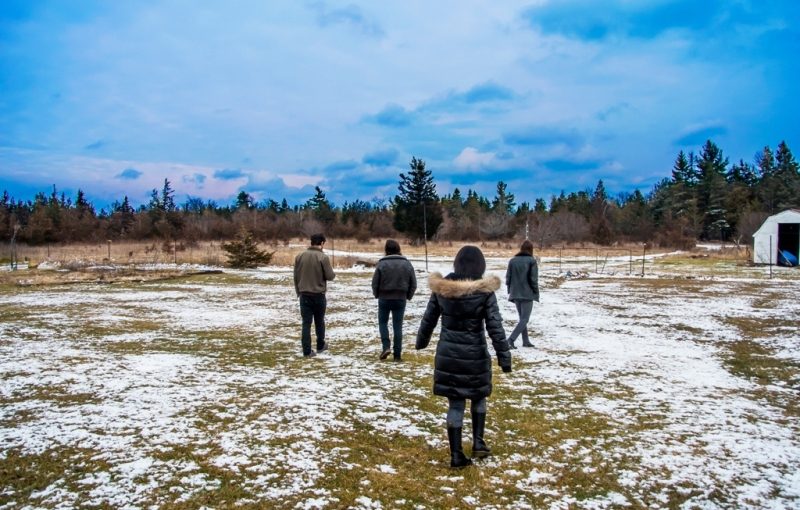 I have been listening to more laid back, contemplative music recently  and really enjoyed some great folk music as well but, every now and again, you need something to blow the cobwebs away.

“After a two year hiatus, Canadian melodic proggers Slyde are back with their new EP ‘Back Again’. Four tracks of intricate, contrapuntal technical prog-rock, the band’s new release is set to land on February 17. For fans of Haken, Coheed and Cambria, Rush, Dream Theater, etc, Slyde‘s music is driven by the clean vocals of frontman Nathan Da Silva and the powering keyboards of Sarah Westbrook; a beguiling fourpiece with an impressive return to form.”

Being a massive fan of Coheed and Cambria and Haken, that was enough to get me intrigued so I decided to delve into Slyde‘s new four track E.P. ‘Back Again’ and see whether the reality could live up to the promise. A concept EP, ‘Back Again’ continues to explore the links between environmentalism and the wider world, with a sci-fi twist. Following 2011’s EP ‘Feed The Machine’, which discussed the cyclical pattern of civilization between ‘The Machine’ and ‘The Consciousness’, and 2012’s EP ‘New World Sympathy’, which tackled oil industry and the injustices of mining companies, the new EP ‘Back Again’ traces a similar theme. Lead track Fading centres on the idea of extraterrestrial beings observing Earth and its civilization, but drawing back, due to humanity’s violent and destructive nature.  Similarly, the title track Back Again revolves around the Pale Blue Dot concept and the beauty of our world, which is often overlooked and uncherished by society. Fading gives no warning and no chance to catch your breath, the riff-heavy opening bars break into tight, if manic, and convoluted keyboard and guitar section before Nathan’s vocals join in and, yes, they do sound a lot like an early Coheed & Cambria but, trust me on this, that is no bad thing. Superb musicianship is at the fore here, just listen to the incredibly intense and intricate short-lived solo that rears up, incandescent and fiery before leaving you with seared eardrums. At times it almost verges on speed metal, such is the breakneck pace but it always has that progressive sensibility at the core. A visceral but incredibly enjoyable listening experience.

A nice 80’s synth inspired intro opens Join The Parade, a track that adds a funky, jazz feeling vibe to the technical wizardry. I really like Nathan Da Silva’s vocal delivery, it has a really unique sound, quite high pitched, that really fits the music. The musicians have turned down the intensity from 10, but only maybe to 8, and the vibe is more relaxed but only like a Tiger is relaxed if you sedate it. Powerful and intense instrumental sections show that this Canadian four piece are ploughing a not inconsiderable furrow with this new E.P. and their prowess is undeniable but what takes it up another notch is the intelligent songwriting which is entirely evident on this impressive track. A thunderously entertaining song, Divide hoves into view like some elemental behemoth with its forceful and energetic riffs and compelling drumbeats. Like the bastard offspring of a union between early Rush, Haken and Coheed & Cambria it consumes everything before it. The vocals are edgier and more authoritative and the brilliant interplay between keys and twin guitars on the solo in the middle of the track is genius. A track that is immediately accessible but has layers of intricacy, it really does demand repeated listens, just listen to the solemn piano led close out!

The title track is a much more subtle and cultured affair, almost mainstream in its delivery. Back Again is more complex than it would first appear. Insightful lyrics and Nathan’s wistful and contemplative vocal give it a nostalgic feel. The staccato, slightly offbeat rhythm is a nice touch and , as you get further into the song, the music begins to remind me of Iris by The Goo Goo Dolls but with a lot more complexity. This song has layers and layers of impressive multiplicity from the energetic drums to the refined bass playing and it is all held together by the notably imposing guitar playing and Nathan’s signature vocals. A really sophisticated and refined ending to the E.P.

Not just an epic heavy prog-fest, Slyde have delivered an intelligent and compelling 4-track E.P. that hints at much promise to come from this Canadian four piece. It’s on my i-pod for repeated listens and I can see it staying there for some time to come. ‘Back Again’ should be the catalyst that takes this impressive band on the next step to the recognition they truly deserve.