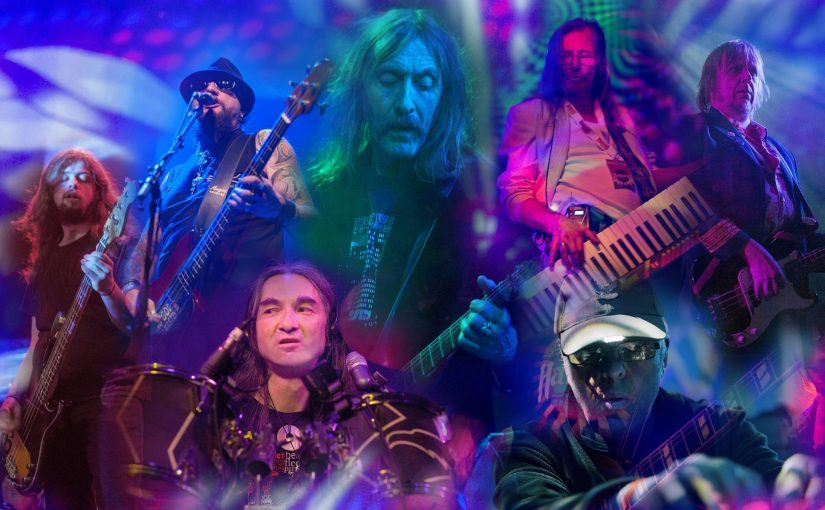 They have formed part of my musical DNA. An alien strand possibly, but a strand nevertheless.

I’ve been a technician on Space ship Hawkwind since hearing ‘In Search of Space’ back in time.

Whilst at college, we scoured second hand shops for copies of ‘Space Ritual’, fantasised about getting hold of a copy of ‘Captain Lockheed’, dreamed of seeing them live and snapped up bootleg cassettes at Record Fairs.

Over the years they remained a firm favourite; I bought albums on vinyl, saw them live (‘Chronicle of the Black Sword’ tour and at Reading Festival), upgraded the collection to CD and followed their musical journey as they ploughed their way through space and time.

That journey has now taken a trip into the universe of top 40 albums with ‘The Machine Stops’, based on a 100 year old dystopian fable written by EM Forster.

When  you are in the business of the future, 100 year old novellas seem counter intuitive  but the concept of humans living isolated from each other, communicating indirectly and having all their needs met by the ubiquitous machine is as relevant today as ever it was.

This relevance has struck a chord with the people that buy Hawkwind. Hard core fans (Hawknerds) have elevated the art of supporting the band to a new level, with communal weekends; events and building on the bands counter culture philosophies to construct their own world. A world that intersects with the “normal” one in the shape and fabric of this album.

And it’s a cracking piece of art. From the disturbing cover (David Lynch does Red Dwarf) you know that this is a serious concept album.

Luckily, the music is able to match the lofty concepts that the story evokes. If you’ve heard Hawkwind, you know what you’re going to hear. Synths burble, guitars and bass crackle and paint a vivid canvas for the lyrics to tell their story.

The album starts with a great little piece, All Hail The Machine that sets the bleak scene of the machine as benevolent dictator and god, satisfying all the protagonist’s needs. It evokes memories of the classic “sonic attack” piece from ‘Space Ritual’, with its angular narration and call and response coda.

We then rip into a Hugh Lloyd Langton style guitar riff and an up-tempo Hawk rock piece, simply titled The Machine

As with all dystopic tales, the status quo is soon in question, with the bleak reality being unveiled through the next hour.

The machine’s descent into erratic dysfunction and the effects on the people is told through the various tracks, using the entire musical palette that 40 years of invention can bring to bear.

You get post industrial percussive tracks that would give Test Dept a run for their money, those synths painting broad swaths of sound , crunchy guitars to please the Metal heads  , energy and attitude to satisfy the punks drawn to the anti establishment myth of Hawkwind.

They also were the forerunners of the Ambient and post rock movements , all of this goes in the mix , the end result is a fine album that sounds stunning, lyrics that were not scribbled on a fag packet  and a story worth the effort the band have spent in putting the package together.

The Hawkwind that made this album sits alongside the band that made ‘Levitation’, ‘Astounding Sounds’ and ‘Hawklords’ all of which still sound as good today as they did when first released.

The album is best consumed as a whole, either through a “real” hifi or good headphones. There are some fabulous details in this musical canvas that deserve the benefits of a good set of speakers, notably the gorgeous synth washes and chirrups in Katie, a nice little instrumental interlude that leads into King of The World, which utilises that great Eastern type vibe the Hawkwind developed with ‘Hassan’ / ‘Assassins of Allah’ on their legendary ‘Quark, Strangeness & Charm’ album, mixed with the driving mantra of ‘Psychedelic Warlords’. I’m referencing old Hawkwind in celebration of this new incarnation. It’s the band’s DNA reproducing itself down through the corridors of time. The echoes of great men departed are all over this album. Calvert, Lemmy, Dik Mik, Simon House, The Late Hugh Lloyd Langton all have helped shape this sound and it is more than the sum of its parts. In my Room shares a melodic opening with ‘Zarozinia from ‘Chronicles of The Black Sword’, another great Hawkwind literary album based on the ‘Elric Chronicles’ written by their long time fan / collaborator, Michael Moorcock.

As you may have picked up on, I’ m a bit of a SF fan and Hawkwind were always the most SF leaning of bands, followed by Blue Oyster Cult in my reckoning.

That post industrial percussive Test Dept feel is heard at the start of Thursday which also features founder and sole original member, Dave “The Captain” Brock steering Spaceship Hawkwind through this mid paced number splashed with artificial beats and hammerings echoing through the golden void.

In conclusion, this album sums up Hawkwind for the uninitiated without alienating the hard core Hawknerd fan. There are, as with all their recent albums, echoes of their past reverberating through the threads, but this adds to the feeling of “belonging” that it encourages.

The band has just completed a well received and visually spectacular UK tour with a stage show based around this album. The reviews have been great, I’m amazed at the love for a 40 year old institution that was always outside the norm and thrived in the space between.

Hawkwind, with this album have stopped being a shared secret cult and become an institution for all the right reasons.