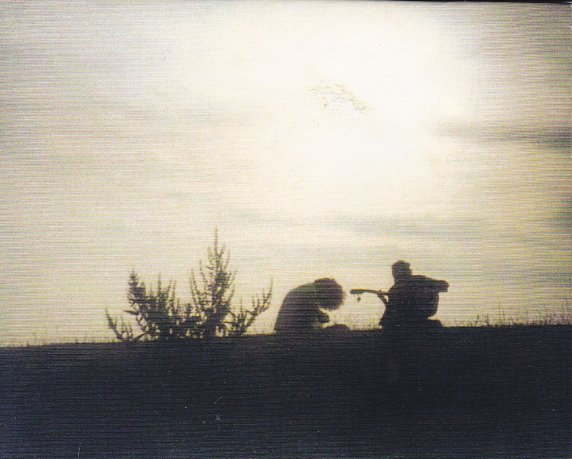 I abandoned, to a large extent, Progressive Rock in favour of bands like Eurythmics and China Crisis and then, later on, Prefab Sprout and Deacon Blue. But then it was a strange time for music – all that weird electronic synthesiser stuff, and the New Romantics. Prog was hiding in a cupboard, licking its wounds.

It was the age of MTV – video didn’t only kill the radio star, it dressed him up in a pastel suit with the sleeves pushed up, buried him and then danced on his grave.

This is important, because it goes some way to explain why Twice Bitten never achieved any real success – they were terminally untrendy in a decade where style was much more important than substance. Rog Patterson and Greg Smith met as philosophy students at Nottingham University. A shared love of 12-string guitars, a passion for real ale and a conspicuous absence of dress sense made it inevitable that they would form a band.

Somehow they combined their studies with playing hundreds of gigs around the country supporting bands in the Progressive Rock scene, but unsurprisingly commercial success eluded them and after nearly four years, a couple of independently-released cassette albums and a track on a compilation long player, they called it a day.

One of those cassette albums (1985’s ‘No Third Man’) makes up the bulk of this release – the 7 tracks of that album have been transferred from a cassette master tape into the binary world and cleaned up. I have to congratulate David Elliott for his efforts here – I think he has done a great job. The album’s opening track, Kingdom of the Blind, sets out Twice Bitten’s “heavy wood” stall for all to hear – a combination of staccato strumming and delicate picking on 12 string guitars.

Two of the songs really stand out for me, Swallowsong and Blue Sky Century – A pair of lovely songs, one with the bass very prominent as a lead instrument and the other a particularly gorgeous song with long vocal phrases over a delicate backing of 12 string guitars.

West End – the closing track on the original album, at just over 10.5 minutes, is covered with phasing, flanging, fuzzing and probably all manner of other electrickery as it tells its dystopian tale of surviving in the ruins of London. I like a bit of dystopia!

Special mention must be made of the album’s final track, the epic Crocus Point. Recorded in 2015 (because it took 30 years to get the 12 string guitars to stay in tune long enough to record the whole song) and mixed superbly by Kevin Feazey of The Fierce and The Dead fame. For eight minutes we are treated to some great 12 string work, with lots of delicious suspended chords and a gentle vocal line, and then suddenly all hell breaks loose as the electricity is turned on for an extended solo of great swooping curves before gradually calming down and drifting gently off into the sunset.

One of the things which surprises me about this album is how well it fills the soundstage of my living room, even though it‘s only two blokes with guitars. There are no keyboards or drums, and it is all the better for it.

Despite being very firmly rooted in the 1970s and stylistically very reminiscent of Anthony Phillips-era Genesis and Nigel Mazlyn Jones’ classic album ‘Ship to Shore’, there is a timeless quality to these songs which I really like. I could have listened to, and enjoyed, this album at any point in my life, it’s a shame I didn’t discover Twice Bitten until 2015. But ‘Late Cut’ from bandcamp I’ve been affected by music all my life – I still get shivers down my spine when I hear the intros to “I want to hold your hand” and “She loves you”, just as I did as a 4 year old when I first heard them.

For the last couple of years I have consciously decided to listen to full albums without skipping tracks. It is how the artists put them together. Last year I managed 687 albums (422 different ones) by 198 different artists.

My biggest musical regret is deciding to buy a textbook at university in 1977, rather than spending the money on a ticket to see Yes at Stafford Bingley Hall.

I’ve worked in IT since 1978, starting as a trainee computer operator, where I used to amuse myself by singing albums such as T’he Lamb lies down on Broadway’ from start to finish to while away the hours.