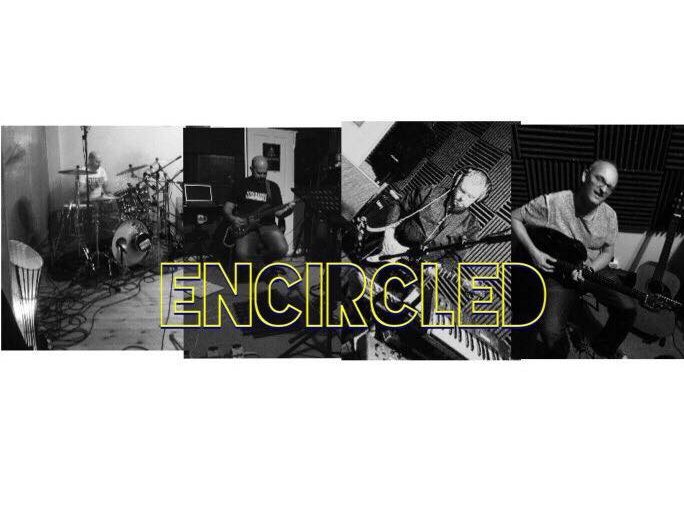 It’s always nice to be appreciated for things you do, to be recognised for contributions you make. So I felt quite chuffed when Scott Evans of the band Encircled contacted me direct and asked would I consider doing a lead review of their new upcoming album ‘The Monkey Jamboree’. The initial elation then moved to trepidation as I realised the band had entrusted their blood, sweat and tears to my hands (I’ll wash them afterwards) and what if I didn’t like it or thought it couldn’t match their previous output? Ah, the heavy weight of responsibility.

Scott sent me the files including the cover (from the talented fingers of Freya Evans) which immediately struck me that it could have been a cave painting featured in Planet of the Apes, with See no Evil,  Speak no Evil and Hear no Evil adorning the front. I mentioned this to Scott and he explained “It’s a little nod to us being deliberately ignorant in our music to all that is going on in the world, like the anti ‘FEAR‘, (Marillion‘s latest delicious release and castigation of the human race), which on listening to the CD bears similarities at times in the style of music.

For those that don’t know the band are:

With Backing Vocals and Flute from Kym Hart.

This is not an album to rock out to and you will not get whiplash from throwing shapes with your waist length hair (ignoring the balding patch on top), in fact it’s the perfect antidote to this time of year as the weather worsens, the nights close in and the temperature drops. Grab yourself a large glass of red or in my case a good  couple of fingers of single malt from the bottle on the table and close the shutters on the windows. Stoke the open fire in the hearth, dim the lighting and curl up on the sofa with a blanket. Slip the CD in the Hi-Fi and press play……

The short, understated title track soothes you in with Mark’s warm vocals as you take a large sip of the amber nectar and feel the glow as it slides down your throat. The gentle vocal harmonising between Mark and Kym relaxes you further into the cushions, the song trailing away on a lingering note. Echoing notes intro and the guitar and vocals convince you this is ‘Alphabetically Possible’, in the second track that has more than a whiff of the lighter side of  John Dexter Jones and Jump. Your toes will tap under the blanket to the beat of Stuart’s drums, as the shadows formed by the fire flutter on the ceiling above your swaying head. Listen to Gareth’s first solo, joined with Scott’s keys whilst you refill the emptied glass.

Close your eyes and ponder on the ‘Complexity’ and pace of life as you sink another shot. Decisions to make, he (or she) who hesitates…overrun, overlooked, forgotten, lost. The highs and lows, make the most of the good times as there’s always someone to take your place, on this really smooth track with some great laid back guitar work from Gareth.

Grab yourself another snifter, a glance at the fire sees the flames dance as the foot tapping starts again to ‘Stereochrome’s‘ funky little rhythm. Ruminate on the fact some people thrive on the modern pressures of life to the extent they can’t live without them, but not you at the moment. Recline and revel in the OMD like keyboard solo from Scott sliding into a Dr Who soundscape and ending on another fine guitar solo.

You begin to find the warmth of the whisky and heat from the fire quite soporific, lulled by the piano keys, make the most of this moment, this ‘Magic Hour’. Enjoy the soothing sounds of Rothery type fretwork, the gentle pulse of Stuart’s drums and Scott’s bass. Make the most of what you have now as everything must end, but maybe not until……

‘Tomorrow’ on the penultimate track which, after a few brief strummed chords, raises you from the reverie with a little more upbeat musing on the delicacy of relationships. Should we cling on or hold too close to be singed by the spluttering flames of a needy relationship? Treading on eggshells, will it fall apart acrimoniously and can we not stay friends? Just a little sip. You wake to find the room dark, only faint embers glow in the hearth and the temperature has cooled. Your head is filled with cotton wool as you survey the empty tumbler alongside the discharged bottle and try to piece together your thoughts on ‘A Life Shy of Perfection’. You rise, stretch then quell the remains of last night’s fire. Fold the blanket as you ponder what you have lost and how direction-less you have become. Make your way across the room and open the shutters on the grey streaked clouds of the winter morning as the last chords of acoustic guitar prod you to face the day ahead.

You pick up the glass and bottle then make your way from the room switching off the dimmed lighting and try ‘Chasing the Ghost’ in your fogged brain as you make your way along the hall. Pale, milky light drifts in through the glass panes of the front door casting a faint shadow ahead of you as you retreat toward the kitchen and the tune builds. Your bare feet drop the step into the kitchen, slapping on the chilled tiles. The shock makes you shake yourself in an attempt to disengage the monkey swinging from the branches of your brain. The bottle is discarded in the recycling bin and the glass shunted next to the pile of dishes by the sink from the day before. You’ll wash them later, no time now. You pause briefly to look out at the sodden leaf smothered garden before turning to retrace your steps down the hall and up the stairs for a shower as the last song nears the end in a duet of piano complemented by Kym’s flute. You close the bathroom door as the album ends on a single tintinnabulation. Time to get going.

This is not an album to break new ground nor will it have you dancing round the room. Tempo rarely breaking above a sway, it’s a slice of sublime relaxation, to kick off your shoes and relax to. It will keep me company on many a dark winter’s night and should it take your fancy as the tipple of choice, drink well of it’s smoothly distilled texture and feel the glow inside.

I’d like to thank Scott and the band for entrusting me with their latest blend and raise a glass to toast them, on an album well refined and produced by Shaun Lowe.

If you want to know more you can check out: