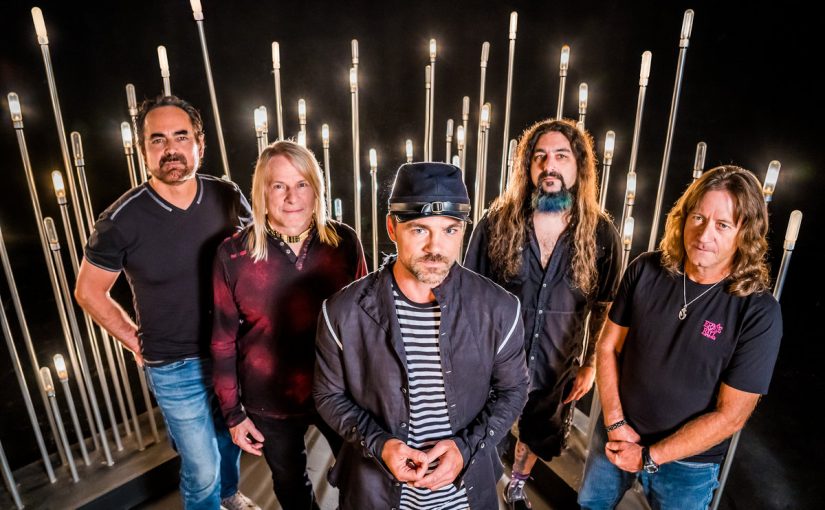 This latest Release from US Prog supergroup Flying Colors chronicles the final date of the ‘Third Stage’ tour that was wound up at Shepherd’s Bush Empire last December. This is a 2 CD and DVD package which really brings to life the spectacle and musicianship the band offer live with both audio and visual recordings of the evening presented.

Unsurprisingly, the set is heavily focused on the then current ‘Third Degree’ album but with enough familiar favourites to create a dynamic balanced show, although sadly no version of that album’s epic Last Train Home was performed (I would gladly have traded Mask Machine for that song) but, even so, what is really apparent is the definitive bass playing of Dave La Rue who anchors the material along with the driving drumbeat from Mike Portnoy. Together, these two offer a fabulous launch pad from which the others can fly their colors, as it were.

Steve Morse is on exceptional form throughout, he is all over these songs with riffs, solos and fills abounding. He also appears to be really enjoying himself, as do the others, the mix and sound is superb with great separation throughout making this a rocking and enjoyable listen. Certainly, those who were there that night sure witnessed something incredibly special indeed. Flying Colors aim of blending musicianship with great songs was realised that night as captured here on these discs and in the excellent DVD of the show.

Especially fine are the versions of Geronimo (which features some excellent bass riffs and a distinctively fine groove from La Rue), the beautiful and emotionally laden epic that is Peaceful Harbour (with an awesome guitar solo from Steve Morse and a fabulous vocal scat from Casey McPherson that leads the song in), this song really shows the marriage of styles that combine to make Flying Colors such a wonderful musical proposition. Songs with emotional depth, musically strong and yet whilst interesting, they really display the talents each member brings to the band. Considering that the band is supplementary to their main day jobs, this is all the more remarkable and is very rewarding indeed.

The fluidity of Steve Morse’s epic guitar playing really shines out on this song backed with real groove and drive from the others, creating a really special version of an exceptional song. This allows for some good audience participation, encouraged by Mike Portnoy acting as unofficial choir master. This joyful song really impresses greatly and is a defining moment of an excellent show.

The second half of the show on disc two contains mainly the longer songs, the band keeping the energy levels high throughout. Crawl is also another epic number, clocking in at 11 Minutes 48 seconds, opening gently and delicately before the chorus is played and a faster more intense pace is picked up. After the initial section, Neal Morse’s keyboards come to the fore, along with a great guitar line from Steve Morse offset against fine keyboards before the guitar snakes the piece away, backed by more great bass work. A seriously good grower of a song ensues here.

The dynamics of this song are truly awesome and highly impressive, really creating the mood. Casey is on particularly good form on this song and, indeed, on the whole set. In fact it is fair to say that each of these musicians are really playing excellently. You can tell just how much they enjoy being together playing together to make this music full of passion and emotion.

Next we have two lengthy tracks, Infinite Fire and Cosmic Symphony, back to back. An exceptionally fine progressive section lasting about 24 minutes in all and full of stellar musical moments from everyone. There’s great interplay, between Neal and Steve especially, backed with strong support from Dave and Mike. This section is followed, and concluded, by strong versions of The Storm and Mask Machine.

This set is really an excellent one and proves that Flying Colors have significant worth and bring a lot of value to the party. If only they could allocate more working time and tour properly so that folks could really begin to appreciate them more, they could be even more successful and reach a far bigger audience and market rather than being Prog’s greatest secret or guilty pleasure.

For me, this a most worthy release and consolidates the strength and value this this excellent band offer to progressive music or to folks who appreciate fine music and great songs. I have no hesitation in recommending this highly to all, seriously great release.