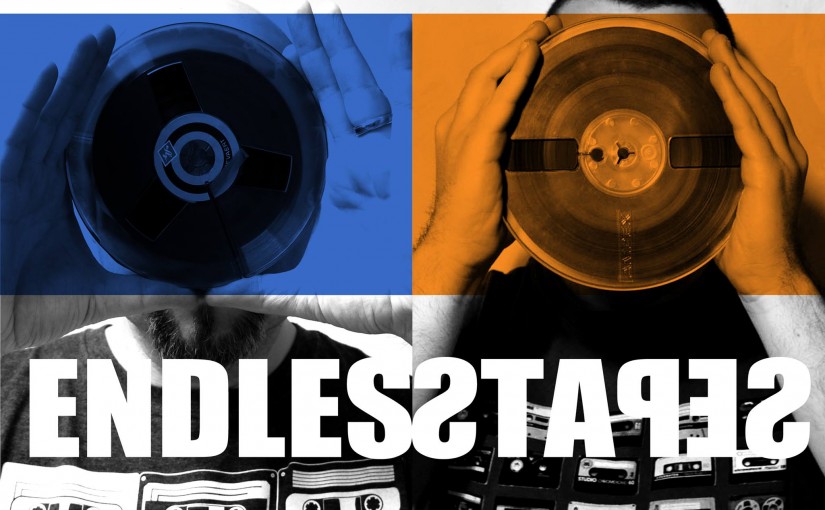 I’ve always been a sucker for great progressive instrumental album and a fan of great bass playing so, when I heard about Endless Tapes’ first full-length release ‘Brilliant Waves’, I knew there was a good chance I was going to be seriously interested.

I just love the way that instrumental music leaves your own imagination to fill in where vocals would have before. That’s not to say that these aren’t complete releases in the first place that are missing something, no, it just leaves my imagination free to interpret what the musicians have presented before me.

Setting out their plan for an immersive and engaging album, early 2014 saw Endless Tapes “road test” their nascent material over a series of well received live dates in Italy with the duo expanded to a full live four piece band in conjunction with stunning visualsby video artist Danilo Di Prizio. Opener and title track Brilliant Waves is a delightfully ethereal track that trips along without a care in the world. The gentle tinkle of the somewhat randomly placed piano notes leaves a feeling of intelligent, yet alien, curiosity in your mind. Its unhurried grace and calm demeanour let the subtle tension build gradually, yet the purity and innocence leave you in state of harmonious grace. Terminal 1 is more direct and agitated from the first note, the strident bass and discordant drums leaving you slightly on edge. It has a science fiction feel to the grating vocal and guitar note and keeps you in a slightly nervous frame of mind.

Another reflective and insightful introduction opens up Il Guardiano, the delicately strummed acoustic guitar leads your mind on a serene journey, the hushed vocal adding an idyllic feel. An alien, astringent note roughly pushes everything aside as it takes on a denser, more muscular feel. A sinister note makes your skin crawl in a deliciously creepy way. Hypnotic and mesmerising it powers on to a captivating conclusion. In keeping with the track title, Saturn has a real out of this world tone to it. The repeated guitar note and relatively off-cadenced anodyne drumbeat keep in a state of flux. A slightly uneasy, otherworldly vibe runs throughout, lulling you into a perceived state of mind. On the surface it is soporifically alluring but, underneath, some thing strange and incongruous lurks.

Bass Collapse is deep, complex and transcendental. The bass feels like it has hidden layers and labyrinthine depths to it with its ponderous, unhurried delivery. The notes seem to lay heavy on your mind, elaborate and compounded. It is not a track for the faint of heart, there is no light in its delivery, it is dark and convoluted and all the better for it. Immersive, slightly dissonant and a tad antagonistic, Possible Mission is another track that feels like it has hidden depths, there is some feeling of density to the music. Serious and sombre with an intelligence deep at its core, it appeals to the contemplative and thoughtful among music lovers and gives more with each repeated listen.

Private begins in an introspective fashion, mood music with a cinematic depth. It inspires a reflective and thoughtful state of mind, one in which you may be pondering the nature of the whole universe, such is the crucial and weighty tone. Stylish bass and drums with a spaced out synth note leave a melancholy air touched with sentiment and warmth. The closing track on the album Last Days invokes a feel of wistful yearning yet with an uneasy tone just below the surface. Trading uncertainty and a slight note of pessimism with optimistic guitar notes, it leaves a reflective trail across your soul. I found myself thinking of far eastern shores, the warm sun falling on my body but knowing that, soon, I would have to leave it all behind, the sad side of nostalgic memories.

An extremely well constructed and immersive soundscape that requires your full concentration to enjoy it to the full. It is an album that has hidden depths and you discover something new every time you listen to it.