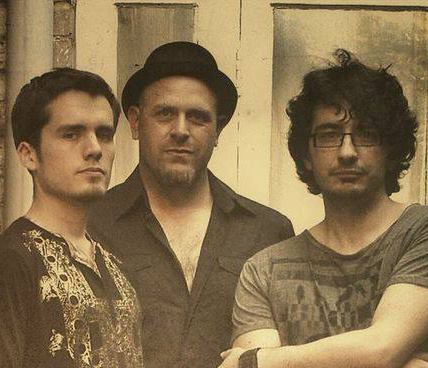 Listening to The Rube Goldberg Machine and I’m transported back to the halcyon days of the Summer of ’77. The energy and fizz on their debut takes me back to that much quoted “year zero” of music.

Which, in my humble opinion,was not a year, or even  two , but a gradual realisation that “punk” was a gimmick and the talented musicians were those producing “new wave” or  “post punk”. After the initial media “sturm und drang” of those naughty Sex Pistols boys being sweary on National TV , “Punk” became a tabloid fad.

Post Punk – where Mancunians discovering sequencers, New York loft dwellers discovering duelling guitars and Trustafarians in waiting discovering reggae.We were all touched by the “punk” paint. I grew up in Swindon. We had XTC ,they embodied this brave new world, mixing Punk energy with New York brittle guitar and dub bass lines. The Rube Goldberg Machine would have slotted between XTC and Television in my small but tasteful collection back then.

There are also some very Floyd / Porcupine Tree sounds here too, the title track has a very PT vibe, all jazz bass and restrained vocal, Roger meets Steven and they put the world to rights over the course of the track, managing to fit in a tasteful piano and guitar interlude, a solo and a coda with a very acoustic refrain which added another band to the list that they link to in my head– The Decemberists. This track could be fitted into ‘The Crane’s Wife’ set without a seam.

The next piece, In Symmetry, continues in this Folk / Prog vein, mined so well by The Decemberists.

Music does this to me. My head joins the dots between bands. I still think like a DJ / producer. If you like this track, then listen to these people. Bought that? Then you should proceed to this point and listen here.

Television influence the swirling twin guitar sound, all sinuous leads attacking and counterattacking each other.

The introduction of track 7 (Times Square), an instrumental tour de force of guitar layers  definitely makes me want to go and dig out my ‘Marquee Moon’ album, or to be more precise, Richard Lloyd’s post Television masterpiece ‘Fields Of Fire’:

Sorry about that. If the Wallet Emptier allows that clip, then you get the idea of where my head went whilst listening to the album…..

I’d detail more tracks but this is an album that plays as a whole, the mood and structure of the sounds entice you into their world, a bit bleak, a bit miserable seeming, but never dull, always guiding you through their labyrinth with atmosphere and melody.

As well as this Post Punk vibe, there are excellent vocal harmonies, a sprinkling of electronics and all wrapped in a clean mix that allows their stories told here to capture the listener and take you into the machine.

In the machine there is a Captain sat nursing a drink playing a card game which he wants to lose so he can blast off into space, he seems ambivalent about the quest but more concerned about his cards! The last track is not a million miles from Mr Chuckle Trousers in feel, a gorgeous melody with layers of cymbal thrashing behind the mix, all about a man afraid of “my own shadow”, scared of heights and being haunted by life in general .This is very HCE territory, but  those guitars weave a spell of almost Crimson intrigue. The track builds to an “epic” climax with the guitar taking up the  mantle and swopping and soaring.

Did he fly? Did he crash? You decide.

All the tracks are short, sharp shocks, none of this twenty minute epic school of thought here. KISS song writing – Keep It Simple, Stupid. Hooks abound, the songs feel that they will come across well live, there they can flex their wings and let it all go.

In conclusion, it is another fine album from Bad Elephant.

At this rate I may just send David Elliot a standing order. Is there a loyalty card? Do we get stickers?  A Panini album of BEM artists with a special scratch’ n’ sniff page for Tom?