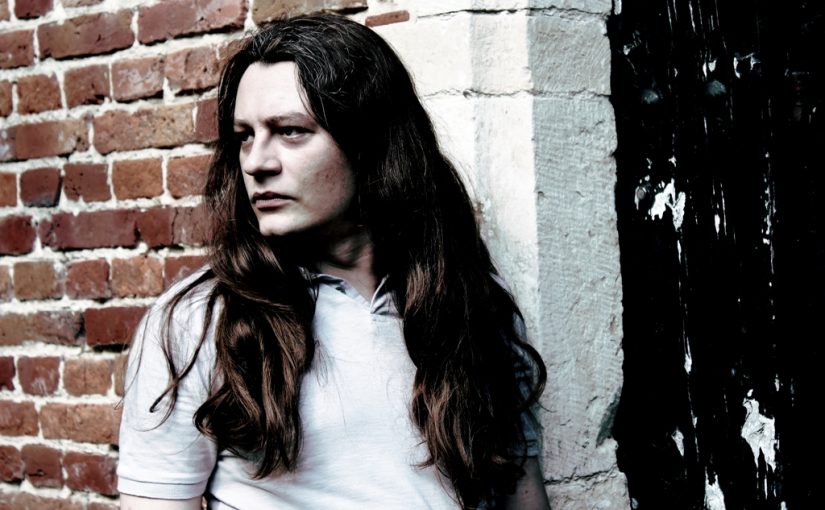 The review of this new release from avant-garde/art rock musician Hamlet’s Transport Aerian project has been a very difficult one to write. Hamlet is not afraid of talking and writing about difficult subjects and, in the case of ‘Therianthrope’, expressing his thoughts through his music.

‘Therianthrope’ is described as an album whose themes are dedicated to the emotions of the mind, torn by different assets of mental illness in the context of quickly developing world on the brink of the war, social and economical catastrophe. In the other worlds, it explores a twisted, ugly side of anyone of us in the modern world.

Not exactly warm and cuddly then? However music has always been there to explore all kinds of emotions and themes and it is how it does this that really matters.

The PR informations goes on to say:

“Besides the conventional music pieces, ‘Therianthrope’ also features The Abstract Symphony, a set of songs and instrumental pieces based on blind improvisation by the team of guest musicians. Nobody knew what the other musician would play, as they were only given a theme to describe and photographs to emphasize the visual in the sound. Such experimental approach is a manifest of modernity, an information field that contains the similar artistic concepts and thus allows any music to be created out of idea, without other forms of direct physical or intellectual interaction.” The mood is set by the dark opening track Smirking Sirens which has a grating rhythm and seems to feed on your nervous energy. The music is harsh and Hamlet’s vocals are as direct and accusatory as ever. This is the singular style that I have come to expect from this unique musician and it carries on with the next track Pitchfork Martyrs. There’s almost a funereal tone to the music, a dark but actually enjoyable dirge. I’m still on the fence with this album but it is beginning to grow on me, insinuating its darkened charms into my soul. Let You Never Perish and Destroy Me carry on with the obsidian, sombre mood. These are songs that are written to convey the depths of twisted, darkened human minds where depression and insanity are never far away but they do so in a captivating manner. You find yourself unable to turn away, almost like the old days of hiding behind the sofa but wanting to sneak a peak at the horror film showing on the TV. It is clever and intelligent songwriting that keeps you right in the middle of the story. The Abstract Symphony sections follow, woven through the standard tracks, and this sees such talented musicians as Marco Ragni, Peter Matuchniak, Rachel Bauer and Darren Brush join Hamlet in improvised sections of music where none of the musicians knew what the other was playing. It is a really ingenious way of creating music and left me intrigued as to what they would come up with.

I : Information Field and II: Saturate really stretch the listener, this is not music that you can lay back and let wash over you, it demands your attention but is never anything less than an absorbing listen. You will return to this album time and time again and come away with different impressions of these tracks, thought provoking and stimulating, they really do ask questions of you that you may not even want to answer. September appears like a light in the darkness, a veil lifted and a mind rescued from obfuscation. Hamlet’s vocals are intertwined with the more dulcet tones of Rachel Bauer and give the track the feel of an oasis in a sea of darkness, pain and confusion. Stefan Boeykens lead guitar is superb, however the ever present fog of confusion is never far away…

III: Lovemeat is another journey into the creative minds of the musicians and has a soundtrack atmosphere to it, like a quirky independent movie where you never quite know what is happening, tension and surprises at every turn. Hamlet is joined solely by Darren Brush’s Chapman Stick for the enigmatic and Delphian feeling Eternal Guilt, a powerful foray into madness and insanity in a musical form. A painful and harrowing listen but one which adds candour and honesty and a piece of music that had me on the edge of my seat and holding my breath throughout. The slow burning guitar solo is genius. IV: Poor Things Need ( A Common Interest) is another inventive slice of music that actually has a real laid back feel to it, almost a folk/roots music style. There’s still a fragility at the core, a feel that this is a rarely seen period of lucidity where a cry for help can be given and understood. Lions is beautifully melancholy and sombre, Hamlet’s vocal imparting a vulnerability that cries out for help. I find myself getting lost in the music and the lyrics, there’s no darkness here, just a raw and open candor and pain. Marco Ragni and Peter Mantuchniak add brillaint guitars that just help this song be as humanly honest as possible.

The last Abstract Symphony V: Immortals brings these great sections of music to a close with a real jazz infused feel. Layers of guitars, dulcimer, Chapman Stick and keyboards contribute to an abstract piece that, along with Rachel’s narration, connects with you at a very basic level, the music infusing itself into your very soul. This deeply passionate album comes to a close with Last Years of Peace, an atmospheric and involving experience that leaves you in a reflective and contemplative frame of mind. There’s an almost oriental note to the music with its mesmerising, hypnotic harmonies and I actually feel myself  relaxed and calm as it comes to a close.

‘Therianthrope’ is not intended to be an easy listening experience, it is a thought-provoking and sometimes actually quite raw and painful musical journey that should be consumed in one listen to understand and get the most from it. It is an intense and intensely satisfying record that proudly steps away from the expected to deliver one of 2017’s more engrossing and stimulating releases.