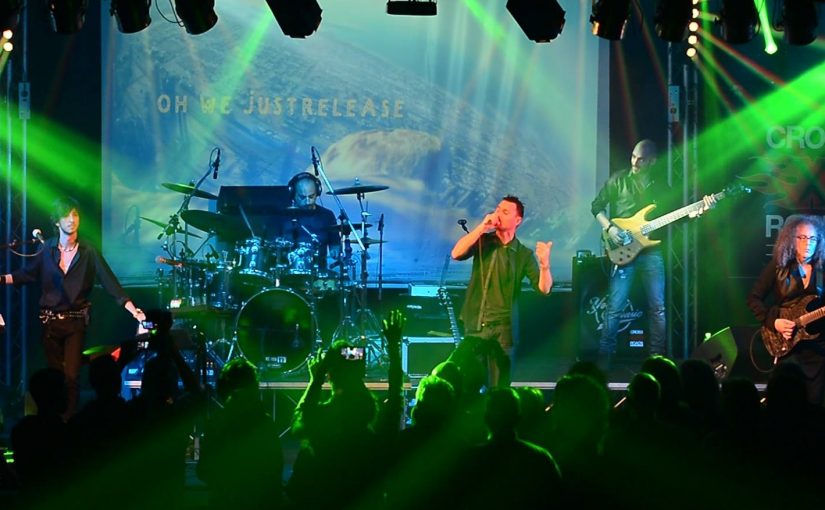 I discovered the talented Italian band The Barock Project after Nellie Pitts recommended their album ‘Skyline’ to me.

I took a gamble and sent her a postal order (or was it a cheque?). Anyway, the sound of young Mediterranean youth playing their hearts out soon won me over. They then upped the ante with an excellent live album, ‘Vivo‘. Live, they were even stronger, with some real power to their collective elbows.

They’ve now returned with their new album and it’s another quantum leap forward.

The old school vibe of the ‘Skyline’ project has been toughened up, the band are now firing on all six cylinders, and if the automotive metaphor was to be stretched to burst, this is a pole position worthy band ready to accelerate away from the pack.

I reviewed this after listening to it and conversing with a friend of the band as I listened, she was able to answer questions as they popped into my head-Amazing thing, technology.

Listening to Luca’s amazing piano playing, typing a query as I listen and someone hundreds of miles away answers it, the ultimate footnotes to the album. A new angle here, an interactive listening session

One example being my comments about that piano playing:-

And traces of Jools Holland piano on The The’s “Uncertain Smile”:

My “source” – “Oh he’s amazing, classically trained, you can tell, he’s a real pianist, not a computer geek who prods keys”.

I’ve listened again and the depth of musicality is being uncovered.

Track 3, Happy To See has a pure Jon Lord Hammond solo that is pitched perfectly before the guitars slice through with a very Steve Luthaker tight controlled solo with a hint of Francis Dunnery in the note bending climax

There are hints of the “not singing in my native tongue” in the closing part of the song, but the vocals are still enunciated beautifully and the instrumental canvas is a pleasure to lose yourself in.

My source filled me in on this too.

Luca, who writes, plays keyboards and produced the album also sang on all the tracks as in a Spinal Tap type “gardening accident” the band lost their vocalist and front man during the recording of this album. In the best Prog tradition, following in the footsteps of that short bloke from Genesis and that American drummer with the Italian name that now plays with the quintessential British Prog band, he stepped up, and knocked off an albums worth of vocal, as you do.

There is another vocalist on the album too, a Mr P. Jones, Esq. that many of you know from his appearances fronting the lovely Tiger Moth Tales and the noisier Red Bazaar.

All these multi talented people, gathered together on one album, the sum is even greater than the parts.

I must confess to “assisting” with the lyrics of one track, but my involvement was very peripheral, merely a view of the lyrics written out in English, I was happy to be of some use as the lyrical flow presented here is a credit to Luca’s resolve to “get it right” and sing in a natural way using a second language so yet another string to his bow!

One Day starts with some neo classical guitar figures, before switching to a 12 string sound, a real “classic Prog” vibe here, my initial point of reference was BJH, there is that element of lush pastoral beauty to the melody , the classical piano underpinning adds to the “feel”.

It’s the classical background that comes over here, with a splash of flute bouncing across harpsichord and yes, it does go a bit Jethro Tull in the middle eight, but in a good way.

Secret Therapy starts with Tablas and fast acoustic guitar runs, along with a grand piano, in fact the more you listen, the more instrumentation you find in the mix.

Production is lush and warm, none of that awful tinny drum heavy sound that blights much modern rock, no here we have a soundscape constructed by someone whose palette expands beyond drums, pro tools and auto tune.

Rescue Me is very poppy with a catchy little riff.

It Bites almost, or should I be referencing Frost* now?

I could go on, but the beauty of this album is that it encapsulates you in it’s own universe completely.

You want to listen all the way from start to finish without skipping a track.

There are some beautiful guitar parts too, nothing too flashy or show boating, but they flow organically with the songs, they’re not bolted on or shoehorned in as is the case with some material.

There’s some melodic underpinning of the songs from Francesco on bass that enables the instrumentation to spread out and fill the room.

I get the feeling that this album was made by a band of friends in a room all at the same time, the old school way.

The way Bob Dylan and the Band recorded the basement tapes – music made for the joy of making music together. Like that album, we are privileged that the creators wish us to share their world.

Buy ‘Detachment’ direct from the band.