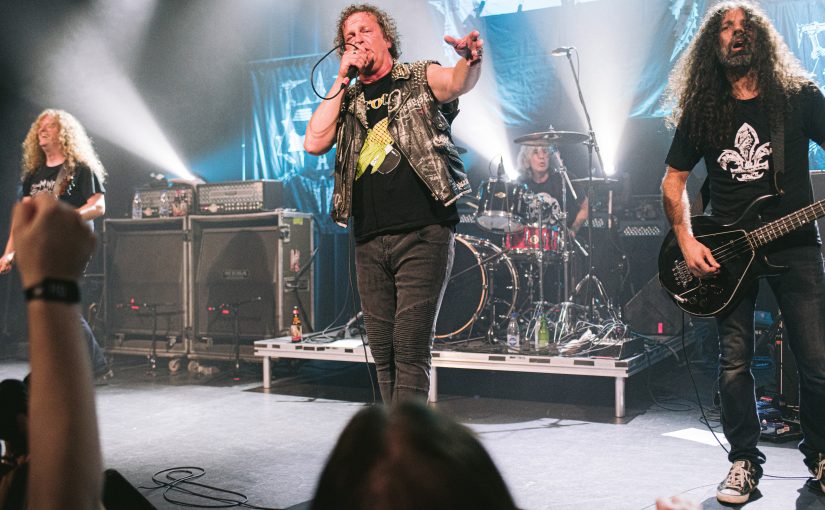 Very few bands survive for four decades. Even fewer are those that continue to reach new creative heights, long after legendary status has been achieved. Voivod were never like other bands: even as the thrash metal scene exploded in the early ‘80s, the Jonquière, Quebec crew stood apart, both as unique visionaries and as proud subverters of the metallic norm. From early prog-thrash classics like ‘Killing Technology‘ and ‘Dimension Hatröss‘ through to the psychedelic explorations of ‘The Outer Limits‘, Voivod have been standard-bearers for individuality and creative freedom for nearly 40 years.

I am a newcomer to the band and it was cult funny music pioneers The Fierce And The Dead’s guitarist Matt Stevens who first championed the band and brought them to my attention.

After many line up changes over the years, the band returned with 2018’s ‘The Wake‘ which was hailed as the finest Voivod album since the band’s late ‘80s heyday. An extraordinary, multi-faceted prog metal colossus, it confirmed that Voivod are currently enjoying a fresh surge of power and passion, even as they approach their 40th anniversary. Confirmation that the band’s return to peak form had struck a chord with fans old and new and, not surprisingly, Voivod duly hit the road to reaffirm their status as one of metal’s most unique and powerful live acts.

It was time for Voivod to unveil a brand new live album that deftly captures the kaleidoscopic, mutant adrenalin rush of the band’s shows. Following swiftly on from this year’s ‘The End Of Dormancy‘ EP, the new live set boasts a full Voivod show, bursting with old school classics and epic new material. ‘Lost Machine – Live‘ was captured at the esteemed Quebec City Summer Fest on July 13, 2019. Recorded and mixed by Francis Perron and mastered by Yannick St-Amand, it’s a vibrant and vivid snapshot of a band at the height of their powers.

As I have already said, I have little knowledge of the band’s material so decided to take this live release on it’s own merits and, let me say, it did not disappoint in any way, shape or form.

For me, live releases are generally either very good or very bad and ‘Lost Machine – Live‘ definitely falls into the first category, a thundering behemoth of an album that pulls no punches, kicks you in the balls and then runs off into the distance while laughing maniacally.

Audibly revelling in the shared chemistry that drives them forward, Voivod cover a huge amount of musical and historical ground during ‘Lost Machine – Live‘. From vociferously raw renditions of revered classics like Psychic Vacuum and Into My Hypercube through to the incendiary prog/punk metal insurgency of recent songs like Obsolete Beings, Post Society and Iconspiracy, it’s a monstrous and intoxicating and proof that Voivod are having more fun than ever right now. a massive highlight for me is the band’s legendary cover of Pink Floyd’s Astronomy Domine which seems to be revitalised with a rousing energy and chaotic wonder.

These are obviously the greatest of times for Voivod.

“I think the fact that we get along so well helps tremendously,” Drummer Michel ‘Away’ Langevin notes. “With Chewy and Rocky’s virtuosity, and Snake and I bringing in the old school punk thrash elements, the recipe is just working perfectly. We now have played many, many shows with this formation, so we are like a machine, both live and in studio. You know, many young kids are into Voivod and other thrash metal bands nowadays, and they usually sing along to the old and new material, they seem to appreciate the whole catalogue. We still have our old friends coming to see us too, so the shows have been really packed for us around the globe the last few years.”

Holy cow, that is one manic, exhilarating thrill ride that is definitely not for the faint of heart! Imbued with a restless and chaotic energy that never lets up for a second, Voivod have released a live album that deserves to be held up there with some of the best, now does someone have a quiet, darkened room I can go and sit in for a while…

Order direct from the band here: