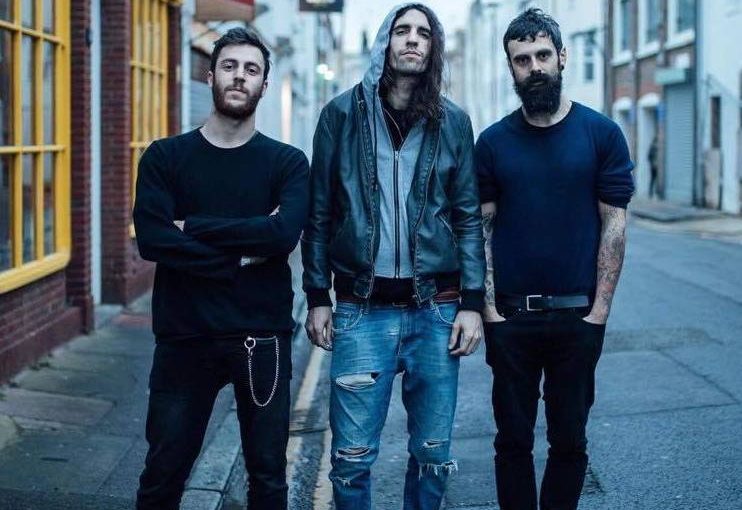 A shift of late has seen many bands classed under ‘heavy’ and ‘post/math rock’, expand their horizons and feel the need to spread their musical wings of experimentation. I have mentioned in previous reviews how easy it is to get lost in the masses and the difficulty facing up and coming bands in finding their unique selling point. The sound that will see them cut through the dense undergrowth of bands to the road leading in the direction of success.

One such band are Valerian Swing.

Emerging from the historic town of Corregio in the valley of Po, Italy, this intriguing trio first set out on their quest in 2011. Describing themselves as ”Three Italian lunatics playing mathy, violent, anthemic, and largely-instrumental songs”, does not really cover the full scale of their work and may discourage some. But if you like music that keeps trying to find new ways to express itself then you may want to give this a listen, as isn’t that what Progressive music is all about?

With the departure of bass guitarist Alan Ferioli the band currently line up as:

The introduction of Francesco to the fold has enabled them to expand and explore other musical areas and add to their previous sound. At the dawning of first track ‘A Leaf’, it’s clear the band are willing to experiment as the clicking of a percussive ‘cricket’ beats his sticks together and synthesised insects buzz around the speakers building to a pounding drum beat and catchy guitars. Everything floats on a creative breeze building to a cacophony of sound, which tugs at the last leaf on the tree. Buffeting and pulling at the single stalk from which it hangs, the curled cuticle, pigmented colour draining from green to copper brown dangles perilously for most of the day, until a gust of guitars snatches it away and across the sky.

Rising on thermals of digital key-work, the leaf is carried from the noises of the wood behind it swooping and swerving. Dipping and looping over countryside on through the night, it is driven by the instrumentation across the land and above the sea, where the wind suddenly tails off briefly as daylight rises. The leaf floats down to the deck of one of ‘Two Ships’ the large sails tacking to find the rising wind. The sails on the one carrying the band catch, billowing out and straining at their ropes tied fast to the masts, as both clippers race toward the coast like white ghosts on horsetails spray, crossing the finish line to distorted cheers from the crowd  lining the bay.

Cruising into dock the band leave the crew to moor up the winning vessel and disembark with their gear to the adulation of Stefano’s processed vocals and raise the trophy. ‘Three Keys’ are presented to them and it’s time to relax overnight, before mounting three of ‘Four Horses’ in the early hours (the fourth carrying their supplies) and riding from the port across the tracks stretched out before them. The keyboards set the rhythm with the thrum of Stefano and Francesco’s guitars on which they ride, the pounding drums from David raising dust beneath the hooves. In a couple of days they reach a city with ‘Five Walls’ as dusk beckons. Riding through it’s gates they are blanketed by the cosmopolitan sounds of digitised voices going about their daily business in the crowded city streets. Arriving at a compound in the western corner of the city they dismount, open three stables with the keys they received and unsaddle the horses. They take rest and sustenance in preparation for the next passage, whilst in the cool of the evening, festivities bring relief to the citizens, from the drudgery and heat of the day.

At dawn the band leave the city, walking, the ascending sun caressing their necks as ‘Six Feet’ set a fast tempo. Time is pressing and the musical terrain needs to be fully covered, they cannot afford to stumble or trip over frets.

The guitars scream to a halt as they look upward in a haze of feedback at the ‘Seven Cliffs’ before them. Care is needed as gentle notes and syncopated drum patterns mark the uneven ascent, one wrong or dropped note could cause disaster. But sure-footed they move with confidence then gain pace, with the elated guitars, drums and keys gaining footholds to reach the summit, collapsing on a dying line of feedback.

Exhausted but exhilarated the band rest, gaze out at the sounds of a new day being born. Food is produced from backpacks and fine beer to wash it down as they regale each other with tales of the journey. A bloated blood red sun ventures from the horizon, bathing everything in hues of pink and red. They watch as vermilion ripples across the sea, ribbon towards the base of the cliffs and they are satisfied.

It has taken ‘Eight Dawns’ to reach the conclusion of this varied album, full of passion, riffs and sublime technique. Cinematic, energetically varied even flirting on the edges of pop with their experimentation, in ‘Nights’, Valerian Swing have created their most accessible album to date and paved the way to what could be a bright future.

All three of these gentlemen are excellent musicians and work seamlessly together. It is not my way to normally favour anyone but on this occasion, I feel I must praise the power house on drums that is David Ferretti and state quite simply that he is ‘formidabile’.