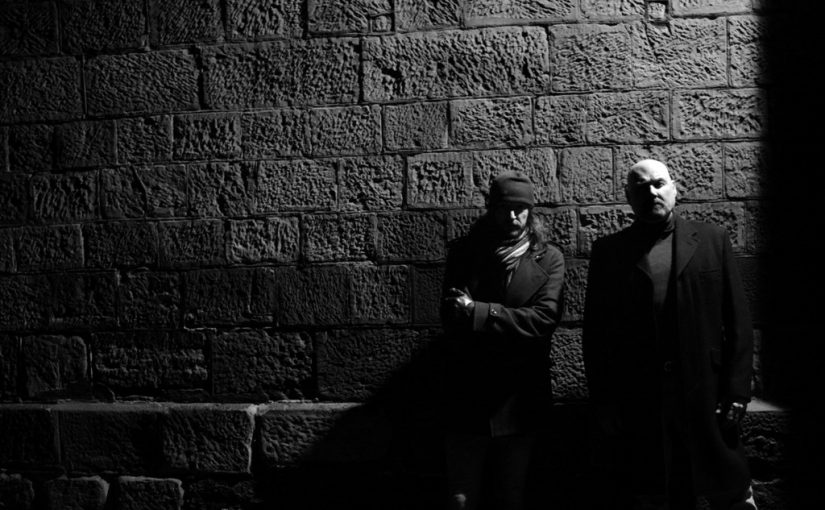 KingBathmat, now there’s a name for a Prog band if ever I’ve heard one, except they’re not really Prog, more hard-edged pyshchedelic/alternative rock but, there’s no getting away from it, it is a name that starts discussion and really sticks in the mind.

I’ve been a big fan of the band and the brains behind it, John Bassett, for a very long time and it’s been four long years since the release of their last masterpiece ‘Overcoming The Monster’ and it’s incredible songs. John has focused on his solo work under his own name, the Arcade Messiah moniker and, more recently, his great synth-wave project Sacred Ape.

So the time is ripe for the return of the seminal KingBathmat, albeit a slimmed down version. The band now consists of just John and drummer Bernie Smirnoff and 6-track mini-album ‘Dark Days’ was released on 30th June.

“KingBathmat now consists of only John Bassett & Drummer Bernie Smirnoff, tracks on the album were initially conceived in 2016 as a 2 piece side project, drums were recorded in Hastings Uk, and the rest of the music recorded and produced in Ireland over the last few months with John playing all the other instruments and fulfilling vocal duties.” A special nod goes out to the excellent artwork which has always been a hallmark of KingBathmat albums.

The album opens with the short but meaningful title track. Dark Days has an insistent opening that is sparse and pared back before John’s distinctive vocal opens up. There’s a feeling of treading water, waiting for something importatnt to happen but, from the first note, it is undoubtedly KingBathmat and the years roll back. Bernie’s considered drums and an elegant guitar note then add real atmosphere and layers of intrigue. It’s a track that seems to effortlessly wend its way into your psyche with it’s air of mystery and suspense and an excellent opening to this new record.

Tis Pity She’s A Whore (nope, not the same title as a track from the last Bowie album but a reference to a play from the 17th century called ‘Tis Pity She’s a Whore’ by John Ford) needs none of the previous tracks subtlety, it’s just a full on riff fest that starts with a piercing guitar note that could have come straight from ‘The Man Who Sold The World’ and then hits you right where it hurts with a sonically powerful riff and drums that could topple mountains. There’s a slight lull (not that it really matters) in the verse and then the monster chorus just takes it to yet another level of ferocity. This is what I was looking forward to, the dynamism, energy and sheer brutality of the music just takes your breath away but it’s done with intelligence and perception, psychedelic metal for the highbrow listener. KingBathmat are back!

We take a little step back again with Magnet To Pain, Bernie’s drums have a real energy to them but almost in a jazzy way and the bass playing in the background is superb. John’s vocal has a keening tone and, when the fuzzy riff kicks in, I’m transported to another decade. The guitar plying is very intense and heavy and yet seems slightly muted and in the background so as not to overwhelm everything. It’s a foot tapping, head nodding type of funky, intelligent heavy rock with psychedelic overtones, imagine The Red Hot Chilli Peppers jamming with Mastodon and you won’t be far off. How two guys can make a sound this big and expansive is beyond me.

The wistfully elegant guitar strumming at the start of Feathers gives the song a melancholy overtone and John’s vocal has a passion and devotion to it that adds a serious tone. Quite a sombre and downbeat track but one that has an fragile grace to it as well, the pensive, keening guitar just adding to that feel. This song puts me in a nostalgic and thoughtful mood, the music having a reflective and contemplative aura that draws you in. This shows the captivating and introspective side to KingBathmat’s music and songwriting, it is nine minutes of self retrospection and consideration and a superb track too.

The last track on this mini-album is Nihilist which opens with a mariachi style guitar, laid back, unhurried and undemanding and the song takes it’s cue from this. The vocals seem to wander into the song without a care in the world and it is Bernie’s drumming that gives the track some substance to build on. I like the chilled out atmosphere, almost ethereal in feel and the wistful air that seems to settle all around you. It’s a stylish and classy piece of music that seems to just meander across you aural synapses and the guitar playing is refined and tasteful. Half way through the pace increases and an almost frenetic note begins to seep into the drums and guitar as John and Bernie go into what seems to be an extended jam session, a bloody good one actually. They play off each other almost to the end of the track when John’s plaintive vocal returns and takes us to a thoughtful close.

KingBathmat have returned with a glorious slab of psychedelic prog/metal that takes the sound that people have come to love and gives it a harder edge and incredible nuances to create something quite unique. A superb listening experience and one that leaves this reviewer wanting more, John Bassett is one of the most creative musicians we have and joining forces with his old partner in crime has given him something extra, highly recommended.