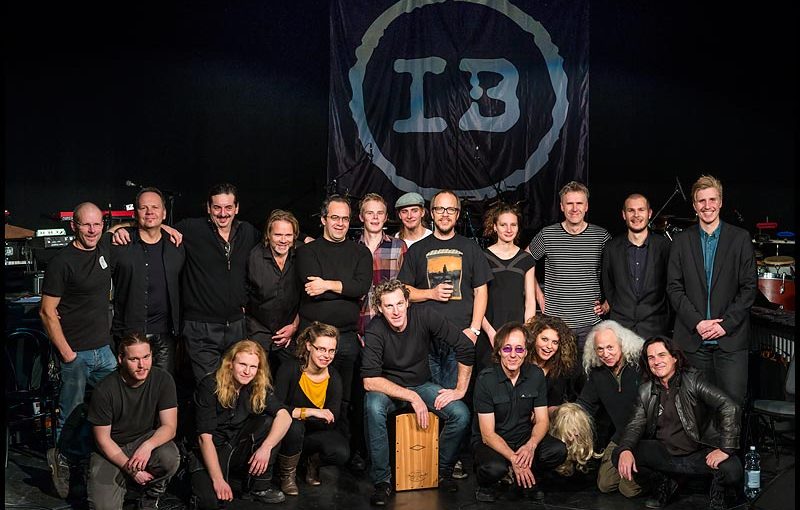 I confess I have never heard of Isildurs Bane before, and yet the Swedish band have been going since the 1976, well renowned for their complex music and their own festival known as the IB Expo. It was at one of these expo’s where Steve Hogarth guested that they invited him to record an album with them.

We should all be grateful that he said yes.

Having been known for the past 30 years as the voice of Marillion, let’s not forget that Hogarth has a strong musical pedigree outside of Marillion, firstly with How We Live, and their seminal album ‘Dry Land‘ (reissued, ripe for reappraisal on Esoteric last year) and of course his solo projects, of which both ‘Ice Cream Genius’ and the collaboration with Richard Barbieri, ‘Not the Weapon but the Hand’ are prime examples of his versatility.

Stepping outside of his musical comfort zone see’s Hogarth in surprisingly strong form, his powerful and distinctive vocals dominate this album, whilst the musical prowess and ingenuity of Isildurs Bane weave an amazing sonic tapestry for him to work his magic.

I thought H was at his finest on last years ‘F.E.A.R‘, I was wrong.

This is the strongest I have heard him for years, and working with different musicians has brought something totally different to his songwriting.

The approach taken by main man Matts Johannson on keyboards with composition is to focus on the music and let H bring the vocals, and as approaches go, it’s one that works perfectly.

H sounds like he has free rein to go where the music takes him, and a band with as broad a palette as Isildurs Bane gives him plenty of space and scope to get there.

This album clocks in at 41 minutes, with 6 tracks, and not one moment is wasted, not one lyric feels out of place. Whilst the music veers from contemporary rock, to atmospheric sounds, folk elements, jazz, stabs of brass and strings, pulling together a diverse and eclectic sound to a coherent whole.

This is a song cycle, not a concept but a collection of songs around the same theme, life and love, all delivered with poetry and passion by H all underpinned by the musical dexterity of Isildurs Bane.

From the opening Ice Pop (from which the title is derived) and the lyrical phrase ‘Up, down, Left right’ which doesn’t sound the most inspiring, but which returns later on, the song flows beautifully into The Random Fires, as the lyrics and music flow conceptually and powerfully.

Peripheral Vision, features some of the most atmospheric music on the album, allowing Hogarth to sound his most wistful, and by golly his range is apparent on this record, from rock to ballads, and half whispered vocals to full on power, he sounds like a man reborn. He sounds like he is relishing this challenge, and by stepping outside of the Marillion bubble he has really pushed himself, and the results are an absolute joy to behold. The longest track on the album, The Love and the Affair, with it’s list of day to day things that love does (pushes the children on the swing etc) and it’s counter reaction to the mundanety of these acts, reflects musically the impact of what looking outside of the established relationship does in one of the most powerful tracks on the album.

I know that on albums like this the singer is also the actor, placing themselves in the protagonists role, but if H hasn’t had any experience of the devastation an affair can have, then by God he deserves an Oscar.

Musically the band tone it down for Diamonds and Amnesia, with its chamber music accompaniment, and more of H’s low key vocals is a precursor to what I think is the strongest tracks on the album, and if there were such a thing, the hit single from the album.

Starting where the first track started, spoken word vocals, almost a confession or a life plan, and those lyrics again ‘Left Right, Up Down’ and some fantastically insistent music from the band, H’s lyrics are almost an instruction ‘Watch carefully’ he instructs and as the band blasts into some fantastic musical interludes, Incandescent pulls the finest points of this album together, as Klas Assarssons vibraphones and marimbas dance under the track and build and build to an astonishing crescendo as the Axel Crone’s brass section blasts through the air, and H echoes round the musical maelstrom.

The mighty musical work of this band is sublime, and the way all the musicians intertwine to create 6 songs that allow Steve Hogarth to stamp his presence on them is a testament to both parties vision.

This a wonderfully vibrant collaboration and one that shows what happens when two parties working in slightly different spectrums bring their joint vision to bear on the music.

Having worked with Marillion and now Isildurs Bane, it wouldn’t surprise me to see Steve Hogarth with Gandalfs Fist next.

Seriously though this is a mighty powerful album, one that sounds fresh, contemporary and timeless. One that could well be up there as an album of the year, and who said you can’t teach old progs new tricks?

Buy ‘Colours Not Found In Nature’ from Burning Shed