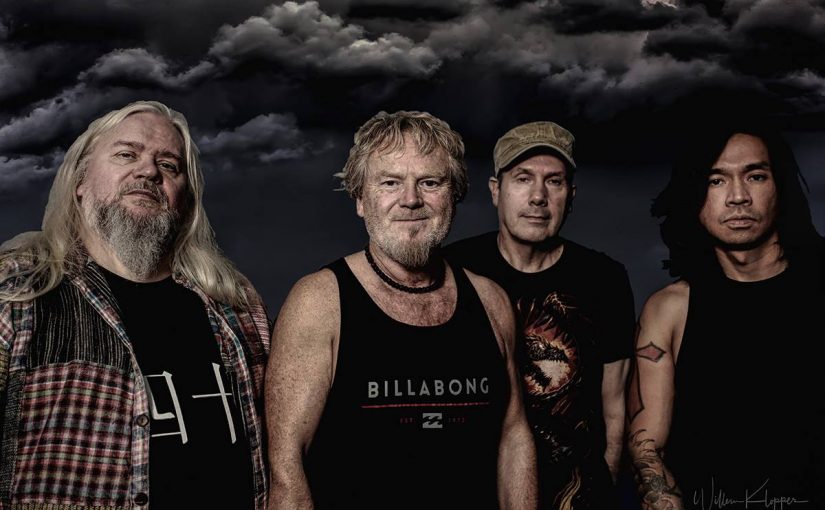 “Music in the soul can be heard by the universe.” ― Lao Tzu

Let’s face it, I listen to a lot of music, A LOT!, on a daily basis and, not to say I get jaded but it takes something really special nowadays to really blow me away.

The new album from legendary progressive rock luminaries Pendragon came with an absurd amount of hype but that’s what happens when you have been around since 1978, even I didn’t turn 11 until 1978!

Well the fantastic album artwork promised untold riches beneath and, boy, did these guys really deliver with “Love Over Fear”, sixty-five minutes of pure musical drama and utter bliss. It truly is THE listening experience of the last year by quite a considerable margin and with every listen this glorious collection of magical moments continues its journey to the peak of musical nirvana.

Am I being a tad over effusive with my praise? We all know opinions about music can only ever be subjective but I have listened to literally thousands of albums in the last 40 years and, to me, “Love Over Fear” is in the top three albums I have ever listened to, yes, I did just say that!

I’m still not sure whether the Genesis reunion tour is a good idea or not but they were a superb band in their heyday and I have to scratch my head in disbelief that Pendragon never attained even a small percentage of their success when they can write, record and deliver an album of such high quality as this?

Emotion, passion, power, grace, empathy, sentiment, pomp and circumstance, these hugely impressive and talented musicians deliver it all across ten songs that shine brightly with their sheer brilliance.

There is a three disc version that has the original album plus an acoustic and an instrumental version but, surprise, surprise, I bought the vinyl which is a thing of sheer beauty and a sublime listening experience.

The album opens with the power of Everything, an in your face blast of keyboards, guitar, bass and drums which grabs your attention immediately before effortlessly moving into the wonderment of Starfish And The Moon, a beguiling and bewitching song where the focus is on Nick Barrett’s mightily impressive vocal performance. Two songs in and the skill level of these musicians is already obvious as you are drawn into their evocative world.

Truth And Lies is an absolute classic in the making, an intelligently constructed track that weaves a magical spell in your mind leaving you on the edge of your seat in anticipation before breaking out majestically into a powerful symphonic prog masterpiece with an utterly compelling guitar solo by Nick. The rhythm section of Peter Gee and Jan Vincent Velazco provide the foundations and Clive Nolan’s elegant keyboards the added layers of class. The bright and breezy 360 Degrees sees Pendragon go all folk on us and is a track full of joy and bonhomie that will have you singing along at the top of your voice and leave you with a big grin on your face with its addictive chorus and rhythm.

Next along comes the shimmering charm and refinement of Soul And The Sea, a graceful composition where ethereal strings and Clive’s superb keyboards combine effortlessly before the track breaks open with an uplifting guitar riff and a dynamic rhythm section to deliver grandeur and splendour. One of my personal favourites in an album full of excellence is the scintillating radiance of Eternal Light. Once again the band have created a wonderful journey composed of epic components that combine together to deliver something quite wondrous, the inspiring chorus is just divine and transcendent. Every time I come away from this song feeling overwhelmed with joy and exultation.

Water is as uber cool, insouciant and laid back as they come, the free and easy feeling that the song engenders is utterly hypnotic and truly habit forming. Nick’s vocals glide along without an apparent care in the world and the music gives the song a properly jazzy aura, pure class. Wistful, contemplative and nostalgic, that just about sums up the sumptuously refined tones of Whirlwind, lose yourself in its gentle embrace for five minutes and forget about the world.

You want power, pomp and circumstance? Then listen to the intense magnificence of Who Really Are We? A song that epitomises what a truly dynamic progressive rock track should be all about. Clive’s keyboards fire warning shots all over the place, Nick’s guitar answers them with some primeval riffs and Peter and Jan provide upstanding backing. The vocals are direct and potent delivering a perfect statement of intent, an utterly compulsive and immersive drama. Sadly, the time has flown and we are at the end of this prodigious achievement as the album closes out with the thoughtful and slightly melancholic Afraid Of Everything which finishes with a delightful, thought provoking instrumental section.

Intelligent and insightful lyrics and four musicians at the very top of their game are great ingredients to have when you create a new album, however Pendragon have added a dash of magic that is rarely seen in modern music nowadays. There is no such thing as the perfect record, musicians are always striving to concoct something better than has gone before but “Love Over Fear” is as close to perfection that you can get, the best album of the last twenty years in fact and, in my humble opinion, and that is a very rare beast indeed!

Order “Love Over Fear” in any of its many guises from The Merch Desk: