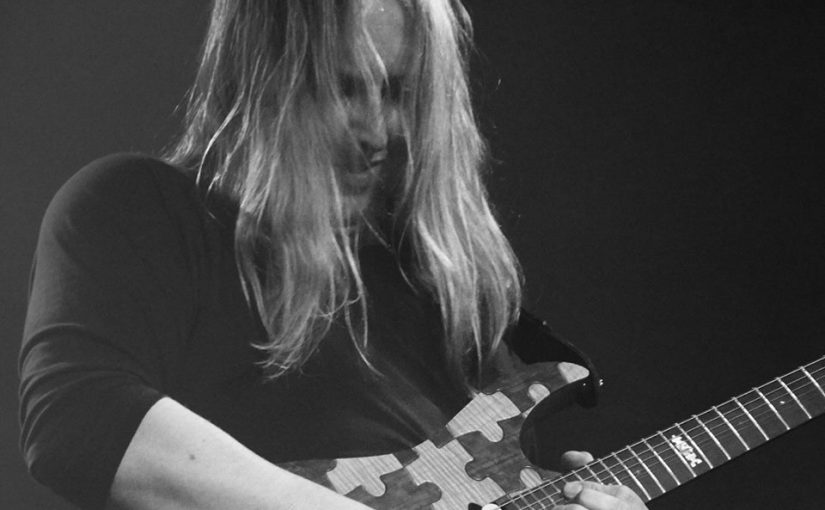 “For the virtuoso, musical works are in fact nothing but tragic and moving materializations of his emotions; he is called upon to make them speak, weep, sing and sigh, to recreate them in accordance with his own consciousness. In this way he, like the composer, is a creator, for he must have within himself those passions that he wishes to bring so intensely to life.”
― Franz Liszt

‘Virtuoso’ is quite an honorific and Dave Foster would probably hate me calling him this for he is an unassuming and humble man who just happens to be a stunning guitar player. He can make the instrument come alive and even talk to you and, if that is not what being a virtuoso is all about, then I don’t know what is!

Dave is probably better known as the guitarist from the bands Mr So & So and Panic Room and for being Steve Rothery’s foil in the great man’s solo band. Never being in the spotlight but being a purveyor of intense guitar licks, solos and riffs that have gained him renown in the world of those in the know. His first solo album ‘Gravity’ was released in August 2011 and I was suitably impressed with its mainly instrumental songs that were performed with more than a tongue-in-cheek hint of Joe Satriani or Steve Vai extravagance.

The press release for Dave’s second solo release tells us we have something different in store:

” ‘Dreamless’ follows his first solo release ‘Gravity’ from 2010, although as Gravity was a largely instrumental album, ‘Dreamless’ is, for the most part, made up of ‘songs’, with guest appearances by vocalists Anne Marie Helder (Panic Room/Mostly Autumn) and Dinet Poortman (NOONe) and Dave also sings a few tracks himself.

Antonio Seijas has provided the artwork and, as with all his work (including ‘Dreamless’), the cover is stunning. The album has been produced by Dave and long time recording partner Al Unsworth and the album has been gorgeously mixed by Al. So, what has this influential and distinguished musician got in store for us? ‘Dreamless’ is a cornucopia of musical delights, mixing styles and moods effortlessly.

The opening two tracks Cabello and Amitriptyline have a grown up and mature feel, they are songs with more than a touch of classic rock to them (Amitriptyline even has a punky tone to it), sharp-suited and super-smooth. Dave’s guitar is distinctive in sound and intonation and drives these two pieces along at a steady pace. Dinet Poortman has a great voice, full of emotion and lustre and it drips class. The rhythm section does what all great rhythm sections do, holds a steady course without being intrusive. The songs are well written and well crafted and, while adding nothing new, they are delivered with such finesse and artistry that they are going to be distinct anyway. The first song denies us a classic Dave Foster solo but the second follows that up in spades!

Sandwiching the dark and dangerous Black Sunrise (we’ll get to that soon) are the twin delights of New York Rain and Lingering with their wistful and winsome appeal. Vocals that have more than a hint of folkyness to them are ably abetted by Dave’s guitar which is delicate, organic and even slightly ethereal. If you’ve heard Neal Schon’s solo release ‘Beyond The Thunder’ then you’ll know what I mean. Intended or not, I really get a feel of paring back and returning to nature on these two beautiful songs. Dinet’s voice has a light tone of Joni Mitchell in places, just a gentle catch here and there and it really plays on your mood lifting you to an impossible high with its clarity and refinement. On New York Rain the subtle elegance of Jonatham Edward’s piano and Charlotte Evans’ exquisite backing vocals give a haunting grace and Riccardo Romano adds his tasteful keys to Lingering. Hazy summer days and nostalgic longings abound around both of these refined songs and they are a lingering light of hope in any darkness.

So dark, dangerous and seriously moody, yep, that’s the epic Black Sunrise, a monster of a track hewn from the granite of musical ambition. There’s a mysterious feel around the whole song, the vocals have an enigmatic ease to them and the guitars are decidedly heavy. It starts as a brooding beast that you know is building up to something cryptic and in your face. The monolithic chorus, massive riffs and in your face vocals, are brilliant but, if there is one thing that raises this track well above the norm, it is the enormously incandescent solo that springs from Mr Foster’s guitar, not once but bloody twice, quite superb. The stylistic mood changes continue with title track Dreamless which begins with a touch of middle-eastern promise before opening up into another smoothly delivered classic rock piece. Dave provides vocals on this song and he shows he has a talent for singing too. A slow building track that opens up with flashes of urbane, harmonised backing vocals and some rakish riffs to give a slight Floyd feel in places. A staccato, off-kilter solo  jabs at you to deliver the killer blow. Simple, pared back and gossamer light in texture and delivery, You Have No New Messages uses the twin talents of Dina and Dave to give you a moment of calm in the maelstrom around you. Three minutes of absolute elegance and grace, it calms the soul and lightens the heart.

Ache returns to that ominous, brooding tone and introduces Matty Cohen and Steve Rothery to the fray. A slow, involving number with Dave and Dinet sharing vocals, there is a yearning and longing at the core of its intensity. Taking a more progressive and convoluted route to your mind, the heart of this intricate track is the profound and intense solo that takes a serpentine route across your synapses. A song that leaves a sense of profound loss as it comes to a close. Brahma sees AnneMarie Helder take over vocal duties and has an almost flamenco style guitar opening before her deep and meaningful voice takes over. I like its profound atmosphere and prog-tinged classic rock notes. Clever songwriting invokes a palpable sense of profound anticipation running throughout that keeps you on edge and, when Dave turns into rock-god mode and  lets loose with a scorching solo, it is with a feeling of extreme relief. Another piece of refined brilliance, Counting Clouds is all acoustic guitars, humble vocals and a peaceful easy feeling that permeates all. Ann-Marie and Dave trade vocals with aplomb and harmonise delightfully to create an aura of west-coast joi-de-vivre that wouldn’t have been out of place on an Eagles or Crosby, Stills and Nash release. The guitars are used to compliment the tone and there is an utter feeling of contentedness and completeness as it comes to a close. Our journey through the differing colours and emotions of Dave’s mind finishes with the obscure wonderment of Morphine Sleep. Seven minutes of differing soundscapes with a cinematic feel that is performed in its entirety by Dave himself. There’s a hunger and passionate longing in the sparse delivery of the guitar and a humble aspiration as it offers itself up for your delectation. It demands your rapt attention and you give it willingly as this wide variety of musical personalities and characters comes to a close.

The usually modest and self-effacing Dave Foster has stepped out of the shadows and onto centre stage to deliver his second solo opus and is to be applauded and admired for doing so. Such a variety of moods, styles and colours doesn’t always mix well but when it is done with consummate skill, like it is here, you are treated to a cornucopia of musical delights. While neither ground breaking or game changing, what it is is really rather good.